Sunspear
Dorne and the location of Sunspear

Sunspear, also known as the Old Palace,[2] is the seat of House Nymeros Martell and the capital of Dorne. The castle is located on the Broken Arm, north of the Greenblood on the far southeastern coast of Westeros and is surrounded on three sides by the sea, and by the shadow city on the fourth side.[3][4] The palace of the Water Gardens lies three leagues away on the coastal road.[5]

Areo Hotah is the captain of guards for Doran Martell, while Caleotte and Myles are maesters serving House Martell. Ricasso is the castle's seneschal and Ser Manfrey Martell is its castellan. Alyse Ladybright is Sunspear's lord treasurer.[6]

Sunspear is a walled settlement, protected by three massive Winding Walls, encircling one another and containing miles of narrow alleys, hidden courts, and noisy bazaars. The Threefold Gate, where the gates are lined up one behind the other, avoids the labyrinth, instead allowing straight passage on a brick path to the Old Palace.[5]

One of Sunspear's chief structures is the original stronghold of House Martell, the Sandship,[4] which is a large, ugly, dun-colored building that looks like a dromond.[5] Over time, towers in Rhoynish fashion sprung up around the keep. Two other chief structures are the tall and slender Spear Tower and the great, domed Tower of the Sun.[5][2] The Spear Tower is a hundred and a half feet high, and can house noble prisoners.[5][7] In the Tower of the Sun, the high seats of the Prince of Dorne can be found: two twin seats, one with the Martell spear inlaid in gold upon its back, the other bearing the blazing Rhoynish sun.[5][7] These two towers are the first things visitors see when they arrive at Sunspear, whether by land or by sea.[4]

A portrait of Princess Daenerys Targaryen hangs in Sunspear.[8]

Sunspear and the Shadow City by jonathanguzi

The closest thing to a true city that the Dornishmen have, the shadow city is no more than a queer, dusty town.[5][4] Built against a wall of Sunspear, the shadow city spreads westwards. Closest to Sunspear's walls, mud-brick shops and windowless hovels can be found. Stables, inns, winesinks and pillow houses are found west of those, with walls of their own. More hovels have been build against those walls, which in has led to the city becoming a labyrinth of narrow alleys, homes, and bazaars.[5][4]

Around 400 BC, the three Winding Walls were raised,[N 1] running through the shadow city, forming a defensive curtain. Only the Threefold Gate provides a straight path to the Old Palace, allowing visitors to pass all three of the Winding Walls directly, without having to pass through the labyrinth of the shadow city.[5] If need be, these gates can be heavily defended.[4] 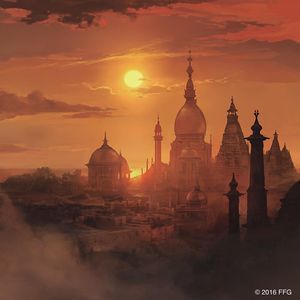 The Sandship was the ancient keep of House Martell, minor Dornish lords. When Nymeria arrived in Dorne with the ten thousand ships of the Rhoynar possibly around 700 BC,[N 2] she wed Lord Mors Martell, the Lord of the Sandship. This alliance of the Martells with the Rhoynar led to the unification of Dorne in Nymeria's War.[9]

The seat of the ruling Princes and Princesses of Dorne became Sunspear, the new castle which developed around the Sandship. It was named after the union of the Martell spear with the sun of the Rhoynar. It contains beautiful towers built in the Rhoynish fashion, such as the Spear Tower and the Tower of the Sun of the Old Palace. The Winding Walls of the castle were built around 400 BC.[4][N 1]

Queen Rhaenys Targaryen confronted Meria Martell at Sunspear during Aegon's Conquest of the Seven Kingdoms, but the Princess of Dorne refused to surrender and Rhaenys retreated from Dorne.[10]

During the First Dornish War, the Dornishmen abandoned their castles, allowing House Targaryen to take them without fighting. Meria vacated Sunspear before the arrival of King Aegon I Targaryen and Queen Rhaenys Targaryen, who found the shadow city half abandoned as well. Within Sunspear's great hall, Aegon declared that Dorne was now part of the realm ruled by the Iron Throne, and he named Lord Jon Rosby as Warden of the Sands and Castellan of Sunspear. After Aegon returned to King's Landing, however, Dorne rose in rebellion. Dornishmen swarmed in from the shadow city and Jon was killed in the Defenestration of Sunspear. Lord Harlan Tyrell marched east from the Hellholt to retake Sunspear, but his host disappeared in the red sands of Dorne.[11]

Later in the war, during the two years of the Dragon's Wroth, the Targaryens burned the Dornish castles with dragonfire, with the exception of Sunspear. Conjectures by Archmaester Timotty suggests the Targaryens did so to encourage House Martell's bannermen to turn against their overlords, although the Dornish remained loyal.[12][N 3] 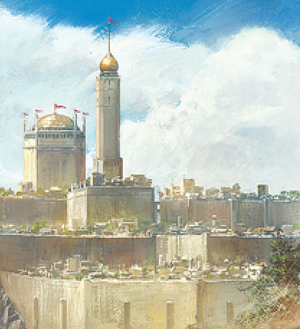 Lord Alyn Velaryon visited Sunspear during his voyage to the Sunset Sea to confront Dalton Greyjoy, Lord of the Iron Islands. Aliandra Martell, Princess of Dorne, welcomed Alyn during his stay. Dalton, the so-called Red Kraken, threatened to sack Sunspear, but he was killed at Faircastle before Alyn arrived in the west.[13]

When Alyn Oakenfist stopped at Sunspear during his return from the west, he was again greeted fondly by Aliandra. Drazenko Rogare, an envoy to Dorne, informed Alyn that his brother Lysandro held the vanished Prince Viserys II in Lys. Alyn sailed from Sunspear to the Free City to negotiate the prince's return to Westeros.[13] Drazenko eventually married Aliandra, but the envoy choked to death on bacon at Sunspear during the Lysene Spring. Some believe he was assassinated by Faceless Men.[14]

Rickon Stark, the son of Cregan Stark, Lord of Winterfell, was killed in battle outside of Sunspear in one of the final battles of the conquest of Dorne.[15] The Dornishmen surrendered to King Daeron I Targaryen, the Young Dragon, in the Submission of Sunspear in 158 AC, but they rebelled in the following years.[16] Daeron's successor, King Baelor I Targaryen, walked barefoot from King's Landing to Sunspear to forge a peace with Dorne.[17]

Dorne joined the Seven Kingdoms during the reign of King Daeron II Targaryen through the marriage of his sister Daenerys to Maron Martell, Prince of Dorne, in 187 AC.[18]

During Robert's Rebellion, Lewyn Martell was killed at the Battle of the Trident and Elia Martell was murdered in the Sack of King's Landing. Lord Jon Arryn, Hand of the King to Robert I Baratheon, traveled to Sunspear after the war to return Lewyn's bones and secure peace with Prince Doran Martell.[19][20] 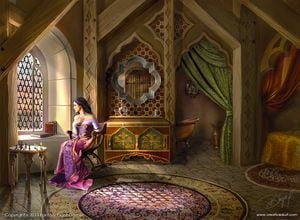 Princess Myrcella Baratheon, ward of Prince Doran Martell and betrothed to Prince Trystane Martell, has quarters in the Tower of the Sun.[3]

Following the death of his brother, Prince Oberyn, at the hands of Ser Gregor Clegane in King's Landing,[21] Prince Doran Martell orders Areo Hotah to round up the Sand Snakes,[5] with the older sisters confined in the Spear Tower and the younger ones at the Water Gardens.[7][22] Sarella remains outside of Dorne, however.[5]

After plotting to crown Myrcella as queen, Princess Arianne Martell is imprisoned for some time within the Spear Tower.[7]

Doran releases Arianne and the older Sand Snakes from the Spear Tower. Ser Balon Swann brings the Mountain's skull to the court of Doran in Sunspear.[23]

Obella Sand is sent to Sunspear to serve as cupbearer to the wife of Ser Manfrey Martell, the castle's castellan.[24]

Chapters that take place at Sunspear