The Bear and the Maiden Fair 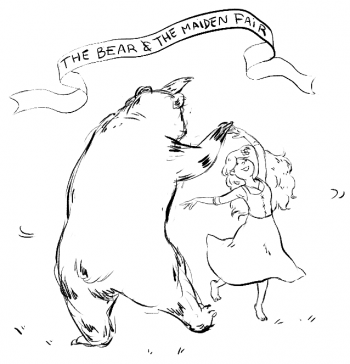 He licked the honey from her hair! by Serena Malyon. © FFG

For the television episode, see The Bear and the Maiden Fair (TV).

"The Bear and the Maiden Fair" is a ribald traditional song sung throughout the Seven Kingdoms. It describes in a humorous tone the story of a hairy bear that, while going to a fair with a band of three boys and a goat, rescues a maiden who was hoping for a knight. It is very popular, being enjoyed both by nobles and smallfolk.

A bear there was, a bear, a bear!
All black and brown, and covered with hair.
The bear! The bear!

Oh come they said, oh come to the fair!
The fair? Said he, but I'm a bear!
All black and brown, and covered with hair!

And down the road from here to there.
From here! To there!
Three boys, a goat and a dancing bear!
They danced and spun, all the way to the fair!
The fair! The fair!

The bear smelled the scent on the summer air.
The bear! The bear!
All black and brown and covered with hair!

The bear, the bear!
Lifted her high into the air!
The bear! The bear!

I called for a knight, but you're a bear!
A bear, a bear!
All black and brown and covered with hair

Then she sighed and squealed and kicked the air!
My bear! She sang. My bear so fair!
And off they went, from here to there,
The bear, the bear, and the maiden fair.[1]

Dunk heard "The Bear and the Maiden Fair" performed at the tourney at Ashford Meadow in 209 AC.[2] It was also sung by Lord Frey's nephew at the Whitewalls tourney.[3]

The song is sung at the harvest feast at Winterfell.[4]

Tom of Sevenstreams sings it with Hot Pie on the ride to the Inn of the Kneeling Man. When Tom wants someone to sing with, Hot Pie tells him he knows the song about the bear. Tom starts to sing it and Hot Pie joins in lustily, even bouncing in his saddle a little on the rhymes. The astonished Arya Stark thought Hot Pie could only bake, but he has a good voice and sings well.[5]

During the grim march back to Craster's Keep after the fight at the Fist, Grenn tries to encourage Samwell Tarly to keep marching by telling him to sing a song in his head. Sam knows a hundred songs but is so terrified he cannot think of any. Grenn suggests "The Bear and the Maiden Fair" and starts to sing it, but Sam begs him not to as it makes him think of the hideous wight-bear that had come at them at the Fist.[6]

It is sung by Butterbumps at Sansa Stark's dinner with Margaery Tyrell and Olenna Tyrell to cover the conversation about King Joffrey I Baratheon.[1]

Greatjon Umber sings it, drunkenly, at the Red Wedding, at the same time as musicians perform "Flowers of Spring".[7]

During the battle near Yunkai Ser Barristan Selmy tells Daenerys Targaryen that King Robert I Baratheon liked songs that made him laugh. Barristan adds that Robert only sang when he was drunk, and then by that point one of the songs was likely to be "The Bear and the Maiden Fair".[8]

It is sung by Dareon on the voyage to Braavos.[9]

The song is sung by Abel for Barbrey Dustin during a meal at Winterfell.[10]

In Meereen Tyrion Lannister realizes that Ser Jorah Mormont is doomed if purchased by Zahrina. Tyrion manages to get the slave overseer Nurse to convince Yezzan zo Qaggaz to purchase Jorah by lying and telling Nurse that Jorah is part of their show - the bear and the maiden fair. Jorah is the bear, Penny is the maiden, and Tyrion is the brave knight who rescues her. During their bondage Tyrion notes that Jorah has not adapted well. When called upon to play the bear and carry off the maiden fair, he has been sullen and uncooperative, shuffling lifelessly through his paces when he deigns to take part in their mummery at all.[11] 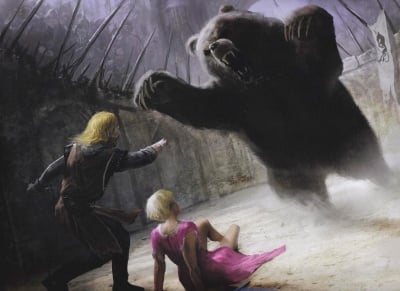 Jaime saves Brienne from the bear at Harrenhal. - by Marc Simonetti ©

The song is a motif that reflects the relationships between several characters, including Sandor Clegane and Sansa Stark, Jorah Mormont and Daenerys Targaryen, and Brienne of Tarth and Jaime Lannister (where Sandor, Jorah, and Brienne symbolize "the Bear" who either literally or figuratively saves the "Maiden Fair").

The song's relevance to Jorah and Daenerys is emphasized by the fact that a bear is the sigil of House Mormont and that fair skin and hair are ubiquitous features among the bloodline of House Targaryen.

In A Game of Thrones, Sansa is infatuated by the idea of the chivalrous prince and the knight in shining armor, archetypes which she believes are embodied by Ser Loras Tyrell and, mistakenly, Prince Joffrey Baratheon. Accordingly, when Joffrey and his court abuse and beat her, it is not the stereotypical knight but the deformed Sandor Clegane who comes to her rescue. When asked if there is any connection between Sansa's story and the song "The Bear and the Maiden Fair" George R. R. Martin replied: “Well, we´ll have to see.” [12]

After Jaime is tortured and later released from Harrenhal, the unattractive Brienne steers Jaime away from suicide and sets him on the path to redemption. Ironically, Jaime later saves Brienne from a grizzly bear in the bear pit at Harrenhal. The song also mentions a goat along with the bear, and Vargo Hoat, who is wounded by Brienne and throws her into the bear pit, is frequently referred to as 'the Goat'.