The Thousand Islands are an extensive archipelago in the eastern Shivering Sea off the northern coast of Essos. To the southwest are the Plains of the Jogos Nhai, to the south is Nefer and N'Ghai, and to the southeast is Mossovy. According to Ibbenese chartmakers, the islands are actually fewer than three hundred. The fish in the waters of the Thousand Islands are described as oddly misshapen, with a bitter and unpleasant taste.

These isles are sea-girt scatter of bleak and windswept rocks. Some believe they are the remnants of a drowned kingdom whose buildings were submerged by the rising sea thousands of years ago. Few mariners land on the islands, due to their inhabitants.[1] 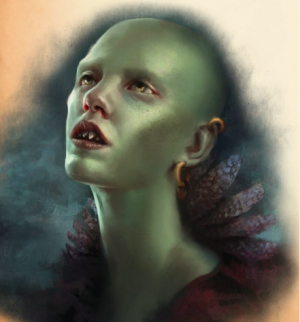 A woman of the Thousand Islands - © René Aigner

The folk that dwell on the Thousand Islands are reportedly xenophobes, inimical to strangers. They are hairless and have green-tinged skin. Females file their teeth into sharp points and males slice the foreskins of their members. They speak an unknown tongue and are said to sacrifice sailors to squamous, fish-headed gods. Likenesses of these gods are visible along the shores when the tide is low, lending credence to the theory of a civilization submerged by the rising of the sea level. Despite being islanders, the inhabitants of the Thousand Islands fear the sea so much they refuse to set foot in the water, even when threatened by death.[1]

Corlys Velaryon was the first Westerosi to navigate the Thousand Islands. After reaching them, he turned back.[4]