Difference between revisions of "Tokar" 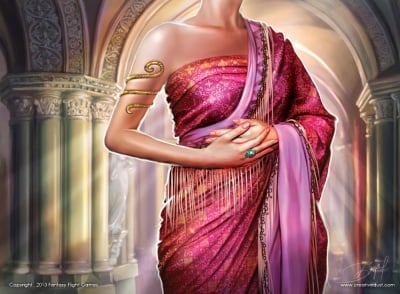 A tokar is a long, loose shapeless sheet that is worn in Ghiscari cities by the wealthy. In Astapor, only the freeborn are allowed to wear tokars.[1]

The tokar must be wound around hips and under an arm and over a shoulder to keep it on. It is wrapped this way to carefully display the dangling fringes which are usually adorned with some decoration to signify the wearer's status.[1]

If wound too loose, the tokar might unravel and fall off. If it is wound too tight, it might tangle and trip the wearer. Even if wound properly the wearer must hold the tokar in place with their left hand and walking requires small steps and great balance to prevent tripping and falling.[2]

During the fall of Astapor, Daenerys Targaryen orders her Unsullied to slay every man wearing a tokar or holding a whip. Many Good Masters trip over their garments while trying to flee.[1]

Daenerys wants to ban the tokar after her successful siege of Meereen, but her advisors convince her otherwise. Galazza Galare explains she must wear the attire of the Meereenese if she wants to be accepted as their ruler.[2] Viserion burns the tokar of Reznak mo Reznak.[2]

It was not a garment meant for any man who had to work. The tokar was a master's garment, a sign of wealth and power.[2]

Man wants to be the king o' the rabbits, he best wear a pair o' floppy ears.[2]

The bidders sat on wooden benches sipping fruit drinks. A few were being fanned by slaves. Many wore tokars, that peculiar garment beloved by the old blood of Slaver's Bay, as elegant as it was impractical.[9]