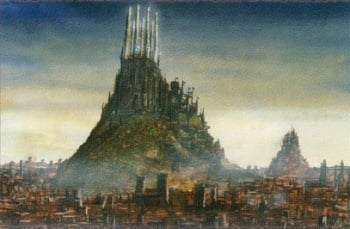 Visenya's Hill is one of the three hills that lie within the city of King's Landing, the others being the Hill of Rhaenys and Aegon's High Hill. It is named after Visenya Targaryen, a sister-queen of King Aegon I Targaryen.

Atop Visenya's Hill lies the Great Sept of Baelor,[1] while at its base are a cluster of small streets[2] and the Guildhall of the Alchemists.[3] The Street of the Sisters runs between the Hill of Rhaenys and Visenya's Hill.[1]

A grand sept was built on Visenya's Hill with funding from one of the High Septons during the reign of King Aegon I Targaryen.[4]

During the Faith Militant uprising, King Maegor I Targaryen raised the red dragon of House Targaryen atop Visenya's Hill to rally his supporters.[5]

The child Gaemon Palehair, said to be a bastard of Aegon II Targaryen, was briefly acclaimed a king during the Dance of the Dragons and made his seat at the hill's House of Kisses.[6]

Construction of the Great Sept began during the reign of Baelor I Targaryen.[7]

As her walk of atonement, Cersei Lannister walks from the Great Sept of Baelor on Visenya's Hill to the Red Keep on Aegon's High Hill.[8]