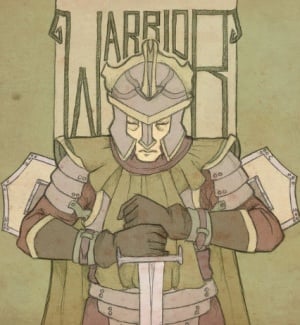 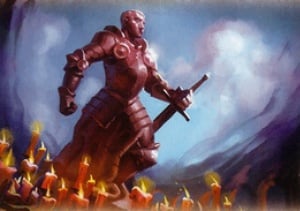 Favored by the Warrior. © FFG

The Warrior is one of the seven aspects of a single deity. Believers of the Faith of the Seven consider their god to be one with seven aspects, as the sept is a single building, with seven walls.[1]

See also: Images of the Warrior

The Warrior represents strength in battle. He is prayed to for courage and victory. He carries a sword.

A passage in the Seven-Pointed Star says that the Warrior gave strength to the arms of Hugor of the Hill's four-and-forty mighty sons.[2]

With the Valyrian steel sword Blackfyre in hand Daemon Blackfyre was said to have fought like the Warrior himself.[3]

The Noble and Puissant Order of the Warrior's Sons are an order of Knights sworn to the Faith of the Seven.[4]

Characters who favour the Warrior

Catelyn Stark prays in a nameless village’s sept. The sept is modest and has no statues of the Seven, only rough charcoal drawings to represent them. She asks the Warrior to keep Robb Stark strong and shield him in his battles.[1]

In the House of the Undying Daenerys Targaryen says a quick prayer, begging the Warrior for courage and the Dothraki horse god for strength.[10]

When Tyrion Lannister chooses Ser Arys Oakheart to go with Myrcella Baratheon to Dorne, Arys lights a candle to the Warrior in thanks.[11]

While standing vigil over his father’s body, it is revealed that the Warrior has been Jaime Lannister’s god since he was old enough to hold a sword. While other men may be fathers, sons and husbands, Jaime thinks to himself that he is a warrior, and that it is all he will ever be.[5]

Meribald tells Podrick Payne that he has never known a boy who did not love the Warrior. He remarks that he is old though, and he loves the Smith.[8]

During her imprisonment, Cersei Lannister prays to all the gods, the Warrior included, stating "Any god in a storm".[12]

In his bedchamber in the Great Pyramid Barristan Selmy keeps a beeswax candle and a small carving of the Warrior on his bedside table. Though he is not a pious man, the carving makes him feel less alone in the unfamiliar city that is Meereen.[6]

When approaching the dragons Viserion and Rhaegal, Prince Quentyn Martell prays to the Warrior for courage.[13]

The Warrior would lift his shining sword again and cleanse this sinful realm of all its evil.[4]

May the Warrior give strength to your sword arm, Brienne.[14]

In the sept they sing for the Mother's mercy but on the walls it's the Warrior they pray to, and all in silence.[15]

The Warrior stands before the foe,
protecting us where e'er we go.
With sword and shield and spear and bow,
he guards the little children.[16]