A wedding chalice is given by Mace Tyrell to Joffrey Baratheon.

The golden chalice is three feet tall and has two ornate curved handles. Each of its seven sides depicts one of the great houses in gemstones, including a ruby lion for House Lannister, an emerald rose for House Tyrell, an onyx stag for House Baratheon, a silver trout for House Tully, a blue jade falcon for House Arryn, an opal sun for House Martell, and a pearl direwolf for House Stark.[1] 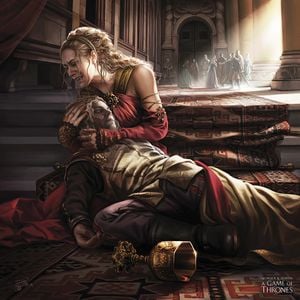 Mace Tyrell, Lord of Highgarden, gives the chalice to King Joffrey I Baratheon on the morning of his wedding to Margaery Tyrell. Since Robb Stark was slain in the Red Wedding and the ironborn have conquered parts of the north, Joffrey jokes that the direwolf on the chalice should be replaced with a squid.[1]

During the wedding feast, a cupbearer pours a flagon of Arbor red into the chalice. Joffrey uses both hands to lift the chalice when he announces the beginning of festivities, and he and Margaery share a drink from the chalice.[2] When Tyrion Lannister insults the king, Joffrey responds by pouring the chalice over his uncle, drenching Tyrion in wine. Joffrey names Tyrion as his cupbearer, but the king kicks the chalice away when Tyrion tries to retrieve it. Once Tyrion recovers the chalice from underneath the table, he refills it with a flagon from a serving girl.[2] Joffrey chokes to death while eating pigeon pie and drinking from the chalice, and Tyrion pours the remaining wine out of the chalice. Queen Cersei Lannister accuses her brother of having killed her son.[2]

Stories spread about the king's death; one tale claims that Tyrion drank Joffrey's blood from a gold chalice.[3] During Tyrion's trial for Joffrey's murder, it is testified by two serving men, a juggler, Lord Gyles Rosby, Ser Hobber Redwyne, and Ser Philip Foote that each had seen Tyrion fill the chalice. Lady Taena Merryweather states she thought she saw Tyrion put something into the wine when the pigeon pie was being cut. Lord Estermont, Josmyn Peckledon, Galyeon of Cuy, and Morros and Jothos Slynt recall Tyrion having emptied the chalice as Joffrey died.[4] Grand Maester Pycelle accuses Tyrion of having poisoned Joffrey with the strangler.[4] Lord Tyrell, one of the judges, wants Tyrion to be executed, since his daughter Margaery had also been drinking from the chalice during the feast.[4] Ser Loras Tyrell, Margaery's brother, believes that Sansa Stark was the poisoner, since she had fled from the hall and disappeared from King's Landing.[5]

While at the Fingers, Sansa learns from Lord Petyr Baelish that Joffrey had been poisoned through the efforts of Margaery's grandmother, Olenna Tyrell. Petyr indicates that Olenna had removed one of the purple amethysts from Asshai which had decorated Sansa's silver hair net, suggesting the amethyst contained poison.[6]

Mace: Seven faces for Your Grace's seven kingdoms.
Joffrey: A splendid cup, but we'll need to chip the wolf off and put a squid in its place, I think.[1]

—Mace Tyrell and Joffrey I Baratheon

The damned thing's as tall as I am. Half a chalice and Joff will be falling down drunk.[1]

Tyrion: Not every king would think to honor a humble subject by serving him from his own royal chalice. A pity the wine spilled.
Joffrey: It didn't spill. And I wasn't serving you, either.[2]

—Tyrion Lannister and Joffrey I Baratheon