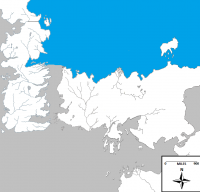 The unmapped White Waste is north of the Shivering Sea (in blue).

The White Waste is a wilderness of ice and snow located north of the Shivering Sea. According to sailors, it is ravaged by blizzards and the winds from its ice mountains scream and howl. Its shorelines fluctuate, receding in summer and expanding in winter. Shimmering lights can be seen in the north of the world.[1]

No sailors have found passage through the ice of the White Waste, either perishing in the attempt or returning half-frozen. Maester Heriston of White Harbor suggested a warm summer sea may be hidden by the White Waste.[1]

Maester Heriston's theory that a warm sea might lie beyond the White Waste mirrors commonly held theories from our own world. The Greeks and Romans believed that the temperate realm of Hyperborea lay in the distant north, and as late as the sixteenth century the famous cartographer Gerardus Mercator depicted the North Pole as lying in "an open, ice-free sea."[2]