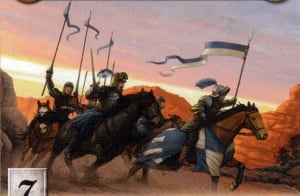 The Windblown are a mercenary company of two thousand mounted horse and foot soldiers.[1] They are found in Essos near the Free Cities. They are led by a captain known as the Tattered Prince.[2]

The Windblown's standards are fork-tailed blue-and-white banners, with streamers of pale blue silk on their lances. Their command tent is a great grey sailcloth pavilion which the Tattered Prince calls his canvas castle. It can take the Windblown less than an hour to strike camp.[2]

The men of the Windblown chose their own names, and can change them as they wish. The closest thing the Windblown have to a company tongue is classic High Valyrian.[2]

The Tattered Prince takes a dim view of deserters and deals with them harshly by sending hunters after them. If the deserters are caught, a foot might be chopped off to make sure the deserter in question can never run again. The unlucky ones are given to Meris,[2] the company torturer.[1]

The Windblown were established around 270 AC.[2] At the age of twenty-three, a nobleman, now known only as the Tattered Prince, had been selected by the magisters of Pentos to become the new Prince of Pentos in 262 AC, only hours after the previous one had been beheaded. The Tattered Prince refused their offer, however, and fled to the Disputed Lands.[2][3] He never returned to Pentos again,[2][3] but has continued to long for the city.[4][5][6] The Tattered Prince fought in the Disputed Lands as a member of the Second Sons, and later the Iron Shields and the Maiden's Men.[2] Next, together with five brothers-in-arms, the Tattered Prince founded the Windblown. By 300 AC, he was the only one of the founding members still alive.[2]

There is enmity between the Windblown and the Company of the Cat. In 299 AC the two sellsword companies had been on opposite sides of the battle lines in the Disputed Lands, and bad blood continues to linger. Bloodbeard, the leader of the Company of the Cat, has a strong dislike for the Tattered Prince, and makes no secret of this, referring to his Windblown rivals as "old greybeards in rags".[2]

The Yunkai'i contract and bring the Windblown from Volantis to fight for the Yellow City. The Yunkish Supreme Commander Yurkhaz zo Yunzak signs the Windblown's contract on behalf of the city of Yunkai.[5]

Before leaving for Yunkai four Windblown serjeants set up a trestle table outside of the Merchant's House in Volantis, calling to every passing man and boy looking for fresh meat to fill their ranks. Prince Quentyn Martell and his companions, Ser Archibald Yronwood and Ser Gerris Drinkwater, join the Windblown, pledging their sword and service to the Tattered Prince for a year, as a way to reach Queen Daenerys Targaryen in Meereen.[7][2]

To get to Yunkai the Windblown sail on an overcrowded ship tossed by wind and sea. They fight during the siege of Astapor and participate in sacking the city, after which they march for Yunkai.[2] The Tattered Prince orders two dozen of his Westerosi sellswords, Quentyn and his two companions among them, to go over to Daenerys, providing him the ability to turn his cloak later on should he wish to do so.[2]

The Westerosi contingent successfully contact Daario Naharis and offer themselves as recruits for his Stormcrows.[8] When Quentyn and his companions are introduced to Daenerys, they reveal their true purpose,[9] as well as inform Daenerys that the deserters from the Windblown were ordered to go over to her side, resulting in the arrest of the other fake deserters.[10] Daenerys eventually decides to release Meris[10] who, apparently speaking for the Tattered Prince, then offers the Windblown's support for Daenerys if they are given Pentos as payment.[10][4]

After Daenerys leaves Meereen, Quentyn contacts the Tattered Prince, requesting his aid in stealing one of the two remaining dragons. The Tattered Prince eventually agrees to help Quentyn, in exchange for Pentos.[5] Their attempt to steal the dragons coincides with Ser Barristan Selmy's plot to capture Hizdahr zo Loraq.[11][12] The Windblown arrange for a ship on which to put one of Daenerys's dragons.[6] The dragons attack Quentyn, however, and the Windblown abandon Quentyn and his companions.[12][6] Quentyn dies, and Archibald and Gerris are arrested.[6]

Barristan, acting as Hand of the Queen while Daenerys is absent, eventually sends Archibald and Gerrold to the Windblown with an offer of alliance against Yunkai. Barristan plans to release the other feigned deserters of the Windblown as well, so Archibald and Gerrold can go unnoticed in the Yunkish camps, and is willing to promise Pentos to the Tattered Prince in exchange for the safe return of the hostages given to Yunkai by Meereen.[6]

As the second siege of Meereen begins Tyrion Lannister surveys the scene and sees a column of mounted men flash past the Harridan trebuchet, flying the blue banners of the Windblown. Shortly thereafter, while the Second Sons are in a meeting, they are informed that Gorzhak zo Eraz has been slain by the Tattered Prince and the Windblown have gone over to Daenerys Targaryen.[13]

The Windblown are comprised out of two thousand men in total, both infantry and cavalry.[1] According to Dick Straw, there are three score Westerosi in the company.[2]