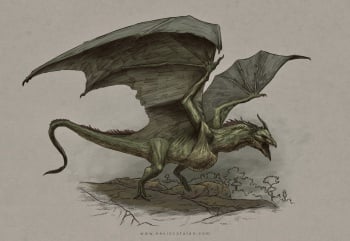 In 56 AC a report came to the small council of King Jaehaerys I Targaryen from one of Lord Rego Draz's agents, which claimed that a dragon was being displayed in the fighting pits of Astapor on Slaver's Bay. It was at the same time when King Jaehaerys was looking for dragon Balerion, on which Aerea Targaryen escaped Dragonstone two years earlier. However, Septon Barth dismissed these claims, declaring that it was without a doubt a wyvern mistaken for a dragon by people who had never seen a dragon.[8]

In British heraldry, a wyvern is defined as a winged dragon with two legs and a barbed tail.[9] In A Song of Ice and Fire, all dragons have two legs, and wyverns are considered "kin" but not a subspecies of dragon.