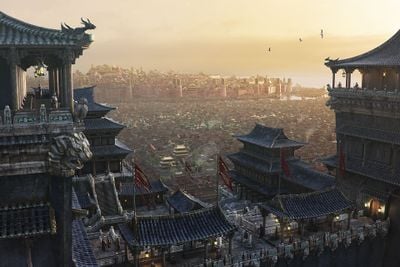 Yi Ti is a nation and region in Essos, east of Qarth and the Bone Mountains and bordered by the Jade Sea to the south. Nearby islands in the Jade Sea are Leng and the Isle of Whips. North of Yi Ti are the Great Sand Sea, the Shrinking Sea, and the Bleeding Sea; a great river runs south from the Bleeding Sea through Yi Ti to the Jade Sea. East of Yi Ti are the Mountains of the Morn, the Shadow Lands, and the city of Asshai.[1] In the Common Tongue, things relating to Yi Ti are known as "YiTish".[2][3]

The realm of the YiTish civilization is the Golden Empire of Yi Ti,[4] which was, according to legend, preceded by the Great Empire of the Dawn. Maester Yandel speculates that the YiTish civilization was contemporary with the realm of the Fisher Queens, whereas the YiTish priests insist that mankind's first towns and cities arose along the shores of the Jade Sea, dismissing the rival claims of the Sarnori and Ghiscari as the boasts of savages and children.[2]

The land of Yi Ti has thick green patchwork farmland and dense sweltering jungles.[1] Rumors have it that basilisks roam the jungles of Yi Ti.[5] There is a trade route from Asabhad to Yin along the coast of the Jade Sea.[1] The Five Forts guard the northeastern marches of the empire.[2]

Throughout Yi Ti a great web of stone roads, built during the reign of the Eunuch Emperors, ensure that travelers can cross the lands of Yi Ti without much trouble. These roads are said to be equal to the dragonroads of the Valyrian Freehold.[2]

The zorses of the Jogos Nhai have been bred by crossing regular horses with certain horselike creatures from the southern regions of Yi Ti.[6] Daenerys Targaryen remembers that basilisks infest the jungles of Yi Ti.[5]

Yi Ti has more cities than any other land in the known world, and according to Lomas Longstrider they are much larger and more splendid than cities in the west. According to Colloquo Votar there are three older cities buried beneath every YiTish city.[2]

Known cities in Yi Ti include Yin and Jinqi, along the coast of the Jade Sea, and Tiqui further to the north near the Great Sand Sea. The city of Asabhad is at the west boundary of Yi Ti near the Bone Mountains and the Jade Gates.[1] Five massive forts known as the Five Forts are along the northeastern boundaries of Yi Ti, between the Bleeding Sea and the Mountains of the Morn.[1]

Over the last two thousand years, a dozen YiTish cities and a hundred towns, and many farms and fields have been reduced to ruins by the zorseriders of the Plains of the Jogos Nhai.[6]

The people of northern Leng in the Jade Sea are YiTish, while the south of the island is inhabited by the Lengii.[7][2]

A YiTish man, by Douglas Wheatley for The World of Ice & Fire

Yi Ti was one of the earliest civilizations where literacy arose. The most ancient YiTish records are cherished and jealously guarded. Yi Ti is the oldest surviving continuous civilization in the world, having existed under one dynasty or another since the Long Night 8,000 years ago - other ancient civilizations such as the Ghiscari or Valyrians have long since collapsed. As a result their scholars tend to look down on other, younger civilizations as children and barbarians. The grand cities of Yi Ti dwarf those of Westeros or even the Free Cities.[2]

Yi Ti is ruled by a god-emperor. Lomas Longstrider once described Yi Ti as "the land of a thousand gods and a hundred princes, ruled by one god-emperor." Of old, the god-emperors were extremely wealthy and powerful, and commanded large armies. In present times, however, three men claim the title of god-emperor, while their power does not extend past the cities in which they live. Instead, the hundred princes rule their own realms as they see fit, as do the brigands, priest-kings, sorcerers, warlords, imperial generals, and tax collectors outside their domains.[2]

There are many gods in Yi Ti's religion, but two of the major ones are the Lion of Night and the Maiden-Made-of-Light[8][2] According to legend, their child was the first god-emperor of Yi Ti, the God-on-Earth.[2]

A cult of sorcerers known as the Church of Starry Wisdom supposedly originates from Yi Ti as well, hated and feared by the general population. According to legend its founder was the Bloodstone Emperor, and today its priests can be found in many cities throughout the known world.[2]

Men from Yi Ti are bright-eyed and wear monkey-tail hats.[9]

People from Yi Ti use their family name first, their personal name second - the reverse of how full names are given in Westeros and the Free Cities. For example the scarlet emperors were named "Lo Doq", "Lo Han", "Lo Bu", etc.

One of their major exports is saffron.[10] Other exporting goods include spices and silk.[11] Traders from Yi Ti travel to Vaes Dothrak to trade.[12][9] Wines from Yi Ti can be found as far west as Pentos.[13]

Yi Ti is legendarily wealthy. Its princes are said to live in houses of solid gold, and to eat sweetmeats with pearls and jade powdered over it.[2]

Braavos, Pentos, and Volantis are known to trade with Yi Ti.[14]

Yi Ti traded with the Sarnori when the Kingdom of Sarnor still existed.[15]

Great Empire of the Dawn

According to scribes of Yin, all the lands between the Jade Sea and the Shivering Sea, the Bone Mountains and the Grey Waste were part of the Great Empire of the Dawn and fell under the control of the God-on-Earth, the only son of The Lion of Night and the Maiden-Made-of-Light. He is said to have had a hundred wives and to have reigned for ten thousand years, before ascending into the stars to join his forebears. He was succeeded by his eldest son, the Pearl Emperor, who ruled for a thousand years. He was followed by the Jade Emperor, the Tourmaline Emperor, the Onyx Emperor, the Topaz Emperor, and the Opal Emperor, who all reigned for centuries. Each successive ruler had a shorter reign and faced rising problems, as mankind grew greedy and corrupt.[2]

The Opal Emperor was succeeded by his daughter, the Amethyst Empress. Her younger brother slew her and usurped the throne, and event which is remembered as the Blood Betrayal. He proclaimed himself the Bloodstone Emperor and began a reign of terror, practicing dark magical arts and necromancy. He cast down the true gods to worship a black stone which had fallen from the sky. According to the annals of the east, the Blood Betrayal is attributed as the cause of the Long Night, as it caused the Maiden-Made-of-Light to despair and turn her face away from mankind, while the Lion of Night sent the generation-long winter to punish mankind. In the chaos that followed, the Great Empire of the Dawn collapsed.[2]

According to Colloquo Votar, as recounted in his Jade Compendium, a legend from Yi Ti claims that disaster during the Long Night was only averted by "the deeds of a woman with a monkey's tail".[16]

The maesters of the Citadel in Oldtown doubt that the Great Empire of the Dawn ever truly existed, but most do agree that Yi Ti's culture is very ancient, and a few believe that they were contemporary with the Fisher Queens on the western side of the Bone Mountains.[2]

After the collapse of the Great Empire of the Dawn, the Golden Empire of Yi Ti began. Since the end of the Long Night eleven dynasties of emperors have ruled over Yi Ti, each known by a color honorific. Some of them ruled no more than half a century, but the longest ruled for seven hundred years. The transitions of power between dynasties did not always occur peacefully, and on four occasions, the end of a dynasty led to a prolonged period of civil war and anarchy. The longest of these lasted more than a hundred years.[2]

Under the sea-green emperors, Yi Ti reached the apex of its power. During the reign of god-emperor Jar Har, Leng was conquered. His sons further expanded the power of Yi Ti; Jar Joq Great Moraq, and Jar Han exacted tribute from Qarth, Old Ghis, Asshai, and other lands.[2]

Chai Duq, the fourth of the yellow emperors, married a noblewoman of Valyria, and kept a dragon at his court.[2]

Lo Han, forty-second scarlet emperor, invaded the plains three times without success, returning home after being unable to catch his enemies. After Lo Han's death, his son, Lo Bu, assembled a mighty host, supposedly of three hundred thousand men, and led his force into the plains, leaving a burning wasteland behind everywhere he went. During his campaign, millions of Jogos Nhai were killed. During the last two years of the struggle, the rival clans of the Jogos Nhai united against Lo Bu under a woman called Zhea, whose riders eventually descended upon Lo Bu's host, slaughtering them all. Lo Bu was among those slain. Zhea had his head stripped of its flesh and his skull dipped in gold, so it could serve as her drinking cup. Every jhattar of the Jogos Nhai since Zhea has drunk fermented zorse milk from Lo Bu's skull.[15]

Around 100 BC, the island Leng broke free of Yi Ti, although the northern two-thirds of the island are still under the control of the descendants of the original YiTish invaders.[15]

On the first of his nine great voyages, Corlys Velaryon sailed to Yi Ti and Leng[17] on the Sea Snake,[18] returning with such a large amount of spices, silks, and jade, which made House Velaryon the wealthiest house in the Seven Kingdoms for a while.[17]

In the present day, Yi Ti is ruled from Yin by the seventeenth azure emperor, Bu Gai. However, the amount of power he has is weak compared to older god-emperors, and the local governors and tax-collectors have carved out a hundred princedoms among the provinces. In Carcosa, on the Hidden Sea, an exiled sorcerer lord resides, who claims to be the 69th yellow emperor. In addition, a general called Pol Qo has named himself the first of the orange emperors, using Trader Town as his capital.[2]

In the Western Market of Vaes Dothrak, Daenerys Targaryen sees a fat cloth trader from Yi Ti haggling with a Pentoshi over the price of some green dye.[9]

Before Khal Drogo's body is burnt on his funeral pyre, Ser Jorah Mormont begs Daenerys to come east with him, to Yi Ti, Qarth, the Jade Sea and Asshai-by-the-Shadow, to see all the wonders yet unseen. [19]

In Qarth, Xaro Xhoan Daxos tries to entreat Daenerys to accompany him on his pleasure barge to the Jade Sea. He suggests that they journey around Yi Ti to search for the dreaming city of poets and to sip the wine of wisdom from a dead man's skull.[10]

In Meereen, Daenerys reminds Jorah that after Drogo's death he had asked her to go with him to Yi Ti and the Jade Sea.[20]

Garin tells Princess Arianne Martell that according to sailors in Planky Town, the grey plague has broken out in Yi Ti.[21]

When in the cellar of Illyrio's manse in Pentos, Tyrion Lannister notices that Illyrio Mopatis has wines from the fabled east in his stock, including wines from Yi Ti.[13]

George R. R. Martin has stated that Yi Ti is loosely a fantasy analog of Imperial China (similar to how Westeros is loosely analogous to medieval Britain)[22] or the Far East.[23] This was confirmed by Elio Garcia and Linda Antonsson, co-authors of The World of Ice & Fire.[24]