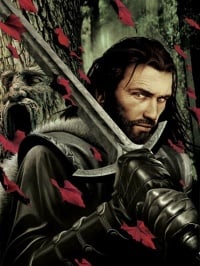 Eddard Stark, also known as Ned, is the Lord of Winterfell and the secondborn son of the late Lord Rickard Stark. Having been married to Lady Catelyn Tully since 283 AC, Ned has five children by her: Robb, Sansa, Arya, Bran, and Rickon. Ned also has a bastard son, Jon Snow, born during Robert's Rebellion.

Eddard was fostered in his youth at the Eyrie by Jon Arryn, whom he regarded as a second father, together with Robert Baratheon, whom Ned saw as a brother. When Eddard's sister Lyanna was supposedly kidnapped by Prince Rhaegar Targaryen, Ned's older brother Brandon went to King's Landing for justice, but was executed together with their father, Rickard, on the orders of the Mad King, Aerys II Targaryen. When Aerys next demanded the heads of Ned and Robert, Jon Arryn refused him and raised his banners in revolt. The war ended with Robert on the Iron Throne, though Ned arrived too late to save Lyanna, who died in his arms at the tower of joy.

Ever since Robert I's coronation, Ned Stark has served as the Warden of the North, keeping the king's peace. In 298 AC, however, Jon Arryn dies and Ned is asked by Robert to replace their former foster father as Hand of the King. Suspicious about Jon's sudden death, Ned accepts, moves to King's Landing, and starts to investigate.

Eddard is known for his unwavering sense of honor and justice. His family finds him kind and loving, although some consider his reserved personality a sign of coldness and disdain. Read more...