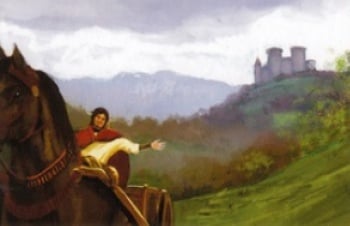 Rich lands and a keep. © FFG

A keep (from the Middle English kype) is a type of fortified tower built within castles during the Middle Ages by European nobility. Scholars have debated the scope of the word keep, but usually consider it to refer to large towers in castles that were fortified residences, used as a refuge of last resort should the rest of the castle fall to an adversary.

The first keeps were made of timber and formed a key part of the motte and bailey castles that emerged in Normandy and Anjou during the 10th century; the design spread to England as a result of the Norman invasion of 1066, and in turn spread into Wales during the second half of the 11th century and into Ireland in the 1170s. The Anglo-Normans and French rulers began to build stone keeps during the 10th and 11th centuries; these included Norman keeps, with a square or rectangular design, and circular shell keeps. Stone keeps carried considerable political as well as military importance and could take up to a decade to build.

This page uses content from the English Wikipedia. The original content was at Keep. The list of authors can be seen in the page history of Keep. As with A Wiki of Ice and Fire, the content of Wikipedia is available under the Creative Commons Attribution-ShareAlike License.