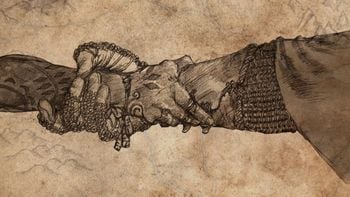 The Pact between the First Men and the children of the forest. Faces were carved on all the trees of the Gods Eye to cement the Pact agreement. © Fantasy Flight Games

The Pact of the Isle of Faces was a treaty that ended the war of the First Men and the children of the forest, an event that took place more than 10,000 years ago.

The Pact came to be after the First Men and the children of the forest fought each other to a standstill and the two races agreed to peaceful coexistence.[1] It was entered into by the greenseers and wood dancers of the children of the forest and the chiefs and heroes of the First Men on a small island in middle of the large lake, known as Gods Eye, in the riverlands. The children retained the standing forests and the First Men were able to settle the open lands i.e. the coastland, high plains, bright meadows, mountains, and bogs, while agreeing not put any more weirwoods to the axe.

Faces were carved on all the trees of the island to cement the agreement, so that the gods could bear witness to the Pact, giving its name the Isle of Faces. The sacred order of Green Men was established to maintain and keep watch over the Isle of Faces.

The signing of the Pact marked the end of the Dawn Age and the beginning of the Age of Heroes. It marked 4,000 years of friendship between men and the children.[1]

The Pact endured all through the Age of Heroes and the Long Night and the birth of the Seven Kingdoms until finally there came a time many centuries later, when Andals crossed the narrow sea.[1]