The remaining members of the Night's Watch from Castle Black and several people from Mole's Town man the Wall as Mance’s army approaches. As the Watch repels attack after attack from their great vantage point, some of the wildlings have reach the gate. To his surprise, Jon is left in command as Donal Noye leaves to defend the gate. Jon orders fire arrows and oil casks dropped on the giants and mammoths, and the defenders once again repel the wildling attack. In the aftermath of the fighting, Jon goes down into the gate tunnel, to find Donal Noye dead alongside Mag Mar Tun Doh Weg. When Jon tells Maester Aemon the news, the ancient maester tells him that he must lead the Watch now. 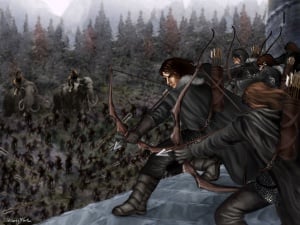 The Battle beneath the Wall by Giliberti