Castle Black and the Wall, by Ted Nasmith ©

Castle Black is the main stronghold of the Night's Watch and the seat of their Lord Commander.[1] The castle is situated along the Wall between Queensgate to the west and Oakenshield to the east, near the center of the Wall, at the northern end of the kingsroad.[2] The village of Mole's Town is located half a league to the south along the kingsroad.[3]

Despite there being nineteen strongholds along the Wall, Castle Black is one of only three still manned by the Night's Watch, the others being the Shadow Tower and Eastwatch-by-the-Sea.[3]

Castle Black is not a true castle, as it has no walls to defend it to the west, east, or south. Only the Wall stands to the north. It consists of several stone towers and timber keeps.[1] Beneath the keeps and towers, there is a series of subterranean passages which connect all of the buildings. They are rarely used during the summer, but in the winter it is the only way to travel to different parts of the castle.[4]

Castle Black has a small sept run by Septon Cellador but no godswood.[1] Men who follow the old gods can travel half a league beyond the Wall into the haunted forest, where a small grove contains a rough circle of nine weirwood heart trees.[5]

The Wall and Castle Black, by Marc Simonetti ©

There are a series of tunnels underneath Castle Black called wormwalks[4] or wormways,[12] which connect the various keeps and towers. These tunnels are mostly used during the winter, when the cold and snow, sometimes forty or fifty feet deep, make it impossible to travel above ground.[9] The large library of Castle Black lies along one of these tunnels.[4]

Beside the eastern road from Castle Black is a lichyard with the graves of some members of the Night's Watch.[9] Beside the lichyard are ancient tombs.[10] 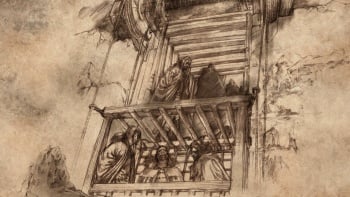 Winch elevator used to get on top of the Wall, from Game of Thrones Blu-ray

The gate guards the tunnel through the Wall, which is long, twisting and narrow. Three iron gates block the inner passage. Each of these gates is locked and has a murder hole above it. The outer door to the tunnel is solid oak, about nine inches thick.[13]

The great switchback stair climbs its way up from Castle Black to the top of the Wall. It is made of wooden stairs, anchored by huge beams frozen into the Wall itself.[13]

An iron cage attached to a winch is used to ascend and descend the face of the Wall. The cage can hold ten men[13] and is located near Castle Black's well.[3] Supplies and barrels of gravel can be transported to the top via the cage.[14]

Facilities on top of the Wall include a small warming shed for the men on watch located next to the crane.[15]

Jeor Mormont, Lord Commander of the Night's Watch, is based at Castle Black, as are Benjen Stark as First Ranger, Othell Yarwyck as First Builder, and Bowen Marsh as Lord Steward.[16] Aemon is the castle's maester, and Cellador serves as its septon.[16] Ser Alliser Thorne trains new recruits as the master-at-arms.[1]

Three-Finger Hobb is the cook at Castle Black,[6] and Donal Noye is the armorer.[1] Bass is the castle's kennelmaster.[17] Yoren, the most senior of the wandering crows, is also based out of Castle Black.[16]

Castle Black is an ancient stronghold,[1] although the Nightfort, the first castle of the Night's Watch, is said to be twice as old.[18] Castle Black at some point became the seat of the Lord Commander, taking over that role from the Nightfort[19] at least six hundred years ago.[7]

Lord Commander Lothor Burley hosted Queen Alysanne Targaryen and her dragon, Silverwing, at Castle Black in 58 AC. The dragon refused to fly over the Wall despite Alysanne's efforts.[20]

Castle Black once held over five thousand fighting men along with their servants, but that has dwindled to a tenth of that number.[1] According to Lord Commander Jeor Mormont, Castle Black now holds six hundred brothers.[3]

Craster is said to be the son of a member of the Watch and a woman from Whitetree. When the wildling tried to show their child to the Sworn Brother, she was chased away from Castle Black.[21] 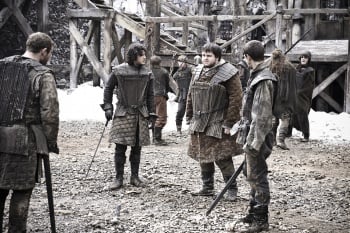 Jon Snow and Samwell Tarly are trained by Ser Alliser Thorne as recruits of the Night's Watch at Castle Black. Tyrion Lannister sleeps in the King's Tower during his visit to the Wall, while Jon sleeps in Hardin's Tower.[1] Jon and Sam swear their vows at the nearby godswood north of the Wall and are sworn in as new brothers of the Watch.[8] The bodies of Jafer Flowers and Othor, rangers killed beyond the Wall, reanimate as wights at Castle Black. The Lord Commander's Tower burns during Jon's fight with the undead Othor when it tries to kill Lord Commander Jeor Mormont.[17]

Two hundred men from Castle Black accompany Lord Commander Mormont during the great ranging north of the Wall. Maester Aemon remains at the castle because of his age. Samwell Tarly reads a report in the library about Redwyn, a brother who led a ranging to the Frozen Shore during the reign of Dorren Stark, King in the North.[4]

Jon returns to Castle Black after being wounded by wildlings at Queenscrown south of the Wall.[8] Jon and Donal Noye fortify Castle Black as best they can in anticipation of Styr, Magnar of Thenn. Styr's wildling raiders are defeated in their attack on Castle Black by a fire trap at the wooden stairs of the castle.[7]

Mance Rayder attacks the Wall with multiple waves of wildlings during the battle beneath the Wall. Jon leads the defenders atop the Wall while Donal protects the tunnel through the Wall. After the death of Donal, Aemon tells Jon that he must lead Castle Black until its garrison returns.[13] Jon is sent as an envoy to meet with Mance north of the Wall. As they converse, the knights of King Stannis Baratheon and rangers from Eastwatch appear and rout the wildling host.[22]

In the aftermath of the battle, Sam finds the common hall burned to the ground and the wooden stair a mound of broken ice and scorched timbers.[11] Stannis occupies the King's Tower, while the Lance, Hardin's Tower, the Grey Keep, the Shieldhall, and other buildings are also crowded with men. Jon is selected as the new Lord Commander to replace Jeor Mormont, who was killed at Craster's Keep.[23]

Samwell searches in Castle Black's library for information about the Others. Sam learns from Lord Commander Snow that he must escort Maester Aemon to Oldtown and then train at the Citadel to become Castle Black's new maester.[9] Because Stannis Baratheon has claimed the King's Tower, and the Lord Commander's Tower has been gutted by fire, Jon establishes himself in Donal Noye's modest quarters behind the armory.[9] 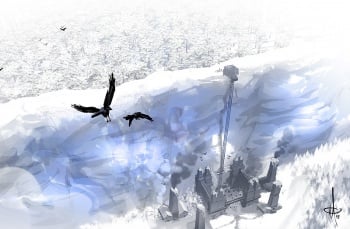 Castle Black hosts the army of King Stannis. Jon Snow executes Janos Slynt for disobedience, while Melisandre burns "Mance Rayder". Jon allows thousands of captive wildlings to cross through the Wall to Castle Black, much to the consternation of some members of the Night's Watch.[24] The officers worry there will not be enough rations for the additional mouths. Stannis departs to recruit the northern mountain clans, although Melisandre remains at Castle Black.[12] Some wildlings are recruited by Jon to help the Night's Watch defend the Wall.[25]

Queen Selyse and her queen's men stop at Castle Black on their way to the Nightfort.[26] Alys Karstark arrives seeking refuge and is married to Sigorn of Thenn by Melisandre.[27] Jon has Alys's relative Cregan Karstark imprisoned in an ice cell. Val brings Tormund Giantsbane and his four thousand wildlings to Castle Black, but Bowen Marsh and the mountain clans disapprove of the wildlings settling south of the Wall.[28]

Lord Commander Snow agrees to disperse the wildlings amongst the previously abandoned castles along the Wall.[29][10] Jon receives a belligerent letter from Ramsay Bolton and, choosing to break his vow to the Night's Watch to remain neutral, decides to go to Winterfell to confront Ramsay. As he prepares, the giant Wun Wun kills one of the queen's men, Ser Patrek of King's Mountain. While Jon is trying to make sense of the situation, he is attacked by Bowen and other members of the Night's Watch.[10]

Castle Black and the Wall in Game of Thrones

Lothor: We do what we can, Your Grace, but our beds are hard, our halls are cold, and our food—
Alysanne: —is nourishing. And that is all that I require. It will please me to eat as you do.[20]

There was scant warmth to be found in Castle Black; the walls were cold here, and the people colder.[1]

Castle Black had no defenses, but for the Wall itself. It lacked even wooden palisades or earthen dikes. The "castle" was nothing more than a cluster of towers and keeps, two-thirds of them falling into ruin.[30]