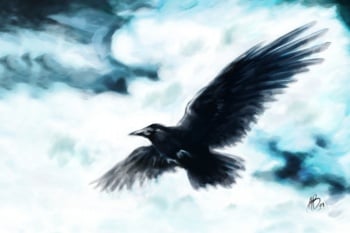 Ravens are a species of large, black-feathered birds native to Westeros. Westerosi ravens are similar to common ravens of Earth, only with better homing instincts.[1] Like carrion crows, ravens often scavenge from the dead.[2][3][4] 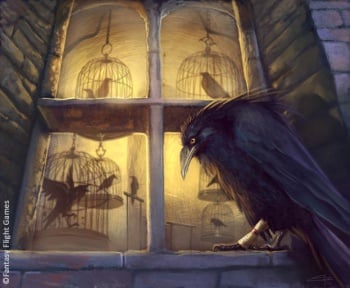 A raven in Oldtown, by Carolina Eade © Fantasy Flight Games

Ravens are used by maesters of the Citadel to carry messages between castles and other settlements. While doves and pigeons can also be trained to carry messages, ravens are stronger flyers, larger, bolder, far more clever, and better able to defend themselves against hawks.[5] Owls and hawks can still be threats to ravens, however.[6] During wartime, soldiers often attempt to shoot down messenger ravens.[7][8]

The maester of each castle usually tends to its own flock of ravens, breeding and training them.[9] Ravens sometimes imitate human speech like parrots.[10][11][12] Maesters can teach the speech of ravens.[13] Maesters raise a breed of large of white ravens at the Citadel that are said to be more intelligent and are sent out to mark the change of seasons.[11]

Most ravens are trained to fly to a specific castle, but some can be taught to fly between two castles and are therefore greatly prized. Maybe once a century, a particularly clever raven might be able to fly to as many as five castles upon command.[14]

Jeor Mormont, the Lord Commander of the Night's Watch, has a pet raven that talks.[10] Tytos Blackwood, Lord of Raventree Hall, wears a cloak of raven feathers.[19] Mance Rayder, the King-Beyond-the-Wall, wears a bronze-and-iron helm with raven wings,[20] and Bluetooth also owns a raven-winged helm.[21] Tyanna of the Tower, the mistress of whisperers to Maegor I Targaryen, was known as "the king's raven" because of her hair.[22] Lord Brynden Rivers was known as Bloodraven because of a red birthmark which some believed to resemble a raven.[23][24] Red Raven is a galley of the royal fleet.[25]

A Time for Ravens, by Trevor Cook © Fantasy Flight Games

The children of the forest taught the First Men to use ravens to communicate over long distances. The greenseers of the children could change their skins and speak through the birds. Unlike humans, ravens can speak the True Tongue, the language of the children.[26] Some priests of the Iron Islands believe that ravens are servants of the Storm God.[27] In the Faith of the Seven, the first raven is said to have been let into the world when the Crone peered through the door of death.[28]

There is a dead weirwood of colossal size in the godswood at Raventree Hall in Blackwood Vale. Every evening at dusk hundreds of ravens come and roost on the tree all night, as they have for thousands of years.[29]

Aegon the Conqueror sent a cloud of ravens from Dragonstone at the start of the Conquest.[30]

Jon Snow suggests that Samwell Tarly aid Maester Aemon because the youth is good with animals.[31]

Ser Brynden Tully has ravens from the Twins shot down to prevent Lord Walder Frey from potentially informing Lord Tywin Lannister of the movements of Robb Stark.[7]

Since Cressen is no longer able to climb to the rookery, Pylos attends the ravens at Dragonstone.[11] When he announces his claim to the Iron Throne, Stannis Baratheon has Pylos send forth all one hundred seventeen ravens from Dragonstone.[32]

Ravens are sent to Pyke from Robb at Riverrun and from Lord Jason Mallister at Seagard, but Lord Balon Greyjoy does not respond.[33]

Samwell tends to two cages of ravens during the great ranging of the Night's Watch as they venture beyond the Wall.[34]

Ravens from Luwin's rookery and crows from the broken tower feast on corpses after the sack of Winterfell.[35] 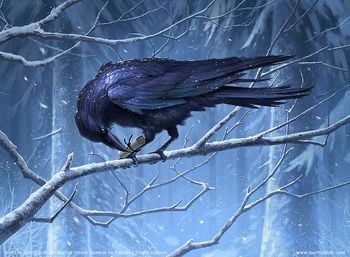 A raven fails to deliver its message, by Joel Hustak © Fantasy Flight Games

Sam releases the caged ravens during the fight at the Fist, but he forgets to attach messages to them.[36] While retreating to the Wall, he and Gilly are attacked by wights at a village. Hundreds of ravens fly from the village's weirwood and attack the wights, however, and the pair are rescued by Coldhands.[37][38]

During the election of the new Lord Commander, Mormont's raven flies from a kettle, lands by Jon Snow, and says the word "snow". The inspired men of the Night's Watch soon select Jon as their new leader.[39]

Following the battle beneath the Wall, Sam sends ravens from Castle Black to northern lords on behalf of Stannis.[40]

Queen Regent Cersei Lannister has ravens sent throughout the Seven Kingdoms offering lordship to whomever brings her the head of her brother, Tyrion Lannister, who has been convicted of the death of their father, Lord Tywin.[41]

Lord Roose Bolton sends ravens throughout the north summoning lords to Barrowton for the wedding of Ramsay Bolton and "Arya Stark",[42] although the wedding is eventually moved to Winterfell.[43] Theon Greyjoy spots ravens in the godswood of Winterfell, with the birds thickest at its weirwood.[4]

As Coldhands escorts Bran Stark and his companions north through the haunted forest to the cave of the three-eyed crow, the murder of ravens with the ranger gradually dwindles.[44][45] A cloud of ravens appears from the cave when Leaf rescues the party from wights.[45] The three-eyed crow teaches Bran how to enter the minds of ravens as a skinchanger.[26] While in Summer, Bran sees ravens among the dead creatures outside of the cave.[26]

Two ravens are shot down by Black Balaq's archers during the taking of Griffin's Roost.[46] 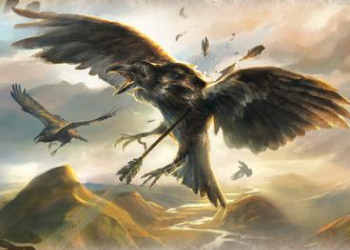 By Sword or By Guile, by Antonio Maínez © Fantasy Flight Games

Dark wings, dark words, Old Nan always said, and of late the messenger ravens had been proving the truth of the proverb.[47]

Catelyn: Theon, when you return to my uncle, tell him he is to place his best bowmen around the Twins, day and night, with orders to bring down any raven they see leaving the battlements. I want no birds bringing word of my son's movements to Lord Tywin.
Theon: Ser Brynden has seen to it already, my lady. A few more blackbirds, and we should have enough to bake a pie. I'll save you their feathers for a hat.[7]

Most ravens will eat grain, but they prefer flesh. It makes them strong, and I fear they relish the taste of blood. In that they are like men ... and like men, not all ravens are alike. Doves and pigeons can also be trained to carry messages, though the raven is a stronger flyer, larger, bolder, far more clever, better able to defend itself against hawks ... yet ravens are black, and they eat the dead, so some godly men abhor them.[5]

The crow is the raven's poor cousin. They are both beggars in black, hated and misunderstood.[5]

Varys: I bring dire tidings.
Tyrion: You ought to dress in black feathers, Varys, you're as bad an omen as any raven.[48]

It was the singers who taught the First Men to send messages by raven ... but in those days, the birds would speak the words. The trees remember, but men forget, and so now they write the messages on parchment and tie them round the feet of birds who have never shared their skin.[26]

Huginn and Muninn, the messengers of the Norse god Odin, are an inspiration for ravens in A Song of Ice and Fire.[1]