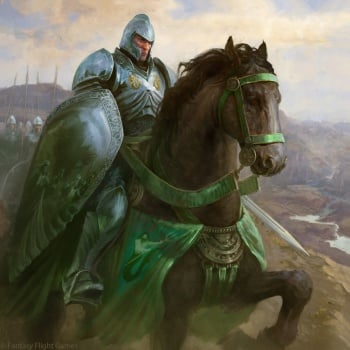 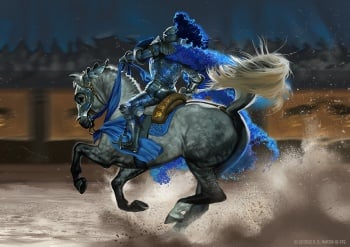 A courser of the north by Dimitri Bielak © Fantasy Flight Games
For the builder of the Night's Watch nicknamed Horse, see Hareth (Mole's Town)

Horses are four-legged mammals of the known world. They are used for transportation, in combat, as a patrimonial resource, and as a symbol of status.

Classification by breed and use 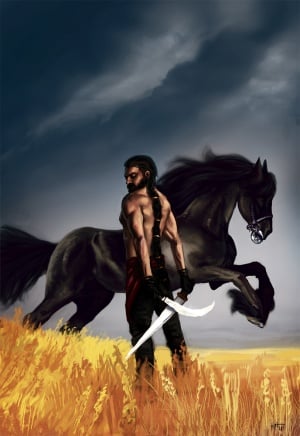 Horses are highly valued by most cultures in Westeros and Essos.

In the Seven Kingdoms, a knight is expected to be able to afford armor and a warhorse.[16]

The Night's Watch and the free folk employ sure-footed little garrons beyond the Wall.[17][18][19] Some knights ride destriers, although most rangers prefer garrons.[20]

Dorne is famed by its valued sand steeds, beautiful and valued horses.[4]

Horses are barely used in the Iron Islands, not only due to their basic island geography, but also because the isles are too sparse to provide them good grazing, and too rocky for easy travel even on the same island. Most ironborn are indifferent riders at best. The few horses that are encountered in the Iron Islands tend to be either garrons (bred to be sure-footed on rocky terrain) or "shaggy Harlaw ponies" (apparently bred to survive on meager grazing). Even drays are not as common as ox-pulled carts.[21]

Horse archers are more common in Essos than in Westeros.[22]

The Qohorik are said to sacrifice horses, bullocks, and calves to the Black Goat.[23]

Volantene chariots are pulled by teams of four horses.[24]

The Dothraki measure wealth largely by the possession of horses, and spend most of their lives riding them. The horse is in the heart of the lives of Dothraki, who are sometimes called "horselords". For Dothraki the horse is a mount and an inspiration for all craft. They worship a horse god.[25]

The nomadic lifestyle, as well as many cultural taboos are directly associated with the horse. The Dothraki fear the ocean, as their horses cannot drink salt water.[26] Persons unable to ride are looked down upon in Dothraki culture, and riding capability is associated with social prestige.[25]

At the death of a Dothraki, his horse is slaughtered and later sacrificed on the funeral pyre of his master.[27] The Dothraki consume almost exclusively horse meat, which they prefer to beef and pork,[28] and to it they attribute many properties, especially for pregnant women. They drink a low alcohol beverage derived from fermented mare's milk.[29] The Dothraki consider boats to be wooden horses.[26]

In antiquity, the grasslands of central Essos are said to have populated by centaurs.[30] The Sarnori used chariots pulled by bloodred horses, but they were defeated by the Dothraki.[30]

Horses were first brought to Westeros by the First Men, who traveled across the Arm of Dorne.[31] The First Men used horses and bronze weapons and armor against the children of the forest.[32] According to Old Nan, the Others rode pale dead horses during the Long Night.[33]

Some knights never name their horses. That way, when they die in battle, the grief is not so hard to bear. There are always more horses to be had, but it's hard to lose a faithful friend.[34]

—Duncan the Tall to Aegon Targaryen

Destriers were trained to kick and bite. In war they were a weapon, like the men who rode them.[35]