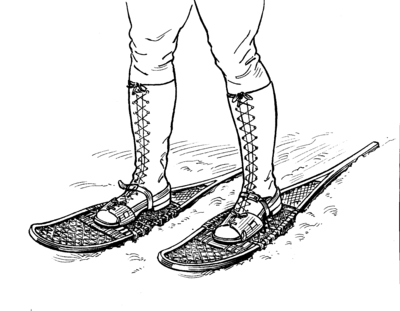 A person wearing bear-paws to walk atop snow

Bear-paws is the term used by the members of the northern mountain clans to refer to the real-world snowshoe, named after the paws of bears.[1]

Bear-paws are elongated objects, made with bent wood and leather strips, and are lashed onto the bottoms of boots. This allows the wearers to walk on top of snow without breaking through the crust. Some clansmen even have bear-paws made for their horses to wear on their hooves.[1] Bear-paws are also used beyond the Wall by the free folk.[2]

During the march on Winterfell, Asha Greyjoy sees the northmen putting on bear-paws. At first she judges them as strange things, but she quickly realizes how useful they are when she sees the northmen easily outpassing Stannis Baratheon's southron knights. The knights try to put bear-paws on their horses, but the palfreys and destriers refuse to move, or try to shake them off their feet. One destrier breaks an ankle trying to walk in them.[1]

The bear-paws make the march much easier for the northmen, which allows them to remain more healthy than the southerners once they reach the crofters' village.[3]

Jon Snow sees lads of the free folk wearing bear-paws as they pass through the Wall, walking atop the snowdrifts without sinking through.[2]