Tyrion Lannister finds he is being taken to the Eyrie instead of Winterfell, which will fool any attempt to rescue him. His attempts to convince Lady Catelyn of his innocence are interrupted when the Vale mountain clans attack. During the fight, Tyrion saves Catelyn and afterwards he explains that Littlefinger’s accusation has a hole: Tyrion would never bet against his family.

As Tyrion watches the sellsword Chiggen butcher his horse he chalks up another debt owed to the Starks. The mare was a gift from his brother Jaime for his twenty-third name day. The sellsword Bronn tells Tyrion that none of them will go hungry, but Tyrion replies that he does not like eating horse, particularly his own horse. Bronn responds that the Dothraki like horse better than other meats. Tyrion reflects that maybe his horse is the lucky one, since he has many more cold hard days ahead of him. As he walks away from the sellswords, Tyrion thinks back bitterly to the night at the inn.

When they took him captive his guard Jyck had gone for his sword, but Tyrion had stopped him, knowing it would only get them killed. Lady Catelyn showed the wounds on her hands all around, claiming they had been caused by Tyrion's dagger during an attack on her son. All the people in the inn, who had been friendly enough before, started screaming for his death. With only his men Jyck and Morrec to defend him, Tyrion had no choice but to surrender; his other companion Yoren, being of the Night's Watch, was sworn to take no part in such matters.

The Mountains of the Moon -- Tysen Johnson. © FFG

Lady Catelyn stated, often and loudly, that they were taking Tyrion to Winterfell for justice. Tyrion had looked over the crowd and seen that things were not as bad as they seemed. Of the roughly fifty men in the common room, Catelyn Stark roused only a bare dozen. He announced that anyone who reported his capture to his father would get a rich reward. Ser Rodrik then ordered the crowd to remain silent, and had Tyrion struggled not to laugh at the thought that Ser Rodrik was fool enough to believe they would.

Lady Catelyn then asked for help in bringing Tyrion to Winterfell, and was rewarded with several recruits. As they bundled him out of the inn he was not afraid, sure that they would never get him to Winterfell. Then they pulled a hood over his eyes and made a hard gallop through the rain away from the inn.

It was dawn and the rain had stopped when they finally pulled the hood off and Tyrion saw they were on the high road to the Eyrie, not the kingsroad to Winterfell, and lost hope. Any pursuit would be looking in the wrong direction and these were the lands of the late Jon Arryn, and his wife Lysa was a Tully. What was more galling than the abduction was that Lady Catelyn had outwitted him.

He was spared the hood after that, and after the second night they no longer bound his hands. Still later, they hardly bothered to guard him at all; there was nowhere for him to go. The terrain was harsh and wild and the road no more than a stony track, and the mountains contained shadowcats and the dangerous Vale mountain clans.

As they travel, Tyrion makes sure to remember the names of all his captors so that he can properly pay them back: “A Lannister always pays his debt.” He has a particular enmity towards the singer Marillion, whom he blames for the whole mess, and who is currently looking for words that rhyme with “imp” for a song about this adventure.

Catelyn, Ser Rodrik, and several others are discussing their situation and the pursuit by the Lannisters when Tyrion breaks in with the comment that there is small chance that the pursuit will catch them. Kurleket snaps that Catelyn did not ask his views, but Catelyn allows him to speak. Tyrion explains any pursuit will be heading up the Neck, not towards the Eyrie. He states that they will find no help until they reach the Vale, and that at their current pace they will only lose more mounts, which burdens the others more. The pace could also very likely cause Tyrion’s death, which Catelyn obviously does not desire. Catelyn replies that Starks are not murderers, and Tyrion states he is also no murderer. He follows up by telling her that he is not stupid, and would not arm a common footpad with his own blade.

For a moment, Tyrion can see doubt in Catelyn’s eyes, but she asks why Littlefinger would lie. Tyrion replies that lying is in Littlefinger’s nature and mentions how the man often boasts of taking Catelyn’s maidenhood, which Catelyn angrily denies. She calls Tyrion an evil man, but Tyrion calls her a fool, continuing on to say that Littlefinger only loves Littlefinger and was only interested in sex with her. Kurleket puts a knife to Tyrion’s throat and asks if he can bleed him, but Catelyn again tells him to let Tyrion talk. Tyrion asks how Littlefinger claims he obtained the blade. Catelyn explains that he won the dagger from Littlefinger at the tourney where the Knight of Flowers unhorsed his brother.

The cry of a lookout interrupts them, alerting them to incoming riders, and Catelyn immediately arranges the defense. Tyrion screams to Catelyn to arm him and his serving men, because she will need every man. Both he and Catelyn know that the mountain clans—who are perfectly happy to slaughter each other—will slaughter Lannister and Stark alike. Lharys slides down the ridge with the news that there are around 25 men: Milk Snakes or Moon Brothers. Ser Willis Wode asks Marillion for help with his breastplate, but the singer freezes with fear. Instead, Morrec springs to his assistance.

Tyrion pleads again with Catelyn, insisting that she cannot afford to waste men guarding them. At her request, he gives his word that he will put down the weapons when the fight is finished, and she orders them armed. Morrec arms himself with a bow, being better with it than a sword, and Bronn offers Tyrion a double-bladed axe. When Tyrion comments on his inexperience with an axe, Bronn tells him to pretend he is splitting logs. 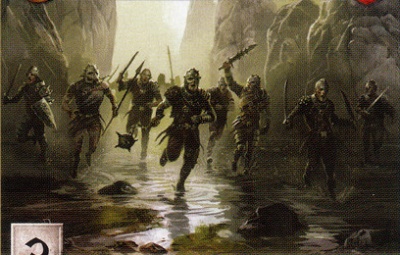 Tyrion joins Marillion in his hiding place. Marillion whines that he is a singer and wants no part of the fight, but Tyrion forces his way in. The clansmen boil into sight, armed with a wide variety of weapons and led by a towering man in a shadowskin cloak armed with a greatsword. The knights and sellswords meet the charge. As the others shout “Winterfell” and “Harrenhal”, Tyrion has to repress an urge to stand up and shout "Casterly Rock”. From his hiding spot, Tyrion sees Bronn charge through the clansmen, cutting through foes right and left, while Ser Rodrik hammers the leader. Marillion shrieks when a rider leaps over them. When the rider turns, Tyrion charges and cuts the horse’s neck so that the rider and his horse fall together on top of Marillion. Tyrion then buries his axe in the man’s neck and uses this opportunity to crush Marillion’s fingers with a boot.

For the rest of the battle, Tyrion keeps on the fringes, leaping out to cut at the legs of horses and kill wounded men, taking a helm from one. Tyrion watches Jyck get himself killed, then comes across Kurleket’s body and helps himself to the man’s dagger. Then he hears a woman scream. Tyrion goes to aid Lady Catelyn even as he thinks that he should let them have her. Tyrion gets the first man in the knee and Catelyn kills a second as he reels from a blow by Tyrion. The third man makes a quick retreat, and the fighting is over.

As Bronn helps himself to Jyck’s boots, he asks if this is Tyrion's first fight, which Tyrion confirms. Bronn then tells him that he needs a woman now; nothing like a woman after a man’s been bloodied. Glancing over to Lady Catelyn, who is dressing Ser Rodrik’s wound, Tyrion quips that he is willing if she is.

Ser Willis Wode urges that they must proceed in haste before more clansmen arrive, but Lady Catelyn wishes to pause to bury the dead. When Ser Willis points out that the soil is too stony for graves Catelyn suggest they gather stones for cairns. Bronn tells Catelyn that she can do as she likes, but that he and Chiggen have better things to do than pile rocks, such as breathing. When Ser Rodrik agrees with Bronn, an angry Lady Catelyn agrees and they ride on. Now there are plenty of horses. As Tyrion mounts Jyck’s horse, Lharys demands the dirk Tyrion took from Kurleket’s body, but Catelyn intercedes, telling them to give him back his axe as well.

Tyrion is pleased to learn that Marillion the singer has broken several ribs, four fingers, and lost his harp. Tyrion is less pleased to find Marillion has also acquired the magnificent shadowskin cloak. The singer, for once, has nothing to say, and Tyrion can see him cringe when they hear shadowcats fighting over the bodies they left behind. He trots up to the singer and taunts that “craven” rhymes nicely with “raven.” Then he moves up to ride next to Lady Catelyn. Picking up the conversation from before their interruption, Tyrion points out that there is a serious flaw in Littlefinger’s story: he never bets against his family.