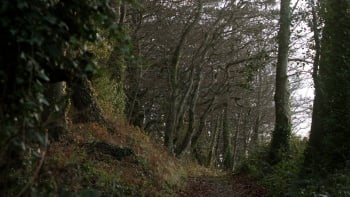 The high road in Game of Thrones

The high road[1] or eastern road[2] is the sole pass through the Mountains of the Moon to the Bloody Gate and on to the Eyrie in the Vale of Arryn.[3] The path is steep and stony[4] and can be closed by snow.[5] 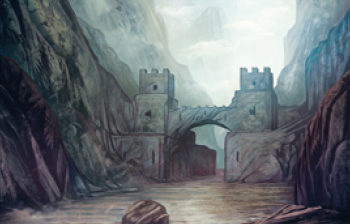 West of the Mountains of the Moon, the high road meets the inn at the crossroads in the riverlands, where it connects with the river road running west and the kingsroad running north and south.[6] The high road is more dangerous than these other roads.[2]

The high road runs east from the crossroads through foothills and forests toward the mountains of the Vale of Arryn. Towers of unmortared stone are located among the foothills, and one defensive location consists of an earthen wall four feet high closing off the road between two rocky outcrops.[7] Once among the mountains, travelers must be wary of deep chasms and rock slides as they navigate the high passes, and they also risk being attacked by wild mountain clansmen and shadowcats.[2][1][8]

In parts the high road is just a stony track.[1] The mountain pass opens up after the Bloody Gate, descending two miles on a winding path to the Vale proper below, with the Gates of the Moon and the Eyrie nearby at the Giant's Lance.[9]

The high road has seen much blood spilled throughout history.[4]

An army five thousand strong led by Ser Robert Rowan was sent by the Iron Throne to restore order in the Vale of Arryn after a succession conflict broke out there upon the death of Jeyne Arryn, Lady of the Eyrie. Believing the Mountains of the Moon would be passable with the coming of spring, Robert's host took the high road to enter the Vale. On the march, the column struggled through deep snows and was attacked by mountain clans. Benjicot Blackwood, Lord of Raventree Hall, assumed command after Robert was crushed by a boulder toppled by clansmen.[8]

During the Great Spring Sickness, Donnel Arryn, Lord of the Eyrie ordered the Vale of Arryn sealed off, shutting down traffic from the high road and the narrow sea to prevent the illness from spreading into the region.[10][4] 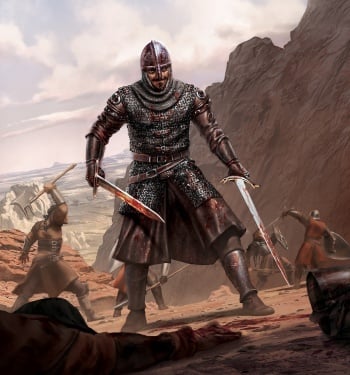 Catelyn Stark takes Tyrion Lannister captive at the inn at the crossroads. He is deceived into thinking she will take him to Winterfell, but he is blindfolded and finds they are instead on the high road to the Vale of Arryn.[1] Catelyn's party is forced to defend themselves when they are attacked on the high road by twenty-some clansmen, possibly from the Milk Snakes or Moon Brothers. Jyck, Kurleket, and Mohor are slain in the attack, as are nine clansmen.[1] Catelyn's party is attacked by more clansmen on the next night,[9] with Lharys and Chiggen dying and Morrec then succumbing to a fever.[9][11] The travelers are eventually escorted to the Bloody Gate by a band of riders led by Ser Donnel Waynwood.[9]

After Bronn slays Ser Vardis Egen in Tyrion's trial by combat, Lady Lysa Arryn is forced to release the prisoner from the Eyrie. When Lysa orders her guards to escort Tyrion back to the high road, Catelyn believes it to be a death sentence in all but name.[12] Ser Lyn Corbray leads Tyrion and Bronn to the Bloody Gate, forbidding them from returning to the Vale. A band of clansmen approach Tyrion and Bronn when the travelers are camped at night near the high road. In return for safe travel through the mountains, Tyrion promises the wildlings armament so they can conquer the Vale.[11]

Tyrion leads a larger group of clansmen westward through the mountains, and he descends to meet the host of his father, Lord Tywin Lannister, at the crossroads inn.[7]

Catelyn learns that Tyrion has survived his journey on the high road, and has come back to King's Landing.[13]

Robb Stark, King in the North, is hopeful his aunt Lysa, who has not cooperated with him in the War of the Five Kings so far, will at least allow him to march his army on the high road to Gulltown, where they can take ship to return to the north. According to Catelyn and Ser Brynden Tully, however, Lysa will refuse Robb.[14]

Sandor Clegane tries to bring Arya Stark to her aunt Lysa at the Eyrie, but they turn back when a village elder in the foothills warns them of inclement weather, shadowcats, and mountain clans watching the high road.[15]

The high road to the Vale has been closed because of snowfall.[5]

The eastern road was wilder and more dangerous, climbing through rocky foothills and thick forests into the Mountains of the Moon, past high passes and deep chasms to the Vale of Arryn and the stony Fingers beyond.[2]

When he saw the narrow stony road, the foothills rising high and wild all around them, and the jagged snowcapped peaks on the distant horizon, all the hope went out of him in a rush.[1]

Donnel: My lady, you should have sent word of your coming. We would have sent an escort. The high road is not as safe as it once was, for a party as small as yours.
Catelyn: We learned that to our sorrow, Ser Donnel.[9]