Green Fork
The riverlands and the location of the Green Fork

The Green Fork is one of the three main rivers of the Trident in the riverlands, the other two being the Blue Fork and the Red Fork. The river is named after its murky green color,[1] which comes from moss near its swampy source.[2]

The headwaters of the Green Fork are located in the southern marshes of the Neck, with Greywater Watch on an eastern headwater. The two largest tributaries come together just north of the Twins, where the Green Fork runs deep and swift.[3] The river flows to the southeast, with the kingsroad roughly parallel for much of its course. Nearby are fertile valleys, green woodlands, thriving towns, and stout holdfasts and castles.[4]

Further south the Green Fork is joined by a tributary which originates in the Mountains of the Moon and is crossed by the kingsroad.[5] South of this confluence the Green Fork is joined by first the Blue Fork and then the Red Fork, forming the Trident. The great River Trident flows south and then east past Lord Harroway's Town, the kingsroad, and the ruby ford to the Bay of Crabs.[5]

According to Robb Stark, there is no crossing of the Green Fork north of the ruby ford until the Twins,[6] although there is a ferry over the Trident at Harroway.[7]

The Green Fork and the Twins, by © Marc Simonetti

About six hundred years ago, the Freys began construction of a bridge spanning the northern Green Fork, where it runs high and fast.[3]

The ironborn under the Kings of the Isles and the Rivers used the Trident and its tributaries to quickly traverse the riverlands.[8]

During Aegon's Conquest, Lady Sharra Arryn offered Aegon the Conqueror an alliance in return for the lands between the Green Fork and the Mountains of the Moon, but she was declined.[9]

King Jaehaerys I Targaryen ordered construction of the kingsroad along the Green Fork in 62 AC.[10]

Sweetwillow on the Green Fork was attacked by Prince Aemond Targaryen and his dragon Vhagar during the Dance of the Dragons.[11]

Ser Franklyn Frey was well regarded along the Green Fork.[12]

Robb Stark marches the northern army to the Twins, where an alliance between Houses Stark and Frey is concluded.[3] Robb crosses the Green Fork with the northern horse and heads toward Riverrun, while Lord Roose Bolton marches south with the northern foot along the eastern bank of the river.[6]

Tyrion Lannister notices blackened fields and burned holdfasts near the Green Fork.[13] He meets the camp follower Shae amongst the host of his father, Lord Tywin Lannister. Tywin defeats Roose in the battle on the Green Fork.[14]

Ser Brynden Tully reports that fighting has spread across the Trident almost to the Twins.[15] 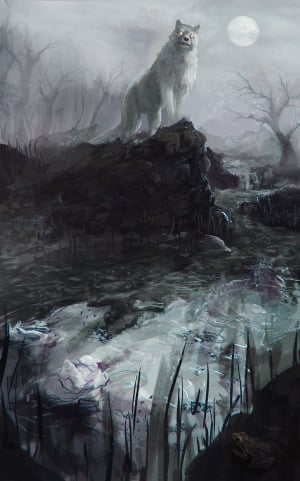 Nymeria finds the body of Catelyn Stark, by GibiLynx ©

Meera Reed tells Bran Stark of the Knight of the Laughing Tree and of a crannogman who paddled a little skin boat down the Green Fork.[16]

The river is swollen when Robb, now King of the Trident, and his army return to the Twins for the wedding of Lord Edmure Tully to Roslin Frey.[1] Robb and his forces are then betrayed in the Red Wedding; the wounded Ser Raynald Westerling is last seen throwing himself into the river.[17] Afterward, Catelyn Tully's naked corpse is dumped into the river by the Freys in mockery of House Tully's funeral custom.[18]

Lem hunts the Mad Dog of Saltpans, who had been spotted making his way north along the Green Fork, but Rorge's former Brave Companions instead double back for the crossroads.[20]

A blanket of pale mist still clung to the surface of the water, the murky green current swirling past underneath. The shallows were muddy and choked with reeds.[14]

They heard the Green Fork before they saw it, an endless susurrus, like the growl of some great beast.[1]

The music grew louder as they approached the castle, but under that was a deeper, darker sound: the river, the swollen Green Fork, growling like a lion in its den.[21]