Inn of the Kneeling Man

The Inn of the Kneeling Man is an inn in the riverlands located near the spot where Torrhen Stark, King in the North, is said to have bent the knee to Aegon the Conqueror during Aegon's Conquest.[1]

The main building sits along the shore where the Red Fork of the Trident bends. It has long, low wings that stretch out along the river. The lower story is made of grey stone, the upper one of whitewashed wood, and the roof is slate.[1] The building has thick, diamond-shaped windowpanes and a cellar.[1] The common room has tables, a hearth, along with the kitchen.[2]

The inn is surrounded by outbuildings, including stables. Behind it is an arbor with apples trees and a small garden.[1] The inn brews a fine ale, and cider is also available.[1]

Swinging from an iron post at the end of the inn's wooden dock is a flaking shingle painted to depict Torrhen Stark kneeling with his hands together in submission.[1] A painted sign of the king is also located above the inn's door.[2]

A cottage and a village are located about two miles and six miles east of the inn, respectively.[1][2] Ser Warren's towerhouse is located south of the village.[1]

Torrhen Stark, King in the North, came south with his forces during Aegon's Conquest to oppose House Targaryen. After receiving the submission of Highgarden, Aegon I Targaryen led his host north to confront the northmen. Torrhen's scouts had seen the aftermath of the burning of Harrenhal, and the King in the North had heard of Aegon's victory at the Field of Fire. Once at the Trident, Torrhen saw Aegon's larger host and the three dragons of the Targaryens, Balerion, Meraxes, and Vhagar. Instead of fighting, the Starks and Targaryens negotiated.[3] The inn is said to be built where Torrhen submitted[1] on the south bank of the Trident.[3] 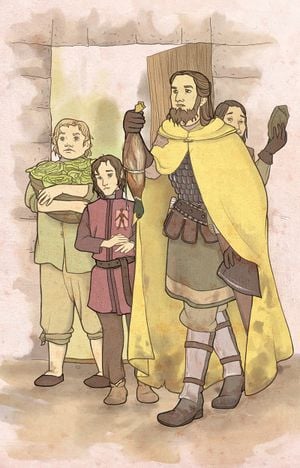 Brienne of Tarth, Ser Cleos Frey, and Ser Jaime Lannister stop at the inn on their way from Riverrun to King's Landing. They meet a man, Husband, who has taken over duties at the inn, although he denies being an innkeep. The trio also meet a crossbow-wielding boy adopted by the man. The man says that he and his wife had buried the previous innkeep and his family out back. The man's wife, Sharna, is not there at that time. The travelers are served horse steak, fried onions, stale oatcakes, ale, and cider. After the meal, Brienne overpays the man for three horses but refuses to stay the night. She also disregards his advice on choice of roads, suspecting him to be in league with bandits and leading them to ambush.[1]

After Arya Stark is captured by the brotherhood without banners, Tom of Sevenstreams says that Sharna is the new innkeep, and the outlaws bring "Squab" to the inn. Hot Pie is pleased to have ale and rabbit. Alarmed when Gendry announces that soldiers are approaching, Arya breaks Lem's nose with her tankard of ale. Her true identity is revealed when she is recognized by Harwin, one of the returning outlaws and a former Stark guardsman.[2] Hot Pie remains at the inn to help Sharna bake; the youth asks Arya to visit once the War of the Five Kings has ended.[4]

Jaime: We could not have found a better inn.


Brienne: Is this some special place?


Cleos: This is the Inn of the Kneeling Man, my lady. It stands upon the very spot where the last King in the North knelt before Aegon the Conqueror to offer his submission.[1]
—Jaime Lannister, Brienne Tarth, and Cleos Frey

There's an inn not far ahead kept by some friends of ours. We could share some ale and a bite of bread, instead of fighting one another.[2]

—Tom of Sevenstreams to Arya Stark

It did not look like an outlaws' lair, she had to admit; it looked friendly, even homey, with its whitewashed upper story and slate roof and the smoke curling up lazy from its chimney.[2]

Chapters that take place at the Inn