Torrhen Stark, known as the King Who Knelt, was a head of House Stark who reigned as King in the North until Aegon I Targaryen invaded Westeros with his dragons. He was named Lord of Winterfell and Warden of the North after submitting to Aegon during the War of Conquest.[1]

After the riverlands and Storm's End had fallen under the control of Aegon the Conqueror, Torrhen Stark called his banners. He was aware that, due to the vast distance of the North, it would take a long time to assemble his army. After the Field of Fire, whilst at Highgarden, Aegon I learned that Torrhen had crossed the Neck and entered the riverlands, leading an army of thirty thousand men. Aegon I abandoned his plans to march south, and at once started his way north, racing ahead of his army on Balerion. Both Rhaenys and Visenya Targaryen, as well as all the lords who had bent the knee to Aegon after Harrenhal and the Field of Fire, were sent word of this movement. So when Torrhen reached the banks of the Trident, he found a host of forty-five thousand men and three dragons waiting for him.[2] 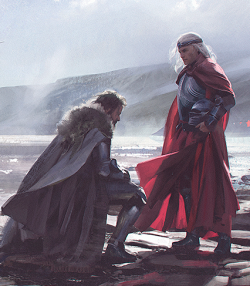 Torrhen Stark kneels before Aegon I Targaryen, as depicted by Chase Stone in The World of Ice & Fire.

Torrhen's scouts had reported seeing the ruins of Harrenhal, and Torrhen had heard accounts of the Field of Fire as well. Some of his lords urged him to attack, but he realized that a similar fate would await him, if he tried to force a crossing. Others of his lords urged the King of the North to fall back to Moat Cailin, to make his stand there. Torrhen's bastard half-brother, Brandon Snow, offered to cross the Trident at dark, to kill the dragons.[2]

In the end, Torrhen sent Brandon Snow to Aegon's camp, with three maesters, to treat with Aegon. The whole night, messages went back and forth, and the next morning, Torrhen crossed the Trident, where he knelt and laid his crown at the feet of Aegon I Targaryen, and swore fealty. For his surrender, he was named the Lord of Winterfell and Warden of the North.[3][2] Ever since, Torrhen is known as the King Who Knelt.[2] It is unknown what Aegon did with Torrhen's crown.[4] The Inn of the Kneeling Man later arose where Torrhen had bent the knee.[5]

Reign of Aegon I

After Torrhen's surrender, the Company of the Rose, a sellsword company, was formed by men and (according to some accounts) women from the North who refused to bend the knee to Aegon I Targaryen. These men and women willingly chose exile across the Narrow Sea.[6]

Torrhen's sons did not agree with the Targaryen rule. Some of them spoke of rebelling, and raising the Stark banner.[7] Whether Torrhen gave his consent or not is unknown. No rebellions by House Stark are known thus far.

Lord Torrhen's daughter was married to Ronnel Arryn, Lord of the Eyrie.[7][8] This marriage had been arranged by Queen Rhaenys Targaryen, as an attempt to knit the new realm together. There are letters at the Citadel which suggest that Lord Stark only agreed to this match after much protest, and that his sons had refused to attend the wedding.[7] Lord Ronnel would be killed early in the reign of King Aenys I Targaryen by his own brother, Jonos.[8][9] It is unknown whether Torrhen's daughter was still alive at this point.

Torrhen was entombed in the crypts of Winterfell after his death.[3]

Torrhen had several sons and at least one daughter.[7]