Moat Cailin
The north and the location of Moat Cailin

Moat Cailin, sometimes called the Moat,[1] is an ancient stronghold of the First Men[2] on the northern edge of the great swamp known as the Neck, in the south of the north. It is less than twenty miles from the headwaters of the Fever River.[3] Moat Cailin is one of the north's most important strongholds, though much of it now stands in ruins. It commands the causeway, the safe route for armies to travel through the swamps of the Neck.[4]

Moat Cailin is an effective natural choke point which has protected the north from southron invasion for thousands of years. The crannogmen of the Neck know unmapped routes through the swamps, such as narrow trails between the bogs and wet roads through the reeds that only boats can follow.[5]

Moat Cailin was once a great stronghold, with twenty towers, a wooden keep, and a great basalt curtain wall as high as that of Winterfell's. Today only great blocks of black basalt lay scattered about, half sunk in the ground where the wall once stood, and the keep rotted away.[4][6]

The remaining three towers, which are covered with green moss[4] and white ghostskin,[6] command the causeway from all sides so that enemies must pass between them. Attackers face constant fire from the other towers should they attempt to attack any one tower, wading through chest deep water and crossing a moat full of lizard-lions.[4] 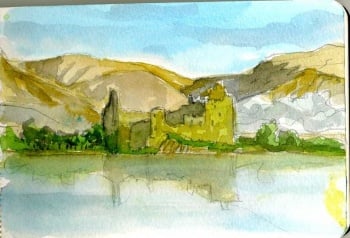 Raised by the ancient First Men,[7] it is claimed that Moat Cailin has defended against southern invasions for ten thousand years.[8]

According to myth, the greenseers of the children of the forest worked dark magic at Moat Cailin.[9] From the Children's Tower,[4] they are said to have used the hammer of the waters on the Neck[10] to break Westeros in two,[6] separating the north from the south in the same manner they shattered the Arm of Dorne. The children failed and only succeeded in flooding it, however, creating bogs and swamps. Some scholars discount the legend, instead attributing the watery landscape to natural events.[9]

The Marsh Kings and their crannogmen held Moat Cailin—sometimes with the assistance of the Barrow Kings, Red Kings, and Kings of Winter—against all attacks from the south.[11] The swampy terrain was enough to prevent Moat Cailin from falling during the coming of the Andals to Westeros. It was a key defense of the north[12] against which the Andal armies threw themselves time after time with no success. The Kings of Winter from House Stark eventually defeated the Marsh Kings, adding Moat Cailin to the realm of Winterfell.[12]

The wooden keep rotted away "a thousand years past".[N 1] The three remaining towers are more than capable of defending the passage to the south, however, provided that they are fully manned.[4] Moat Cailin has never been taken from the south, although it is vulnerable from the north and the east.[1]

During Aegon's Conquest, some northern lords urged King Torrhen Stark to resist House Targaryen at Moat Cailin.[13] Rather than fight the Targaryen dragons, however, Torrhen instead submitted to Aegon I Targaryen at the Trident, becoming the King Who Knelt.[14] Lord Eddard Stark, the Hand of the King to Robert I Baratheon, instructs his wife Catelyn to have Ser Helman Tallhart and Galbart Glover fortify Moat Cailin with a hundred bowmen each.[15]

On the march south from Winterfell after Eddard's arrest in King's Landing, Robb Stark takes the Gatehouse Tower as his seat, Greatjon Umber takes the Children's Tower for his, and Rickard Karstark uses the Drunkard's Tower. Robb's mother, Catelyn Stark, and great-uncle, Ser Brynden Tully, join him at Moat Cailin with the levies of House Manderly, but the northmen run low on supplies.[4] Robb leaves a small force of mostly archers to hold the Moat,[4] while the rest of his army continues south toward the Twins.[16]

Victarion Greyjoy, Lord Captain of the Iron Fleet, is sent by his brother Balon, Lord of the Iron Islands, to take Moat Cailin. Instead of marching from the south, the ironborn sail up the Saltspear and the Fever River[3] and attack Moat Cailin from the west.[17]

After Theon Greyjoy captures Winterfell and declares himself the Prince of Winterfell, Maester Luwin councils Theon that holding Jojen and Meera Reed as hostages will stay the hand of their father, Lord Howland Reed, the liege of the local crannogmen.[10]

At Hag's Mire, upon receiving the news of Balon's death at Pyke from the captain of the Myraham, Robb plans to march on Moat Cailin. Robb intends for Howland's crannogmen to lead northmen through the swamps of the Neck, so the ironborn-held Moat Cailin can be attacked from the south and the north.[5] 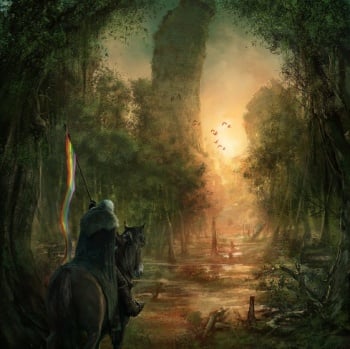 Upon hearing of Balon's death and the return of his hated brother, Euron, Victarion leaves a token force to defend Moat Cailin under the command of Ralf Kenning and returns to the Iron Islands with his fleet to decide on the succession.[18] The ironborn garrison is weakened by crannogmen attacks.[19][18]

Euron is crowned King of the Isles and the North during the kingsmoot,[20] and he commands Victarion to travel to Slaver's Bay with the Iron Fleet to bring back Daenerys Targaryen. Victarion sets sail, leaving behind his unknowing loyal garrison at Moat Cailin.[21]

Queen Regent Cersei Lannister expects that Ramsay Bolton, the son of the new Warden of the North, Lord Roose Bolton, will wed Arya Stark after the ironborn lose control of Moat Cailin.[22]

Men from Houses Ryswell and Dustin surprise the remaining ironmen on the Fever River and burn their longships, cutting off the garrison of Moat Cailin from naval support.[23]

During the siege of Moat Cailin, Ramsay sends his captive, Theon Greyjoy, to offer the weakened ironborn garrison food and safe passage if they surrender unarmed. Theon negotiates their surrender, but Ramsay has all of the ironborn flayed and displayed along the causeway. Ramsay and Theon later meet the returning northern host of Lord Bolton and his Frey allies at Moat Cailin.[6]

With the fall of Moat Cailin, Tristifer Botley advises Asha Greyjoy to abandon Deepwood Motte. They are soon after captured by Stannis Baratheon.[24][25]

Brynden: This is Moat Cailin? It's no more than a—
Catelyn: —death trap.[4]

It's said that the old Kings in the North could stand at Moat Cailin and throw back hosts ten times the size of their own.[4]

The battle for the north will be fought amidst the ruins of Moat Cailin.[8]

Robb will never look on Winterfell again. He will break himself on Moat Cailin, as every southron army has done for ten thousand years.[8]

The ironmen control the sunset sea. The Greyjoys hold Moat Cailin as well. No army has ever taken Moat Cailin from the south. Even to march against it is madness. We could be trapped on the causeway, with the ironborn before us and angry Freys at our backs.[26]