Rickard Karstark is the Lord of Karhold and head of House Karstark. He has three sons, Harrion, Eddard, and Torrhen, and one daughter, Alys.

Rickard is gaunt and tall, with a thick grey[2] beard and hair loose past his shoulders.[3][4] He has a narrow face.[2]

Lord Karstark is a stern and vengeful man.[5][6]

A fierce warrior,[1][7] Rickard wears black mail[2] and wields a lance on horseback.[8] He possesses a black wool surcoat emblazoned with the Karstark sunburst.[6]

Named after Lord Rickard Stark.[6] Rickard Karstark fought for his son, Lord Eddard Stark, when the north rebelled against the Mad King, Aerys II Targaryen, during Robert's Rebellion. He participated in the Battle of the Trident.[6]

Rickard visited Winterfell with his daughter, Alys, when she was six. He expected her to charm Eddard's son Robb, despite Alys's age, in hopes of arranging a betrothal.[9]

Lord Rickard brings his forces to Winterfell when Robb Stark calls his banners. He is accompanied by his three sons, Harrion, Eddard, and Torrhen.[10] At Moat Cailin he occupies the Drunkard's Tower.[11] When the northern host splits at the Twins, Rickard stays with Robb. He takes part in the battle in the Whispering Wood, but Rickard's younger sons, Torrhen and Eddard, are killed by Ser Jaime Lannister during the fighting.[3]

Following the Battle of the Camps, Rickard prays to the old gods in the godswood of Riverrun. During Robb's war council, Rickard objects to ransoming the captive Jaime back to his father, Lord Tywin Lannister. Rickard swears fealty to Robb when Lord Greatjon Umber declares him King in the North.[5]

Rickard storms out of the Great Hall of Riverrun when King Robb explains his terms for peace with the Iron Throne.[4]

Rickard accompanies Robb when the king campaigns in the westerlands. During the Battle of Oxcross, the Lord of Karhold rides down Ser Stafford Lannister, the commander of a Lannister host, and kills him with his lance.[8] Rickard and Galbart Glover then lead the raiding along the westerlands coast.[12] 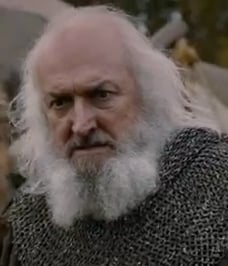 John Stahl as Rickard in Game of Thrones

After learning of the capture of Winterfell, Catelyn Stark releases Jaime Lannister from captivity at Riverrun.[13][14] When Robb's host returns from the westerlands, Lord Karstark considers the actions of Robb's mother to be treason.[2]

Lord Rickard, overcome with grief and anger, sends the Karstark horse from Riverrun, promising the hand of his daughter, Alys, to anyone who recovers Jaime for him.[6][15] Afterward, Rickard leads a small group of Karstark men to murder Willem Lannister and Tion Frey, two of Robb's captives from the Whispering Wood, in their cells at Riverrun. Two guards, Delp and Elwood, are slain by Karstarks.[6]

Ser Edmure Tully advises Robb to keep Rickard as a hostage, but the king declares Lord Karstark a traitor and sentences him to die. Following the teachings of his father, the late Lord Eddard Stark, Robb carries out the sentence himself, beheading Rickard before the heart tree in Riverrun's godswood. With his last breath Rickard curses Robb, denouncing him as his king and calling him a kinslayer, citing the blood ties between Stark and Karstark in hopes of saving his own life.[N 1] Rickard is succeeded by his sole surviving son, Harrion.[6] Lothar Frey refers to Rickard's fate as "swift sure justice".[16]

The Brave Companions capture Jaime near Maidenpool. Unaware of Rickard's death, Vargo Hoat plans to return Jaime to the Karstarks and thereby marry Alys and claim Karhold.[17][15] Lord Roose Bolton instead leaves Harrenhal to Vargo when he departs.[18] When Roose arrives at the Twins, most of the remaining northmen in his command are Boltons and Karstarks.[19] Roose then betrays Robb in the Red Wedding.[20]

Ser Daven Lannister had vowed not to cut his hair until he had avenged the death of his father, Stafford, at Rickard's hands. Daven decides to keep his hair long even after Rickard's execution.[22]

With Harrion in captivity, Rickard's uncle Arnolf, castellan of Karhold, attempts to claim by the castle by marrying his son Cregan to Rickard's daughter, Alys. The maiden flees to Castle Black first, however.[9]

Rickard: You are the gentle sex. A man has a need for vengeance.
Catelyn: Give me Cersei Lannister, Lord Karstark, and you would see how gentle a woman can be.[5]

Any man who steps between a father and his vengeance asks for death.[6]

How can it be treason to kill Lannisters, when it is not treason to free them? Has Your Grace forgotten that we are at war with Casterly Rock? In war you kill your enemies. Didn't your father teach you that, boy?[6]

Robb: This is my work, he dies at my word. He must die by my hand.
Rickard: For that much, I thank you. But for naught else. The blood of the First Men flows in my veins as much as yours, boy. You would do well to remember that. I was named for your grandfather. I raised my banners against King Aerys for your father, and against King Joffrey for you. At Oxcross and the Whispering Wood and in the Battle of the Camps, I rode beside you, and I stood with Lord Eddard on the Trident. We are kin, Stark and Karstark.[6]

Old gods or new, it makes no matter, no man is so accursed as the kinslayer.[6]

You cannot afford to seem indecisive in front of men like Roose Bolton and Rickard Karstark. Make no mistake, Robb—these are your bannermen, not your friends.[11]

Lord Rickard Karstark, gaunt and hollow-eyed in his grief, took his seat like a man in a nightmare, his long beard uncombed and unwashed.[5]

Rickard Karstark killed more than a Frey and a Lannister. He killed my honor.[6]

My father never bellowed like the Greatjon, but he was no less dangerous in his wroth.[9]