Battle of the Trident

The Battle of the Trident was the battle that ultimately determined the outcome of Robert's Rebellion. The battle was fought between rebel and royal troops at the Trident, across what would thereafter be known as the ruby ford. It ended in a victory for the rebels.

After Lord Jon Connington's defeat in the Battle of the Bells, King Aerys II Targaryen at last realized that the rebellion was a major threat to House Targaryen, perhaps the greatest threat to the dynasty since Daemon Blackfyre.[3] Lord Robert Baratheon left Stoney Sept for Riverrun, where Lords Jon Arryn and Eddard Stark married the daughters of Lord Hoster Tully. Around the time of the Trident, Robert announced his claim for the Iron Throne[4] and led the combined Arryn, Baratheon, Stark, and Tully host of rebels.[5]

Aerys's heir, Crown Prince Rhaegar Targaryen, returned from Dorne to take command of the royalist army.[6] King Aerys gracelessly reminded the Martells that Princess Elia was in his power and dispatched her uncle, Prince Lewyn Martell of the Kingsguard, to assume command of ten thousand Dornishmen marching up the kingsroad, and joined them to Rhaegar's royalist army en route to the Trident. At the same time, Ser Barristan Selmy and Ser Jonothor Darry of the Kingsguard were sent to rally the scattered forces of Lord Connington. Additionally, Rhaegar persuaded his father to ask for help from his old Hand of the King, Lord Tywin Lannister.[3]

Led by the loyalist lords Mace Tyrell and Paxter Redwyne, the Redwyne fleet and most levies from the Reach were at the siege of Storm's End. Some of Mace's men joined Rhaegar's host, however.[1]

The army of the rebels consisted of:

The army of the House Targaryen royalists consisted of:

The Targaryen host had nearly forty thousand men, with at most a tenth of them knights. The rest were archers, freeriders, and foot soldiers consisting of spearmen and pikemen.[2] The royalists were more numerous, but the rebels were more battle hardened.[19] 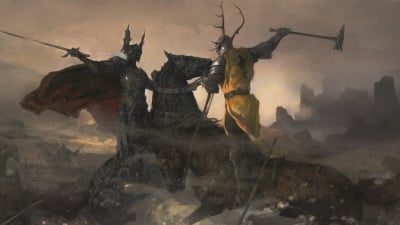 The Battle of the Trident as depicted by Justin Sweet in The World of Ice & Fire.

The battle took place at the crossing of the Trident that would later be known as the ruby ford,[20] as Rhaegar tried to cross the river.[21] Robert Baratheon used his booming voice to command during the fighting.[22]

The Dornishmen, under the command of Prince Lewyn Martell, threatened Robert's left flank. Ser Lyn Corbray, picking up his wounded father's sword, Lady Forlorn, led a charge and broke the Dornishmen. During the charge Lyn killed the already-injured Lewyn.[12]

Though many great lords and knights either lost their lives or made names for themselves in the fighting, the battle was decided when Robert and Rhaegar met in single combat on horseback in the stream. Robert eventually crushed Rhaegar's chest with a blow of his warhammer. The blow was so hard that the rubies adorning Rhaegar's armor were shattered free to litter the river, giving the ruby ford its name.[20] Leaderless, the royal army broke and fled[2] back to King's Landing.[23]

Barristan was close to death when he was brought before Robert. Although he was counseled to kill him by Lord Roose Bolton, Robert spared Barristan's life and sent his own maester to tend to his wounds.[7] Lord Wyman Manderly granted the Wolf's Den to Ser Bartimus as a reward for saving his life during the battle.[9] Both sons of Mors "Crowfood" Umber were killed at the Trident,[11] and Lord Grandison died a year later from wounds sustained in the fighting.[24] The son of Lord Goodbrook made peace with Lord Hoster Tully and Robert.[16]

The battle was the decisive engagement of the war. Walder Frey arrived after the battle was over, so Lord Hoster Tully has since called him "the Late Lord Frey" and questioned his loyalty.[17] When King's Landing learned of Prince Rhaegar's death, King Aerys II Targaryen sent the pregnant Queen Rhaella with Prince Viserys to Dragonstone. Aerys kept Elia Martell and her children at the Red Keep as a threat against Doran Martell, Prince of Dorne, since the Mad King thought he had been betrayed by Prince Lewyn at the Trident.[3]

The way to King's Landing was now open for the rebels, while the only significant loyalist force left was invested in the siege of Storm's End. The rebels also learned that Lord Tywin Lannister was heading toward King's Landing. Lord Robert Baratheon had been wounded during the battle, so Lord Eddard Stark led Robert's vanguard down the kingsroad towards the capital, racing to reach it before the Lannisters.[23] Tywin arrived first, however, and Grand Maester Pycelle convinced the Mad King to open the city gates, resulting in the Sack of King's Landing.[3] Robert succeeded Aerys on the Iron Throne.

While in the House of the Undying in Qarth, Rhaegar Targaryen's sister, Daenerys, has a vision of a dying prince sinking to his knees in water and murmuring a woman's name as he dies.[25]

Daenerys Targaryen dreams she is Rhaegar at the Trident. She flies atop a dragon and melts the ice-armored host of the Usurper with dragonfire.[26]

The battle screamed about Lord Robert and Prince Rhaegar both, and by the will of the gods, or by chance-or perhaps by design-they met amidst the shallows of the ford. The two knights fought valiantly upon their destriers, according to all accounts. For despite his crimes, Prince Rhaegar was no coward.[19]

Eddard: Do you remember the Trident, Your Grace?
Robert: I won my crown there. How should I forget it?[23]

Eddard: You avenged Lyanna at the Trident.
Robert: That did not bring her back. The gods be damned. It was a hollow victory they gave me. A crown ...[23]

Robert won the tourney of the Trident. He overthrew Prince Rhaegar and named me his queen of love and beauty.[27]