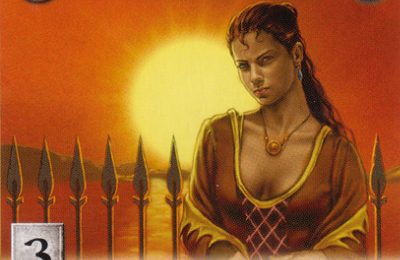 Dornishmen are the natives of Dorne in the southernmost part of Westeros. They have a reputation for hot-bloodedness and sexual licentiousness.[1][2] They are viewed with some mistrust and rivalry by the people of the Dornish Marches in the neighboring stormlands[3] and the Reach.[4] Dornish bastards of noble origin are given the surname Sand. In Dorne, the descent from the Rhoynar is strongest. The Rhoynar were a slender people with smooth olive skin, black hair and dark eyes. Their impact on the Dornish gene pool is strongest along the coast, and grows faint farther inland. Dornishmen with more Andal and First Men blood are larger and fairer than those with more Rhoynish blood.[4]

According to King Daeron I Targaryen's observations during his wars in Dorne, there are three groups of Dornishmen:

Additionally, a fourth, smaller group exists. The orphans of the Greenblood are pure Rhoynar who ply the Greenblood in poleboats. Despite attempts by the Red Princes to extirpate it by outlawing it, they are said to still speak the Rhoynish language discretely.[2] 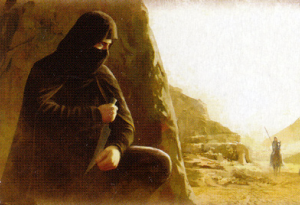 An assassin in Dorne, by Igor Kieryluk © Fantasy Flight Games

Dornish culture has First Men and Andal origins, but is also strongly influenced by the mass immigration of the Rhoynar who settled in Dorne during the Rhoynar migration. Their influence can be observed in many Dornish customs,[14] including the laws of inheritance. In Dorne, unlike the other six kingdoms, no distinction is made between sons and daughters. Instead, children inherit in order of birth regardless of gender, as per Rhoynish custom.[15] In the case of an inheriting female, her last name will be passed on to her children, instead of the name of her husband.[16][17]

Furthermore, views on bastardy are milder in Dorne compared to the rest of Westeros. Especially when a child is born to a paramour, the Dornish are not greatly concerned if a child is born in wedlock or out of it.[2] Many lords and some ladies in Dorne have paramours,[2][14] and homosexuality is more accepted.[2]

The Dornish speak the Common Tongue, as does the rest of the Seven Kingdoms. But unlike in the other kingdoms, their speech is marked by the influences of the language of the Rhoynar.[18][2] This influence can be found all over Dorne,[18] but most strongly among the salty Dornishmen,[2] who have the most Rhoynish blood.[5] The Dornish speak with a Dornish drawl,[19][20][21] stretching, rolling, or lilting some words.[2] Some describe the Dornish speech as charming.[2] The Marcher lords often claim to find the Dornish accent impossible to understand, however.[2]

The Dornish primarily follow the Faith of the Seven,[22] although red temples of the Lord of Light, R'hllor, can also be found within Dorne.[22] Dornish armor is heavily enameled and inlaid with burnished copper, shining silver, and soft red gold,[4] with cloaks over it to keep the sun off.[22] Similarly, it is Dornish fashion to wrap helmets in long scarfs, to prevent the sun from beating down upon it.[4][12][22]

When crossing the deserts of Dorne during daytime, veils are used to keep the sands out of their faces.[12]

Dornish prefer spicy food.[23] Snake sauce preferably has a drop of venom in it, as well as mustard seeds and dragon peppers.[1] The Dornish produce their own wines, often called "Dornish reds".[18] These wines are generally sour,[24] though they occasionally can be more rich of taste.[25][26][27] Strongwines from Dorne are as dark as blood, with a sweet taste.[23] 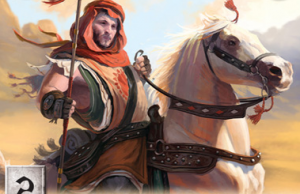 Fabled are the Dornish sand steeds. These horses are slim and swift, with elegant heads, long necks, and flowing manes.[13][4] They are considered to be the most beautiful horses in the Seven Kingdoms.[28] They are smaller than regular warhorses and lightboned, and so are unable to bear the weight of armor.[4][28] However, they can run for near two days and a night before tiring,[4] needing only a few drinks of water over the course of a day and a night.[28]

The least populous of the Seven Kingdoms,[9] the Dornish seem to favor different tactics in battle than the rest of the realm. The warm climate of Dorne and the scarcity of water in the desert make the movement and supply of a large army difficult. This has proven to have been an advantage during wars, as many hosts which have entered Dorne over time have withered and broiled on the hot red Dornish sands.[12][5] For example, many of the men from Lord Harlen Tyrell's host died of sun and thirst during their march on Hellholt during the First Dornish War.[29]

The Dornish have not been a seafaring culture since Princess Nymeria's burning of her ships,[8] with Sunspear never being a sea power.[30] Dornishmen have a reputation for using poison.[31]

The Dornish have often fought across the Red Mountains and the Dornish Marches with the Reach and the stormlands.[32] The Dornish fought House Targaryen in several wars, including the First Dornish War and the conquest of Dorne. They finally joined the Seven Kingdoms during the reign of King Daeron II Targaryen. The presence of Dornishmen in Daeron's court was one of the causes of the First Blackfyre Rebellion, however.[13][33] 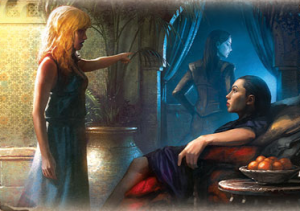 Seeking vengeance for their father's death, the elder Sand Snakes want to raise Dorne in rebellion.[22]

George R. R. Martin has acknowledged that historical influences for Dorne include Palestine, Spain, and Wales.[35]

The Dornishmen burn to avenge Elia and her children.[36]

Dornishmen and Highgardeners had never had great love for one another; over the centuries, they had fought border wars beyond count, and raided back and forth across mountains and marches even when at peace.[32]

Of late the king had been repeating little jests about the Dornish that he'd picked up from Mace Tyrell's men-at-arms. How many Dornishmen does it take to shoe a horse? Nine. One to do the shoeing, and eight to lift the horse up. Somehow Tyrion did not think Doran Martell would find that amusing.[4]

How many Dornishmen does it take to start a war? he asked himself. Only one.[4]

Arya: Dornishmen lie, don't they?
Anguy: They're famous for it. Of course, they say the same of us marchers, so there you are.[3]

Dornishmen fight best at home, so I say let us hone our spears and wait. When the Lannisters and the Tyrells come down on us, we shall bleed them in the passes and bury them beneath the blowing sands, as we have a hundred times before.[22]

Remember, she is Dornish. In the Reach men said it was the food that made Dornishmen so hot-tempered and their women so wild and wanton. Fiery peppers and strange spices heat the blood, she cannot help herself.[1]

Dornishmen are notoriously stubborn, Your Grace. Prince Quentyn's forebears fought your own for the better part of two hundred years.[30]

All Dornishmen were snakes, and the Martells were the worst of them.[37]