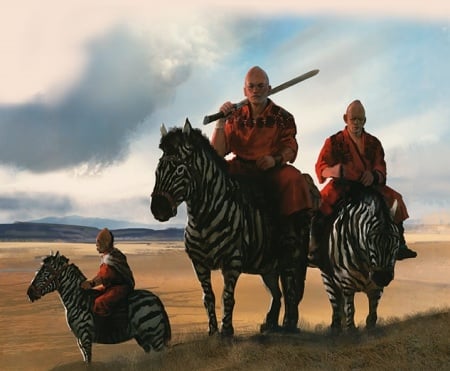 The Jogos Nhai are a people of Essos who live east of the Bone Mountains on the plains of the Jogos Nhai, which lie north of Yi Ti and the Shrinking Sea.[1]

Jogos Nhai are as a rule, a head shorter than the Dothraki and are described as squat, bowlegged, and swarthy, with large heads, small faces, and sallow-colored skin. Men and women both have pointed skulls, a result of the custom of binding the heads of their newborn during the first two years of life.[2]

The Jogos Nhai are a nomadic people who live in yurts, tents, and saddles. They are a proud, warlike race who prize freedom above all and are never content to remain in once place for long.[2]

Besides their custom of skull modification, the Jogos Nhai shave their heads but for a single strip of hair down the center of the skull, while women go wholly bald and are said to scrape all the hair even from their pubic area.[2]

The Jogos Nhai are also renowned for their zorses.[3] These mounts are the result of breeding horses with another horse-like species from the southern region of Yi Ti and the isle of Leng.[2]

They travel in small bands closely connected by blood. Each one is commanded by a jhat, or war chief, and a moonsinger, who combines the roles of priestess, healer, and judge. The jhat leads in war, battle, and raid, whereas other matters are ruled by the band's moonsinger. There are also female jhats and male moonsingers, but girls who choose the warrior's way are expected to dress and live as men, whereas boys who choose to become moonsingers must dress and live as women, making it difficult to tell apart when such cases take place.[2]

Unlike the Dothraki khalasars, Jogos Nhai bands do not make war upon one another, as their gods forbid them to shed the blood of their own people. Young men do ride out to steal goats, zorses, and dogs from other bands, while girls go forth to abduct husbands, but these are rituals hallowed by the gods, during which no blood may be shed. However, the Jogos Nhai do live in a perpetual state of warfare against all their neighboring peoples.[2]

The religion of the moonsingers is prominent among them.[4]

Legend claims the Jogos Nhai, led by their jhattar - the jhat of jhats and war leader of all their people - Gharak Squint-Eye, slew the last of the Jhogwin at the Battle in the Howling Hills.[2]

The Jogos Nhai carried out constant attacks upon N'Ghai, reducing the once proud kingdom to a single city, Nefer, and its hinterlands.[2]

Prior to the Dry Times, the Jogos Nhai were also involved in a bloody border war with the Patrimony of Hyrkoon that saw the zorse-riders poisoning rivers and wells, burning down towns and cities, and carrying off thousand Hyyrkoon into slavery. The Hyrkoon, for their part, sacrificed tens of thousands of Jogos Nhai to their dark gods. Thus, the enmity between the zorse-riders and the warrior women of the Bone Mountains runs deep into the present, and over the centuries dozens of jhattars have led armies up the Steel Road and broken against the walls of Kayakayanaya. Nevertheless, the moonsingers sing of the glorious day when the Jogos Nhai will prevail over the remnants of Hyrkoon and spill over the mountains to claim the fertile lands beyond.[2]

War with the Golden Empire

Even the Golden Empire of Yi Ti have been target of the Jogos Nhai depredations. Raids into the empire are a way of life for the zorse-riders, and a source of the gold and gems that decor the arms and necks of moonsingers and jhats as well as of the slaves that serve them and tend their herds. Over the past two thousand years, YiTish cities, towns, farms, and fields beyond count have been reduced to ruins and ashes. Many imperial generals and three God-Emperors have led armies to bring the nomads to heel but have seldom ended well and soon the raids began anew, even when jhats were compelled to vow eternal fealty to the God-Emperor and foreswear raiding forever.[2]

During his long reign, forty-second scarlet emperor Lo Han led three such invasions of the plains, yet by the time of his death the Jogos Nhai carried out bolder and more rapacious raids than when he began his reign. His successor, Lo Bu determined to end the threat of the nomads for all time, assembled a mighty host, said to be three hundred thousand strong, and crossed the borders of the empire with slaughter as his only purpose. Tributes, hostages, oaths of fealty, or offerings of peace failed to sway him and his vast army swept the plains, leaving behind a burning wasteland.[2]

When the nomads resorted to their traditional tactic of melting away at the approach of the army, Lo Bu divided his host into thirteen smaller armies and sent them forth in all directions to hunt down the zorse-riders. History tells a million Jogos Nhai died at their hands.[2]

The rival clans of Jogos Nhai unified under jhattar Zhea, a woman in man's mail, who, in the period of two years isolated each of Lo Bu's thirteen armies, slew their scouts and foragers, starved them, denied them water, led them into wastelands and traps, thus destroying each army one by one. Finally, her riders fell on Lo Bu's own host and carried out a slaughter to terrible that every stream for twenty leagues around was choked in blood. Among the slain was Lo Bu himself, whose skull was stripped of flesh and dipped in gold, becoming Zhea's drinking cup. Ever since, every jhattar of the Jogos Nhai has drunk fermented zorse milk from the gilded skull of the Boy Too Bold By Half, as Lo Bu is remembered.[2]

In the Eastern Market of Vaes Dothrak Daenerys Targaryen espies the striped black and white horses of the Jogos Nhai.[5]

In Qarth a pair of Jogos Nhai present Daenerys one of their striped zorses, as a token to the Mother of Dragons.[3]

Jogos Nhai fighters are among those who come to Meereen to battle in Daznak's Pit.[6]