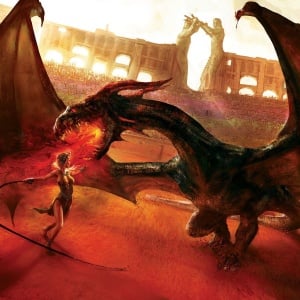 The Great Pit of Daznak,[1] commonly known as Daznak's Pit,[2][3] is the biggest and most extravagant of the fighting pits of Meereen. 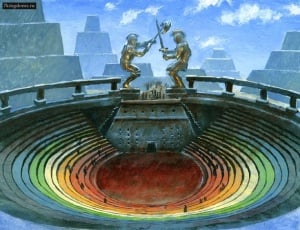 The pit is made of multicolored benches. FFG ©

At the pit's entrance are the Gates of Fate,[2] where the names of all gladiators who have died in the arena are engraved.[4] The circular brick arena has descending tiers of benches, each in a different color. The colors are: 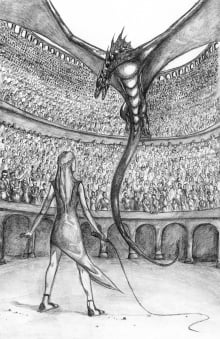 After the siege of Meereen, Daenerys Targaryen has 163 of the Great Masters impaled on spikes in Daznak's Pit in retaliation for the 163 slave children the masters killed to spite her.[5][2]

In celebration of the marriage between Daenerys and Hizdahr zo Loraq - who had bought all fighting pits in the city after it was conquered - and the peace between Yunkai and Meereen, the fighting pit is reopened. Several fights and spectacles take place but the noise and smell of blood draws Drogon to the pit, where he causes death and chaos and leaves with Daenerys on his back.[2]

After Viserion and Rhaegal are accidentally unleashed upon the city, the ruling council of Meereen herd 1,000 sheep into the pit to feed them and keep them sated. The dragons prove to have a taste for mutton, returning to the pit whenever they grow hungry.[6]

And I saw that dragon ripping off arms and legs, tearing men in half, burning them down to ash and bones. People started running, trying to get out of that pit, but I come to see a show, and by all of gods of Ghis, I saw one. I was up in the purple, so I didn't think the dragon was like to trouble me.[7]

—old slave in a rusted iron collar, to Tyrion Lannister