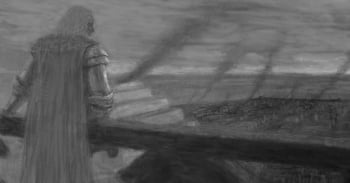 Ser Barristan looks at a smouldering Meereen - by Marc Fishman © 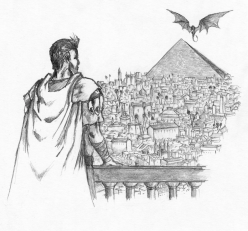 It is raining heavily in Meereen, for which Barristan Selmy is grateful; otherwise the fires caused during Viserion and Rhaegal's rampage might have consumed the entire city. There is no sign of the two dragons: they do not like the rain any more than men. Quentyn Martell is dead; it took three days for him to die. Out of respect for the prince, Ser Barristan had him placed in the queen's bed, the same one he crossed half the world to reach. Missandei is the only one he could get to help tend Quentyn, for none of the cupbearers were willing and the Blue Graces never responded to his summons; he suspects the pale mare has carried them off. Missandei asks what is to be done with Quentyn's body and Barristan replies that they will find a way to send him back to Dorne, though he is unsure how.

He advises Missandei to get some sleep and she urges him to do the same as she has noted that he doesn't sleep very much. Barristan privately thinks it is not just needing less sleep than a younger man, as Grand Maester Pycelle once told him, but having reached the age where he fears to close his eyes in case he never opens them again; Barristan does not consider dying in his sleep a death worthy of a knight of the Kingsguard. For a brief moment, he wonders if Daenerys is dead, but then dismisses the thought, though he notes that each time it becomes harder to convince himself his queen is still alive.

At dawn, Skahaz mo Kandaq comes to speak with him; Skahaz is already aware that Quentyn is dead, and he informs Barristan that the Green Grace, who Barristan sent to treat with the Yunkai'i to make them release the hostages, has not returned to the city. In addition, while the city is secure, an angry mob is gathered outside the pyramid demanding Hizdahr's release and that both dragons be destroyed, and since his arrest, the Sons of the Harpy have resumed their nightly murders with a vengeance; Barristan is shocked to learn they have killed twenty nine in the night, in contrast to nine the previous night and three the night before. However, despite Skahaz's insistence, Barristan still refuses to kill the hostages in retaliation.

The Shavepate tells Barristan (who is now the Queen's Hand, as head of a council ruling the city) that the council is waiting for him. Barristan does not want the position, but in the absence of Daenerys, he doesn't trust any of the others to rule. Grey Worm and the captains of the Stalwart Shields, Mother's Men and Free Brothers, along with Strong Belwas are present. Barristan informs them of Quentyn's death; most of the council express contempt for the prince's actions and many want his companions, who are at present imprisoned, executed for unleashing the dragons on the city. The fighting pits are to remain closed, for fear that the noise and smell of blood will attract the dragons, though Marselen suggests reopening the pits in the hope it lures Drogon back, and Daenerys with him. For the time being, the pits are packed full of livestock, from which the dragons are feeding regularly, and thus far, there has been no further evidence of either Viserion or Rhaegal eating people.

The council are convinced that the Yunkai'i are never going to accept any terms beside the killing of both dragons for the return of the hostages. When asked what he will do when his terms are refused, Barristan replies "Fire and Blood". They quickly grasp his meaning; he intends to do battle with the Yunkish army. A lengthy discussion regarding the battle plan follows, particularly regarding the deployment of troops, targets to attack, how best to use the Unsullied and other such concerns; however, all agree that if they can destroy the slavers, the sellsword companies will abandon their paymasters, and the dragons may make their presence known in the fight, though Barristan cannot say if they will help or just kill indiscriminately, though he does note that if they come, it will help break Yunkish morale.

When the council adjourns, Barristan goes to the cell where the two Dornishmen are being held and informs them of Prince Quentyn's death. Gerris Drinkwater angrily blames Daenerys for it, causing a fierce argument between him and Barristan, who bluntly dismisses Gerris's claims Quentyn came for love and asserts they came because Quentyn's father wanted the backing of House Targaryen before daring to defy the Iron Throne, but Archibald Yronwood angrily tells Gerris to shut up before more can be said. Barristan then makes an arrangement with the two Dornishmen; in exchange for a ship back to Dorne and Quentyn's bones to return to his father, Barristan wants them to go back to the Windblown company and tell the Tattered Prince that they will give him what he wants (namely Pentos) if he can free and protect the hostages during the attack.

The Green Grace returns, telling Barristan that the Yunkai'i have refused his offer, and that the only price they will accept is the death of the dragons. As they speak, the Shavepate runs in and tells them that the six trebuchets have begun flinging not rocks, but corpses into Meereen.