From A Wiki of Ice and Fire
Jump to: navigation, search
For the ruined pyramid in Old Ghis, see Great Pyramid of Ghis 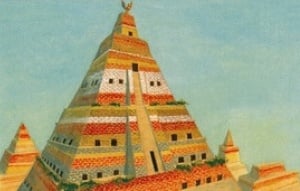 The Great Pyramid of Meereen is a massive structure that serves as the administrative center of Meereen. It is 800 feet tall (roughly 241 meters),[1][2] from its huge square base to the lofty apex.[3] A huge bronze harpy once stood at the apex.[1] 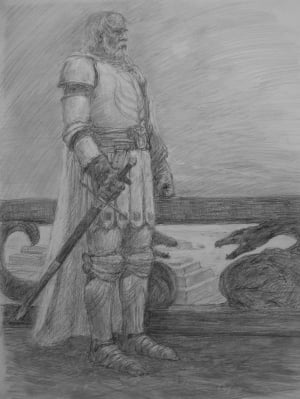 The foundations of the pyramid are massive and thick, supporting the weight of the huge structure overhead. The interior walls are three times thicker than any castle's curtain walls.[6] The servant's steps are the quickest way up and down the pyramid. These narrow, steep, and straight stairs are hidden within the thick brick walls.[7] The walls in the heart of the pyramid are eight feet thick.[4] The outer walls are thirty feet thick (9.14 meters); they muffle the tumult of the streets and keep the heat outside. Consequently, it is cool and dim within.[7][8]

The pyramid's main doors are closed and barred at sunset, opening only at first light the next day.[9][6] 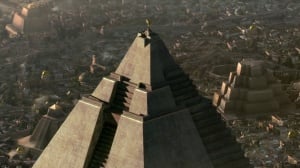 The Great Pyramid from above in Game of Thrones

The Great Pyramid boasts three-and-thirty levels, a number sacred to the Gods of Ghis.[4] On the ground level stables, stalls, and storerooms are located.[7] The stables in the western walls hold horses, mules, and donkeys, while the stables in the eastern walls hold elephants.[8] On the second level, the armory is located,[4] as are the chambers occupied by Reznak mo Reznak during the reign of Queen Daenerys Targaryen.[9] A training hall is located on the third level.[9] During Daenerys's absence following the events in Daznak's Pit, her husband and consort, King Hizdahr zo Loraq takes chambers in the heart of the pyramid, on the sixteenth and seventeenth levels.[4] During his stay in Meereen, Prince Quentyn Martell is given rooms on the thirtieth floor, two levels below the audience hall, which is located on the thirty-second level.[10] The private chambers of Queen Daenerys Targaryen are in the apex of the pyramid, on the thirty-third floor.[11][5]

Underneath the pyramid are vaults with cisterns, dungeons, and torture chambers.[7]

Daenerys Targaryen's keeps her private chambers (or queen's apartments) in the lofty apex of the pyramid on the highest step. Her chambers are surrounded by greenery and fragrant pools.[11] There are low brick parapets.

The queen’s splendorous audience chamber (or hall) is one level below her apartments, [5] down a broad marble stair.[3] It is an echoing, high-ceilinged room with tiles and walls of purple marble. Tall candles burn amongst the purple marble pillars[12], Unsullied stand with their backs to the pillars. [3] Daenerys Targaryen sits upon a plain ebony bench that she has made her throne, having broken up the previous throne of gilded wood carved in the shape of a harpy.[5]

Massive brick walls surround a suite of rooms buried in the very heart of the pyramid on the sixteenth and seventeenth levels. [9] [4] Hizdahr zo Loraq and the cupbearers of Daenerys Targaryen take up residence here during Daenerys' absence. [9] The king’s chambers are dark and windowless, surrounded on all sides by brick walls 8 feet thick (2, 44 meters). Great beams of black oak support the high ceilings.[4]

Located at ground level the base of the pyramid is a hushed place, full of dust and shadows. Within the ground level walls, sounds echo off arches of many coloured brick, and amongst the stables, stalls, and storerooms. [7] Horses - including Daenerys' mare the Silver) - mules and donkeys are stabled in the western walls, elephants in the eastern. Currently there are only 3 elephants stabled within the Pyramid. [8] [9] Daenerys’s wedding procession formed up inside the gates.

The pit of the Great Pyramid is 40 feet deep (12.19 meters) and large enough to hold 500 men. [7] Until Daenerys Targaryen's arrival the Great Masters used the pit in the Great Pyramid as a prison. The pit becomes a makeshift dragon pit when the queen’s dragons Viserion and Rhaegal are enclosed and chained up inside.

There are dungeons and torture chambers in proximity to the dragon pit. [6] Archibald Yronwood and Gerris Drinkwater were confined there due to their role in the escape of the dragons. Other members of the Windblown, feigned deserters, are also imprisoned in the dungeons. 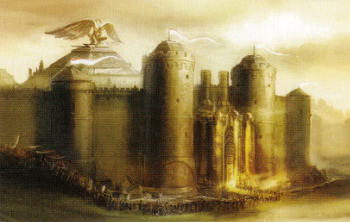 At the gates of Meereen, the enormous harpy is visible atop the Great Pyramid. © FFG

When Daenerys Targaryen arrives at Meereen, she can see the top of the Great Pyramid from outside the city's walls. The sellsword Daario Naharis, upon seeing the great bronze harpy on top, declares that the harpy is a craven thing.[1]

After Meereen is conquered, Daenerys orders the huge bronze harpy atop the Great Pyramid to be taken down. She takes the pyramid as her own seat.[5]

After the death of Hazzea,[3] Daenerys orders her three dragons captured. Viserion and Rhaegal are succesfully caught, and locked within a pit underneath the pyramid.[7]

As befits his status as Daenerys's only Queensguard knight, Ser Barristan Selmy is given rooms near Daenerys's chambers at the apex of the pyramid. Subsequently, he makes the climb up and down the Great Pyramid five or six times a day on the queen's business, which leaves him with pain in his knees and back. Ser Barristan feels his age when he climbs and fears that one day climbing the stairs will prove beyond his powers.[9]

Due to the thickness of the walls Viserion is able to carve a hole in the walls of the dragon pit, which serve as his own personal dragon's lair.[6]

Ser Barristan Selmy constructs a beacon at the pyramid's apex, there where the harpy once stood. The beacon consists of dry wood, soaked with oil, and is covered to keep the rain off. He intends to light the beacon when the time to attack the besiegers arrives. The flames will be the signals for the forces of Meereen to pour out of the city gates and attack their besiegers.[13]

Up here in her garden Dany sometimes felt like a god, living atop the highest mountain in the world. Do all gods feel so lonely? [5]

—Queen Daenerys Targaryen, in contemplation, atop the Great Pyramid