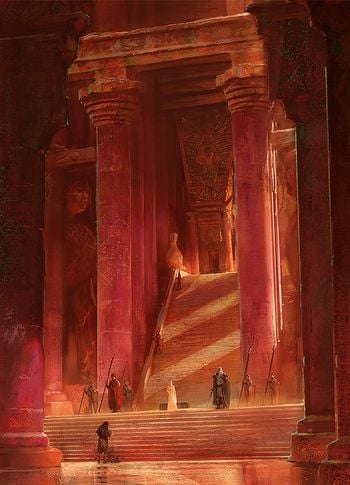 The audience chamber in the Great Pyramid - by Marc Simonetti ©

The audience chamber is located in the Great Pyramid, one level below Queen Daenerys Targaryen apartments. It is where she receives her subjects and visitors.

Queen Daenerys Targaryen's splendorous audience chamber (or hall) is one level below her apartments,[1] down a broad marble stair.[2] It is a chilly, echoing, high-ceilinged room with tiles and walls of purple marble. Tall candles burn amongst the purple marble pillars[3], Unsullied stand with their backs to the pillars.[2] Daenerys sits upon a plain ebony bench that she has made her throne.[1][2]

The previous use of the room is unrecorded. However, a throne stood there prior to her occupation of the Pyramid. The throne was a fantastic thing of carved and gilded wood, all in the shape of a savage harpy. Daenerys refused to use a "harpy's lap" as a throne and had the old throne destroyed. Its remains were used for firewood. The ebon bench was her own choice, though she noted the Meereeneese population considered the bench unworthy for a queen. [1] Daenerys finds herself spending long hours on the bench, listening to various petitioners and official representatives.

The audience chamber also has its own terrace. The lower terrace and its garden were used by Daenerys and Hizdahr to entertain the representatives from Yunkai to celebrate the peace. The garden includes lemon trees and night-blooming flowers.[4]

When Daenerys goes missing on Drogon, her consort and co-ruler Hizdahr zo Loraq takes over the audience chamber replacing her ebon bench with two imposing thrones of gilded wood. Their tall backs are carved in the shape of dragons. He chose the right-hand throne for himself, leaving the vacant left-hand throne for Daenerys Targaryen in case she returns.[5] Ser Barristan Selmy thinks of the new throne as the "dragon throne".[5]

After Hizdahr zo Loraq assumed control in Daenerys Targaryen's absence Barristan attended a court session in the Great Pyramid’s audience chamber. While he was observing the people in the crowded hall he spied the Dornish Princeling and his two companions in the rear of the hall. He thinks to himself that they should not have come and that Martell does not realise the danger he is in.[5]

Ser Barristan Selmy considers the Dornishmen for a little while. He then notes Hizdahr zo Loraq frowning at them and whispering in the ear of Marghaz zo Loraq. He does not like that frown. He reminds himself that he swore no oath to Dorne, but then he thinks of his Sworn Brother, Prince Lewyn Martell, back in the day when bonds between the Kingsguard still went deep. He says to himself that he could not help Prince Lewyn on the Trident - but he can help his nephew now. He realises that Quentyn’s continued presence is a provocation for Daenerys’s husband Hizdahr.[5] 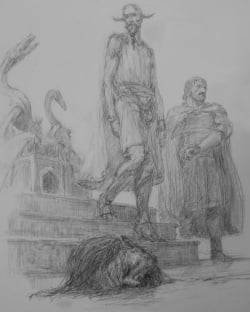 After Bloodbeard delivers Groleo’s head, the ensuing uproar and Hizdahr's withdrawal from the hall Ser Barristan sees the Dornishmen lingering in the hall. He takes the decision to beg word with Quentyn. He warns him to leave the city of Meereen and return to Dorne and that he can provide them with enough coin for passage back to Dorne so that the Prince can avoid the ensuing bloodbath that Ser Barristan Selmy knows is coming.[5] Quentyn does not take his advice, though later on Gerris Drinkwater indicates to Quentyn he is in favor of listening to Ser Barristan Selmy's warning, telling Quentyn:

When Barristan the Bold tells you to run, a wise man laces up his boots. [6]

Ser Barristan eventually deposes Hizdahr in a coup d'etat and is proclaimed Queen's Hand, meaning that he is ruling in the name of the missing Daenerys. He decides to keep both the ebony bench and the dragon thrones out of the hall. He replaces them with his own new seat: a large round table. The table is placed in the centre of the wall, surrounded by tall chairs. Ser Barristan Selmy intends for the men seated at the table, the ruling council of Meereen, to discuss as peers. [7] He refuses to hold court or accept petitioners in the hall until the return of Queen Daenerys Targaryen.[7]