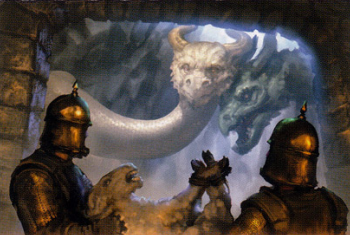 The Unsullied go to feed Viserion and Rhaegal a sheep in the pit. © FFG 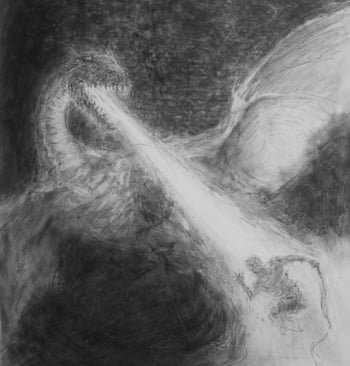 The pit becomes a makeshift dragon pit when the queen’s dragons Viserion and Rhaegal are enclosed and chained up inside. To get to the dragon pit you have to pass beneath 3 massive arches, go down a torch-lit ramp into the vaults beneath the pyramid, past cisterns, dungeons, and torture chambers (where slaves had been scourged and skinned and burned with red-hot irons). Finally you arrive at an entrance with a pair of huge, forbidding iron doors with rusted hinges, closed with a length of chain whose link is as thick around as a man’s arm. The doors were initially guarded by Unsullied, and later by Brazen Beasts.[1][2]

Daenerys Targaryen’s dragons Rhaegal and Viserion were confined and chained inside the pit of the Great Pyramid. The links of the dragon’s chains were as large as a man's bound fist. Both dragons were chained to the wall and floor.[1][2]

After a while Viserion was able to snap one of his chains.[3] He then melted his other chains using his dragonfire. During wedding feast celebrations Daenerys invited Quentyn Martell to see her dragons. When they arrive at the pit they are greeted with the sight of Viserion who has shattered one chain and melted the others. He is clinging to the roof of the pit, like some huge white bat. His claws dig deep into the burnt and crumbling bricks. Broken chains clank and clatter about his legs. Viserion is later able to dig himself a dragon lair in the pyramid’s thick wall.[2]

When they espy Rhaegal he is still chained and gnawing on the carcass of a bull.[4] Daenerys lies and tells Quentyn that Drogon is hunting. Rhaegal roars at the sound of her voice and Viserion replies.[4]

Sometime thereafter Rhaegal manages to also loose himself within the pit. With both dragons unchained the Unsullied inform Daenerys that once the iron doors glowed red-hot and no one dared touch them for a day.[3]

When attempting to steal a dragon Quentyn Martell notes that the iron doors have become dinted by the dragons trying to get out - the thick iron is cracked and splitting in three places and the upper corner of the left hand door looks partially melted.[2]

Quentyn sees that there is still a thick iron collar about Rhaegal's neck chain, with three feet of broken chain dangling from the collar. On the floor are shattered, twisted, and partly melted chains.[2] He looks for Viserion and sees that he has dug himself a hole in the Great Pyramid’s interior walls, a hole big enough to sleep in. A broken chain dangles from his neck.[2]

Quentyn’s plan to steal the dragons goes awry and he dies from burns caused by Rhaegal's dragon flame. With the iron doors left open by Quentyn and his cohorts the dragons escaped and were loosed upon the city.[5]