From A Wiki of Ice and Fire
Jump to: navigation, search
Not to be confused with the second siege of Meereen, taking place in 300 AC.

The siege of Meereen occurs in 299 AC when Daenerys Targaryen marches on Meereen, the last and the largest of the great Slaver Cities of Slaver's Bay.

The Meereenese, warned by the fall of Astapor and the battle near Yunkai, do not allow contact to be made with Daenerys Targaryen, retreating behind the formidable defense of Meereen. They strip their land, leaving Daenerys with scorched fields and poisoned wells, and they nail a disemboweled slave child up on every milepost along the coastal road from Yunkai, with an outstretched arm point toward Meereen as a message to Daenerys.[1] Daenerys, followed by twenty thousand soldiers and sixty thousand refugees from Astapor and Yunkai, is starved of supplies and cannot afford a prolonged siege.[1] Mero, the former leader of the Second Sons, is killed by Arstan Whitebeard.

A Meereenese champion, Oznak zo Pahl, emerges to challenge Daenerys's champion in single battle, but he is slain by Daenerys's eunuch bodyguard Strong Belwas, a former pit fighter of Meereen.[1]

Daenerys commands her fleet to be dismantled, to construct battering rams, mantlets, turtles, catapults, and ladders.[2]

The fighting is bitter and bloody for most of a day and well into the night. Daenerys sends rams, protected by great wooden turtles covered with horsehides, to batter the city gates, whilst her archers fire flights of flaming arrows over the walls and her forces storm the walls.[2]

At nightfall Daenerys sends a diversion force of two hundred men to set fire to the hulks in the harbor, while allowing Ser Jorah Mormont, Ser Barristan Selmy, Strong Belwas, and twenty others to infiltrate the city sewers under the cover of darkness. Once they find their way into the city, they go to the nearest fighting pit and release the slaves. Within an hour, half the fighting slaves in Meereen have been released, and soon after a ram breaks through the eastern gate and the defenders break. Daenerys wants to lead the charge through the gate herself, but her captains unanimously counsel against this. Soon the Unsullied crush the last resistance.[2] 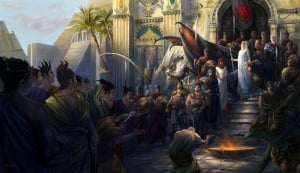 The Meereenese surrender to Daenerys Targaryen, by Stephen Najarian ©

In contrast to her previous Ghiscari conquests, Daenerys chooses to remain in Meereen, installing herself as queen with the Great Pyramid as her seat. This is because at this time, she receives word that her ruling council in Astapor has been overthrown by Cleon, a tyrannical butcher, resulting in much suffering. Not wanting to let this happen to Meereen, she decides to stay.[2] Her Unsullied finally restore order, but the sack leaves a plague of problems in its wake.[3]