Astapor
Slaver's Bay and the location of Astapor

Astapor, dubbed the Red City,[1] is the southernmost of the Slaver Cities on Slaver's Bay. The city is renowned for their training of the Unsullied, eunuch slave soldiers.

The Astapori emblem is a variation on the harpy of Old Ghis: a woman's torso, a bat's wings instead of arms, an eagle's legs, and a scorpion's tail. In its talons hangs a chain with open manacles at either end.[2]

Astapor is at the mouth of a meandering stream that the Astapori call the Worm, which flows in from the east. To the south are the Ghiscari hills, with the ruins of Old Ghis. West of Astapor, beyond the hills, is the Isle of Cedars, with the cities Ghozai and Velos, on the Gulf of Grief.[3][4]

Astapor is the southernmost of the slaver cities on Slaver's Bay.[3][5] Yunkai is a hundred leagues to the north, by the old Ghiscari coastal road, and Meereen is fifty more. Well-mounted travellers, riding hard, can reach Yunkai from Astapor in six days.[1] 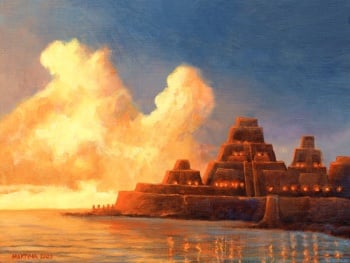 Astapor is a port-city on Slaver's Bay.[6] An old crumbling statue portraying the Astapori harpy is atop the harbor gate. The bay shore is dominated by great stepped brick pyramids, the largest of which is four hundred feet high. All manner of trees, vines and flowers grow on the terraces of the pyramids. Fighting pits are within the city walls. Astapor is all built with red bricks. The streets, the plazas, the stepped pyramids, the deep-dug fighting pits and the rings of descending seats within, the fountains, the gloomy wine caves, and the city walls have all been constructed with the same kind of red brick.[2] An old rhyme says "Bricks and blood built Astapor, and bricks and blood her people." This rhyme refers to the red-bricked walls of the city taking their color from the blood of the slaves who made them.[7][2] The red bricks are old and crumbling, causing red dust to be all over the city.[2] The city's walls are old and decaying, and its watch towers are unmanned.[2]

The Plaza of Pride is an open market where the slavers take their customers to view their purchases. In the centre of the plaza is a red brick fountain with a hammered bronze version of the Astapori harpy standing in its centre.[2] In the Plaza of Punishment, inside the main gate of Astapor, new slaves are brought into the city. There they go past rebellious slaves who have been punished or executed.[8]

In the fighting pits, dug deep and surrounded by descending rings of seats, all manner of entertainments are held. These include putting children up against animals like bulls and bears. The pits are named after their owners; Two identified pits in Astapor are Douquor's Pit and Jothiel's Pit.[2]

Astapor is an old city, but is not as populous as it once was. Lys, Pentos, and Qarth are more populous.[2] The Astapori are of mixed ethnic origins, and speak High Valyrian with a growl of the old Ghiscari tongue,[2] similar to the dialect spoken in Yunkai.[9] The Ghiscari gods who were worshiped when the Old Empire ruled are now also gone from memory.[2] However, the Astapori still use Ghiscari glyphs.[2]

Descending from the Ghiscari of old, most Astapori have amber skins, broad noses, dark eyes, and black or dark red hair, or a mixture of red and black hair which is distinctive to the ancient Ghiscari.[2][8] Men might oil their hair and beards, while women might wear accessories in their hair (e.g., ivory combs).[8] They dredge themselves in sweet perfumes.[8] Freeborn men and women wear tokars. The fringe on the tokar signifies a person's status.[8] To keep the red dust of the city's bricks, which stings worse than sand, out of their eyes, Astapori women veil their faces.[2].

Mounted Astapori guards wear tunics embroidered with linen, pleated linen skirts, sandals, and a cloak of yellow silk with copper disks sewn onto it.[8] They go about bareheaded, and oil and twist their hair into fantastic shapes (e.g., horn, wings, blades, and grasping hands), giving them a demonic look.[2][8] These highborn warriors are wealthy young men with old names and riches, who pretend they still rule the Old Empire of Ghis by dressing up as scourges. On feastdays, they fight mock wars in the fighting pits.[2]

Although the city is poorly defended and could be taken by a modest Dothraki khalasar, none try, as they know they would be facing the Unsullied. Also, the sons of the harpy give lavishly to the Dothraki khals, feasting them and giving them gifts, earning their friendship.[2]

Astapor is a slaver city, and has over a hundred slave traders.[8] Stories told about the flesh marts of the slave cities is dire and frightening.[10] The Astapori sell bed slaves, fieldhands, scribes, craftsmen, tutors, and soldiers. Only when dealing in the latter they function as allies.[8] The city takes a tenth of the price whenever a slave changes hands.[11] The greatest of the slave traders are those who sell Unsullied, the far-famed eunuch slave soldiers. Trained from a young age, these young soldiers are trained to be obedient, fearless warriors who feel no pain. The latter is accomplished by giving them wine of courage.[2] The Astapori claim that the Unsullied are the lockstep legions of the Old Empire come again, but unlike these ancient legions, the Unsullied are not free men.[2][7]

The Dothraki deliver many of the slaves trained and sold on the slave markets of Astapor and her sister cities.[7]

Astapor was a colony of the Old Empire of Ghis. According to an old saying, "Bricks and blood built Astapor, and bricks and blood her people", referring to the red bricks gaining their color from the blood of the slaves who had made them.[2][7] Astapor survived the destruction of Old Ghis at the hands of the Valyrian Freehold, but it was conquered by the Valyrians, who learned slavery from the conquered Ghiscari and used slaves to expand their empire.[12] As a result, the Ghiscari gods and the Ghiscari tongue are now largely forgotten.[2] After the Doom of Valyria and the fall of the Freehold, the Ghiscari of Slaver's Bay took control of the slave trade.[7]

The reputation of Astapor's Unsullied was solidified when the Three Thousand of Qohor fended off a Dothraki khalasar four centuries ago, during the Century of Blood.[10] Astapor's eunuch soldiers are often hired by the rulers of the Free Cities.[10] 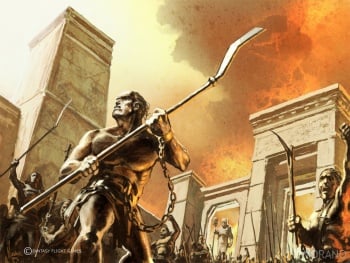 A crowd of recently freed slaves, rampaging through a wealthy neighborhood in Astapor - by Tomasz Jedruszek. © Fantasy Flight Games

Khal Pono's khalasar rides to the Slaver Cities to sell thousands of slaves.[13] The Sunblaze sails from Astapor to Qarth.[14]

As urged by Ser Jorah Mormont,[10] Daenerys Targaryen sails her ships to Astapor. There she purchases all the Unsullied within its walls, including those who have yet to complete their training. After the Unsullied have been transferred to her ownership, Daenerys has her soldiers sack the city, beginning her campaign in Slaver's Bay. She orders her Unsullied to strike the chains of all the slaves the Unsullied come across, and kill every man who wears a tokar.[8]

Upon Daenerys's departure from Astapor for Yunkai, she leaves a council of three men, a healer, a scholar and a priest to rule. They are deposed by Cleon, a former butcher, who leads the people to believe that the three intend to return the Good Masters to their positions of power. Naming himself king after he has the council executed, he has all the highborn boys seized to begin training new Unsullied. Each pyramid within Astapor is now an armed camp and the dead lie in the streets and the markets devoid of food and slaves to purchase.[11]

Lord Ghael brings news to Daenerys, now the queen in Meereen, that the Yunkai'i have attacked Astapor.[17] He requests the queen aid them with her Unsullied warriors, but she refuses and tells him that the freed city must defend itself.[17] Yunkai besieges Astapor and Cleon is killed by a rival who called himself Cleon the Second. Cleon the Second in turn is killed and a civil war erupts between Cleon the Second's murderer, King Cutthroat, and his concubine, Queen Whore.[18]

In an attempt to break the siege of Astapor, the city's new and inferior Unsullied march against the forces of Yunkai and its allies and sellswords but are defeated.[1] The bloody flux breaks out in the city and when people open the gates to escape, the Yunkai'i and their armies are able to get in. Queen Whore dies fighting and King Cutthroat is ripped apart by dogs. To prevent the dead and dying and the flux they carry from escaping, the Yunkai'i seal Astapor's gates.[19]

Quentyn Martell reflects that the sights he saw riding down the red brick streets of Astapor will haunt him forever and that the Red City is the closest thing to hell he ever hopes to know. Astapor's burning pyramids are larger than any castle he has ever seen.[1] Sellswords hunt the hills north of Astapor for those who escape the city.[19] Two Ghiscari legions land at Astapor in preparation for the second siege of Meereen.[19]

According to the peace treaty between Meereen and Yunkai, Astapor is to be restored in its old form as a slaver city.[20] Daenerys provides some food and shelter to Astapori refugees who reach Meereen, but her city's gates are sealed in an attempt prevent the bloody flux from spreading inside.[19][21] 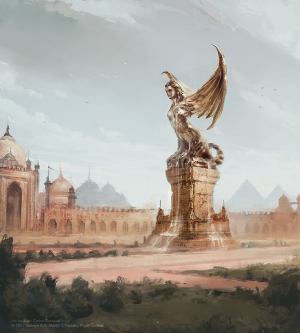 Astapor is most beautiful at dusk, Your Grace. The Good Masters light silk lanterns on every terrace, so all the pyramids glow with colored lights. Pleasure barges ply the Worm, playing soft music and calling at the little islands for food and wine and other delights.[2]

From here it looks almost beautiful, but it is dark below, in the streets and plazas and fighting pits. And it is darkest of all in the barracks , where some little boy is feeding scraps to the puppy they gave him when they took away his manhood.[2]

Even a modest khalasar could crack this Astapor like a nut and spill out the rotted meat inside.[2]

Daenerys: Many of my freedmen were slaves in Astapor. Perhaps some will wish to help defend your king. That is their choice, as free men. I gave Astapor its freedom. It is up to you to defend it.
Ghael: We are all dead, then. You gave us death, not freedom.[17]

Chapters which take place at Astapor