It is possible this was one of the city-states established by the Qaathi.[2] 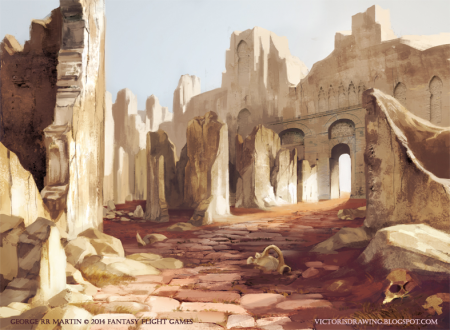 The city has large white walls encircling it, though they are cracked and crumbling. There are also wall towers. The city gates are broken. [1]

The city is a maze of narrow, crooked alleys. The buildings are built close together, their façades blank and chalky. All buildings are windowless. Some of the houses have long fallen into rubble, and other buildings seem damaged by fire. The remnants of a gutted palace stand before a windswept plaza. Devilgrass grows between the paving stones. [1]

A marble plinth stands at the crossroads between six alleys, but no statue stands on it. The Dothraki are presumed to have visited the city, taking its statues to Vaes Dothrak.[1]

The city has vegetation. There are grapevines, fig trees, peach trees, and other fruit trees in the abandoned gardens, hidden behind closed doors. There is enough grass to sustain a small herd of horses. Its wells contain pure and cold water. [1] There are also small animals in the city, most notably flies and red scorpions.[1]

There are remnants of the previous inhabitants in the city: the skulls of the unburied dead, bleached and broken. The twisty alleys contain old bronze coins, bits of purple glass, stone flagons with handles carved like snakes. [1]

To the south of the city, the barren red waste continues until one reaches a bleak ocean shore and the "poison water". This area contains only swirling sand, wind-scoured rocks, and plants with sharp thorns. The bones of an immense dragon can also be found there.[1]

To the southwest lie Vaes Orvik and Vaes Shirosi,[3] two abandoned cities of the Qaathi,[2] similar to Vaes Tolorro but smaller in size. One city is surrounded by a ring of skulls, mounted on rusted iron spears. The second city seems more inviting to explorers. While exploring it, Aggo finds an iron bracelet. The bracelet is set with an uncut fire opal. There are scrolls within the city, dry and crumbling, not suitable for transportation. The land of this entire area is barren and burnt.[1]

To the southeast lies an inhabited Qaathi city, Qarth.[1] 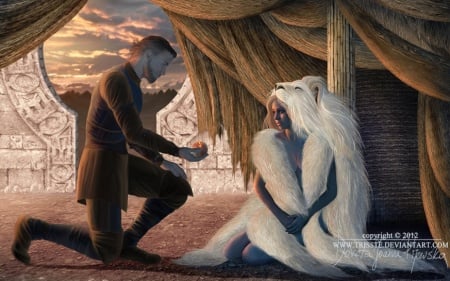 While wandering the red waste, Daenerys Targaryen's khalasar stumbles upon the abandoned city. They make camp within its walls to recover from their travels while sending out scouts to discover what is near.[1] Daenerys presumes that Vaes Tolorro and the cities of its vicinity were destroyed "in ancient days" by enemies who crossed the red waste.[1]

Daenerys briefly considers travelling back to Vaes Tolorro to settle with her people, but thinks the journey back would be too difficult.[5]

A city, Khaleesi. A city as pale as the moon and lovely as a maid.[1]

Irri: Ghosts. Terrible ghosts. We must not stay here, Khaleesi, this is their place.
Daenerys: I fear no ghosts.[1]