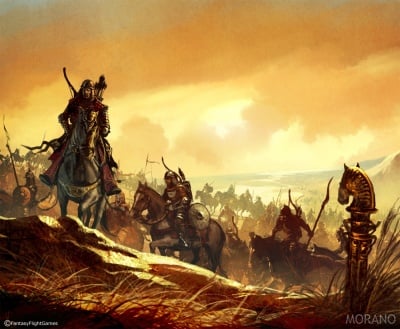 A khalasar is a nomadic horde of Dothraki led by a chief called a khal. The heir to a khalasar is the khal's son, the khalakka.

Khalasars come in various sizes; the more powerful and feared the khal, the larger his khalasar. Before the age of thirty Khal Drogo led an enormous khalasar forty thousand strong.

Khalasars are broken into groups, called khas, which are each led by one of the khal's captains, called kos. When a khal dies or becomes too weak to lead, a new khal may take control of the khalasar or the khas may break away and form new khalasars led by their former kos.

The Dothraki will not follow a child khalakka.[1] Instead, the kos will fight among themselves to take the place of the fallen khal and the khalakka will be killed so that he does not grow up to become a rival.[1]

Death rides with every khalasar. [2]

Fall upon one of these khalasars and destroy it, and you may find that the Dothraki are not so quick to cross the Rhoyne. [3]