Illyrio Mopatis is a wealthy magister from the Free City of Pentos. He is friends with Varys, the master of whisperers to the king on the Iron Throne. In the television adaptation Game of Thrones he is played by Roger Allam. 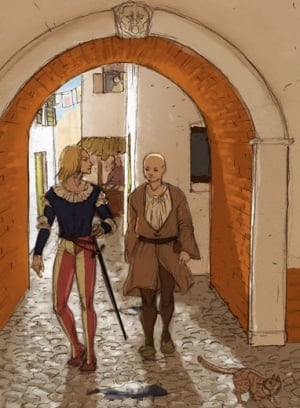 In his youth, Illyrio was a slender, tall young man. [1] Years later, after having gained significant wealth and power, Illyrio has grown morbidly obese.[2] He has pig's eyes and fat cheeks. He has a huge white belly and a pair of heavy breasts that sag like sacks of suet covered with coarse yellow hair. When he laughs his flesh bounces vigorously.[3] He has an oiled forked yellow beard,[2] which he tends to stroke in a manner considered remarkably obscene by Tyrion Lannister.[3] Although he uses heavy perfumes, Illyrio's flesh can still be smelled by bystanders.[2] He has crooked yellow teeth.[2] Despite his bulk, he can walk lightly,[4] a remnant of having been a bravo as a youth.

In his youth, however, Illyrio was a muscular and exceptionally handsome sellsword. A statue of his youthful self carved by Pytho Malanon graces the court in his manse. It depicts a naked boy, no older than sixteen, standing in the water of a marble pool, poised to duel with a bravo's blade shimmering like steel. The statue is lithe and handsome with straight blond hair brushing its shoulders.[3]

Although slavery is outlawed in Pentos according to its treaty with Braavos, Illyrio's servants are slaves in all but name. His favorite is a fair-haired, blue-eyed sixteen-year-old woman.[2]

As a young man, Illyrio was a poor bravo, living by his blade. After the young Varys arrived in Pentos they formed an unlikely friendship and worked together and became very rich. Illyrio grew very respectable and married the maiden daughter of a cousin of the Prince of Pentos[5] - only with the help of Varys did he reach a position where the daughter of a magister was willing to marry him.[6] After she died, he remarried at least once, to Serra, a Lysene pillow house worker. This infuriated the prince, who barred the palace to him forever after. Illyrio was happy with Serra until the Treasure, a Braavosi trading galley carrying the plague, anchored in Pentos. Through the rats the plague left the ship and killed two thousand in the city, among them Serra. Illyrio keeps a locket with Serra's picture and her hands as a reminder of his lost love.[5]

Even decades after Varys left to serve in Westeros the two still keep in close contact.[4][3][5]

Illyrio has kept an eye on the remaining Targaryens, Viserys and Daenerys, for years whilst they lived in exile in the Free Cities.[1] Eventually, he took them into his manse, keeping them under his protection.[2] He was smitten at first by the beauty of Daenerys and thought of eliminating Viserys and claiming her as a wife, but dismissed this idea soon as he believed the girl too timid and frightened and that coupling with her would give him no pleasure. He claims he protected Viserys and Daenerys on the grounds that Viserys promised to make him the master of coin upon his ascension to the Iron Throne.[5] 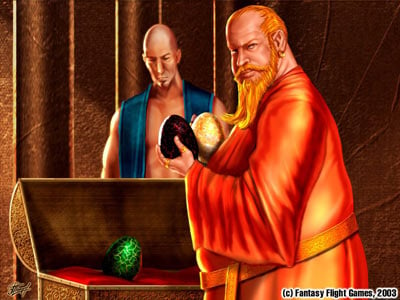 Illyrio with dragon eggs - by Amok ©

Apparently, Illyrio's interest in the remaining Targaryens is purely financial, expecting to receive great riches in gratitude once a Targaryen regains power. He also inflames Viserys's ambitions by telling him of Westerosi people awaiting the return of their rightful king, of men drinking toasts to his health and women sewing dragon banners in secret.[2]

Illyrio brokers the arranged marriage in Pentos between Daenerys Targaryen and Khal Drogo to use Drogo's powerful khalasar as an invasion force. He gifts Daenerys at her wedding with three petrified dragon eggs.[2][4]

While exploring the lower levels of the Red Keep, Arya Stark overhears Illyrio and Lord Varys scheming on behalf of Daenerys against King Robert I Baratheon, although she does not recognize them.[4]

Daenerys eventually hatches the dragon eggs after Drogo's death. Ironically, the dragons are worth more than anything Illyrio could hope to receive from Daenerys.[7]

Illyrio continues to look after Daenerys, sending her Strong Belwas and his squire, Arstan Whitebeard, along with three ships commanded by Groleo[8] to take her back to Pentos.[9]

Aboard the Balerion Ser Jorah Mormont and Daenerys discuss Illyrio. He counsels that she return to Pentos and Illyrio in her own time, and not alone. He advises her to use the valuable cargo of the Balerion, Vhagar and Meraxes to help purchase slaves. Dany tells him that the cargo belongs to Illyrio. He argues that if Illyrio would deny her then he is only Xaro Xhoan Daxos with four chins. Dany heeds his counsel and sails to Slaver's Bay where she can buy Unsullied.

One of Illyrio's ships, the Bountiful Harvest, is seized by Salladhor Saan, who has been named Lord of Blackwater Bay.[10] 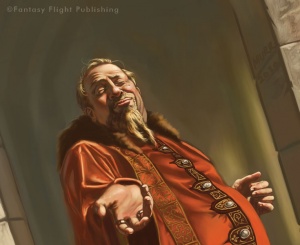 After Tyrion Lannister is convicted of treason in the poisoning of King Joffrey I Baratheon, Varys arranges to smuggle him out of King's Landing and puts him in Illyrio's care in Pentos. The magister takes Tyrion into his home and offers him a way to become Lord of Casterly Rock. He reveals the truth about Daenerys to Tyrion, who reluctantly agrees to travel to her. Illyrio also reveals that his interest in supporting the Targaryens is to become the master of coin of the Seven Kingdoms.[3][5]

Illyrio and Tyrion travel in a litter and eventually meet with some of Illyrio's other cohorts.[5] Illyrio greets Haldon and Rolly Duckfield and has Tyrion join them to continue the voyage to Volantis. Illyrio bids them a pleasant journey and returns to Pentos and his manse.[11] Griff says that Illyrio has paid Triarch Nyessos Vhassar of the Volantene elephants enough to own him eight times over.[12]

It is revealed that Illyrio, Jon Connington, and Myles Toyne of the Golden Company had agreed to support the claim of Aegon Targaryen to the Iron Throne,[13] and the surviving plotters now hope to marry Aegon to Daenerys.[14] Tristan Rivers reveals that Illyrio had told the Golden Company that Daenerys, described as a pliable young child queen, was on her way to Pentos with her newly-hatched dragons.[13] She has remained in Meereen, however.

Tyrion: Slaver's Bay is a long way from Pentos.
Illyrio: This is so, but the world is one great web, and a man dare not touch a single strand lest all the others tremble.[3]

You Westerosi are all the same. You sew some beast upon a scrap of silk, and suddenly you are all lions or dragons or eagles.[3]

Tyrion: Are you quite certain that Daenerys will make good her brother's promises?
Illyrio: She will, or she will not. I told you, my little friend, not all that a man does is done for gain. Believe as you wish, but even fat old fools like me have friends, and debts of affection to repay.[5]

Black or red, a dragon is still a dragon.[5]

Some pox-ridden Pentoshi cheesemonger had her brother and her walled up on his estate with pointy-hatted eunuchs all around them, and now he's handed them both over to the Dothraki. I should have had them both killed years ago, when it was easy to get to them.[15]

Daenerys: Illyrio protected us from the Usurper's knives, and he believed in my brother's cause."
Jorah: Illyrio believes in no cause but Illyrio. Gluttons are greedy men as a rule, and magisters are devious. Illyrio Mopatis is both.[16]

Daenerys: Magister Illyrio has protected me in the past. Strong Belwas says that he wept when he heard my brother was dead.
Jorah: Yes, but did he weep for Viserys, or for the plans he had made with him?[8]

Illyrio Mopatis. A whale with whiskers, I am telling you truly. These chairs were built to his measure, though he is seldom bestirring himself from Pentos to sit in them. A fat man always sits comfortably, I am thinking, for he takes his pillow with him wherever he goes.[10]

And any friend of Varys the Spider is someone I will trust just as far as I can throw him.[3]

Lemore: Illyrio could not have been expected to know that the girl would choose to remain at Slaver's Bay.
Jon: No more than he knew that the Beggar King would die young, or that Khal Drogo would follow him into the grave. Very little of what the fat man has anticipated has come to pass. I have danced to the fat man's pipes for years, Lemore.[13]