Salladhor Saan, known as Salla to his friends,[1] is a notorious Lysene pirate, sellsail, smuggler, trader, and banker. He styles himself the Prince of the Narrow Sea[4] and is a descendant of the Saan family. In the television adaptation Game of Thrones, Salladhor is portrayed as a Lysene citizen of Summer Islander descent and is played by Lucian Msamati.[5]

Salladhor is slim and friendly,[4] with a streak of black humor like that of Mad Prendos.[6] The fair hair of the spry old man have gone white with age.[2] According to his friend Ser Davos Seaworth, Salladhor only has concubines,[4] but the old pirate refers to having both wives and concubines.[3]

One outfit includes flashing cloth-of-silver, with dagged sleeves pooling on the floor. His buttons are monkeys of carved jade and atop his wispy white curls is a jaunty green cap decorated with a fan of peacock feathers.[4] Another outfit includes a wine-colored tunic and high boots of bleached white leather inlaid with silver scrollwork.[1]

Besides his galleas Valyrian, Salladhor commands a fleet of two dozen striped galleys.[7]

The Saan family have a long and distinguished history as pirate-lords stretching back at least three centuries to the reign of Aegon I Targaryen.[8] One of his relatives, Samarro Saan, was one of the infamous Band of Nine.[9][2]

Ser Davos Seaworth journeyed to Lys to recruit Salladhor for Stannis Baratheon.[4] Salla is one of the mercenaries pledged to Stannis while he plans to take the Iron Throne.[7] His galleas, the Valyrian, is spotted offshore of Dragonstone. Another of his ships, Bird of Thousand Colors, brings news from King's Landing. Salladhor tells Davos of the legend of Lightbringer.[4]

During the Battle of the Blackwater, Salladhor and his fleet stay in Blackwater Bay outside of the Blackwater Rush to keep watch for any hidden fleets that may sneak up from behind. Davos thinks this a waste of Salla's resources.[10] After Stannis's army is smashed by the combined Lannister and Tyrell force, Salladhor orders his ships to pick up the remnants along the shore, including Stannis[3] and Devan Seaworth.[1] 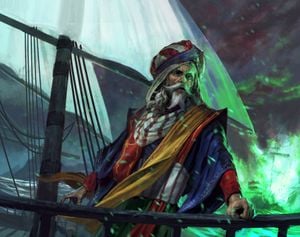 Salladhor during the Battle of the Blackwater, by Diego Gisbert Llorens © Fantasy Flight Games

Salladhor is made Lord of Blackwater Bay by Lord Alester Florent, who as Hand of the King has control of Stannis's king's seal after the Blackwater.[1] He sets his fleet to intercepting any trade ships crossing Blackwater Bay and taxing them on their goods.[1]

Salla's galley Shayala's Dance rescues Davos from Blackwater Bay. Salladhor counsels Davos upon his return to Dragonstone not to seek out Melisandre but is rebuffed.[1]

Alester attempts to have one of Salladhor's men transport a letter with terms for peace to Lord Tywin Lannister, but Alester is imprisoned when his plot is discovered.[11] Salladhor and Ser Axell Florent plot an attack on Claw Isle because Lord Ardrian Celtigar knelt to King Joffrey I Baratheon, but Davos dissuades Stannis from the plan.[12]

Salladhor informs Dragonstone of the Red Wedding.[3] One of Salla's ships, Mad Prendos, transports Edric Storm to Lys without the king's knowledge.[6][13]

With Stannis at Castle Black, Salladhor is left at Eastwatch-by-the-Sea.[15]

Queen Selyse Florent feasts Salladhor at Eastwatch.[16] His fleet of twenty-nine ships sets sail from Eastwatch for White Harbor to take Davos as an envoy from Stannis to Lord Wyman Manderly. However, when most of his fleet is destroyed by storms, Salladhor loses heart off the Three Sisters and decides to abandon Stannis, sick of waiting for payment from the king. He refuses to take Davos to White Harbor but does not throw him overboard as he threatened. Davos is set ashore on Sweetsister by rowboat.[14] Sallador then goes on to the Stepstones to engage in piracy.[14]

The men of Westeros are ever rushing. What good is this, I ask you? He who hurries through life hurries to his grave.[4]

Davos: How is it you come by a Pentoshi ship? Have you gone pirate again, my lord?
Salladhor: Vile calumny. Who has suffered more from pirates than Salladhor Saan? I ask only what is due me. Much gold is owed, oh yes, but I am not without reason, so in place of coin I have taken a handsome parchment, very crisp. It bears the name and seal of Lord Alester Florent, the Hand of the King. I am made Lord of Blackwater Bay, and no vessel may be crossing my lordly waters without my lordly leave, no. And when these outlaws are trying to steal past me in the night to avoid my lawful duties and customs, why, they are no better than smugglers, so I am well within my rights to seize them.[1]

Salladhor the Beggar, that's what your king has made me. Salladhor the Smashed. Where are my ships? And my gold, where is all the gold that I was promised? When, when? On the morrow, on the new moon, when the red comet comes again? He is promising me gold and gems, always promising, but this gold I have not seen. I have his word, he is saying, oh yes, his royal word, he writes it down. Can Salladhor Saan eat the king's word? Can he quench his thirst with parchments and waxy seals? Can he tumble promises into a feather bed and fuck them till they squeal?[14]

The Lyseni was a sleek, smiling man whose flamboyance was a byword on both sides of the narrow sea.[4]

When a pirate grows rich enough, they make him a prince.[4]

Salladhor Saan thinks only of gold! His head is full of dreams of the treasure he fancies lies under the Red Keep, so let us hear no more of Salladhor Saan. The day I need military counsel from a Lysene brigand is the day I put off my crown and take the black.[17]

You are a treacherous old rogue, Salladhor Saan, but a good friend all the same.[1]