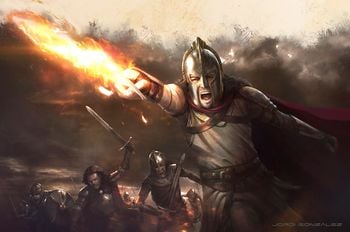 Hyrkoon the Hero, with Lightbringer in hand, leads the virtuous into battle, as depicted by Jordi Gonzales Escamilla in The World of Ice & Fire

Lightbringer, also called the Red Sword of Heroes,[1] is a magical sword associated with a heroic warrior most commonly named Azor Ahai.[2] Melisandre claims that the sword of Stannis Baratheon is Lightbringer.[1] 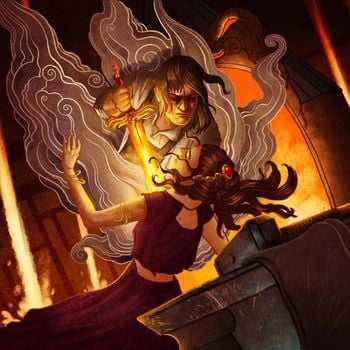 Azor Ahai thrusts a sword into the heart of his wife Nissa Nissa to create Lightbringer, by Tim Durning © FFG

Lightbringer is associated with a great warrior—most commonly called Azor Ahai, but also Hyrkoon the Hero, Yin Tar, Neferion, and Eldric Shadowchaser in other cultures—who led the virtuous in battle when darkness lay over the known world, possibly the Long Night recalled by Westerosi.[2]

According to the legend of Azor Ahai, he labored for thirty days and thirty nights to create a hero's sword. However, when he went to temper it in water, the sword broke. Azor Ahai was not one to give up easily, so he started over. The second time he took fifty days and fifty nights to make the sword, even better than the first. To temper it this time, he captured a lion and drove the sword into its heart, but once more the steel shattered. The third time, with a heavy heart, for he knew beforehand what he must do to finish the blade, he worked for a hundred days and nights until it was finished. This time, Azor Ahai called for his wife, Nissa Nissa, and asked her to bare her breast. He drove his sword into her breast, her soul combining with the steel of the sword, creating Lightbringer, while her cry of anguish and ecstasy left a crack across the face of the moon.[1]

According to the Jade Compendium by Colloquo Votar, Lightbringer was henceforth always as warm as Nissa Nissa had been, and that the blade burned fiery hot during battles.[3] Lightbringer was able to boil the blood of a monster when Azor Ahai thrust the sword through the belly of the beast. After steam poured from the beast's mouth and its eyes melted, its body burst into flame.[3] Followers of R'hllor believe that Azor Ahai used the red sword to end the darkness.[4]

It has been foretold in books from Asshai that when the stars bleed and the cold winds blow, Azor Ahai will be reborn as a warrior who draws the burning sword Lightbringer from a fire.[1] 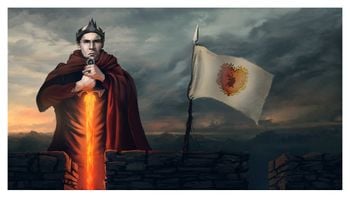 Melisandre, a red priestess, burns Dragonstone's wooden statues of the Seven in a pyre; her ruby glows during the ceremony. Melisandre proclaims that Stannis Baratheon is Azor Ahai come again, and she has Stannis withdraw a longsword which had been thrust into the breast of the Mother's statue. The cherry-red steel of the blade, which has a leather grip, is covered with jade-green flames. After Stannis thrusts the sword into the ground, Bryen Farring and Devan Seaworth cover the burnt and blackened sword with Stannis's cloak.[1] Salladhor Saan tells Ser Davos Seaworth that the sword is not actually Lightbringer, and the sellsail tells the Onion Knight about the legend of Azor Ahai.[1]

When Stannis meets with his younger brother, Renly Baratheon, near Storm's End, Catelyn Stark notices that his sword has a great square-cut ruby set in the hilt. Stannis draws Lightbringer after being mocked by Renly, and the longsword brightly shimmers red, yellow, and blazing white.[5] After Renly is assassinated by a shadow, one of the rumors about his death claims that Stannis killed his brother with a magic sword.[6] 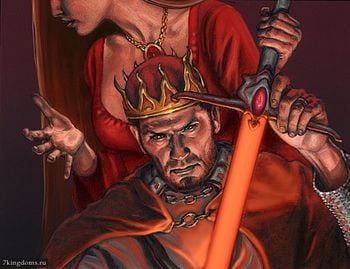 Because stories have spread about Stannis and his magic sword, Lord Tywin Lannister decides to give his grandson, King Joffrey I Baratheon, a Valyrian steel longsword made from Ice as a wedding gift.[8] Joffrey eventually names his blade Widow's Wail.[9]

Stannis touches Lightbringer to Davos's shoulder when appointing him as Hand of the King. Davos sees the longsword glowing orange, yellow, and red, and air shimmers around it. Davos does not notice heat, however.[10]

Melisandre tells Stannis she has had visions in her flames of Stannis wielding Lightbringer against the dark.[11] Stannis draws a glowing Lightbringer in anger after Davos has Edric Storm smuggled to safety from Dragonstone. Davos reads a letter from the Night's Watch,[12] however, and Stannis travels north with his remaining followers to save Castle Black from Mance Rayder.[13]

Following the battle beneath the Wall, Melisandre tells the officers of the Night's Watch that Stannis wields the red sword of heroes. Stannis draws Lightbringer upon Maester Aemon's request, and Samwell Tarly explains to the blind maester that the sword prettily glows without flame. Grenn compares the glowing Lightbringer to the sun.[14]

While sailing from Braavos to Oldtown, a fevered and dying Aemon tells Sam that the real Lightbringer both shone with light and radiated heat.[15]

Stannis angrily draws Lightbringer when Jon Snow, Lord Commander of the Night's Watch, refuses to give him more castles along the Wall.[16]

When Melisandre burns "Mance Rayder" and the Horn of Joramun, Stannis displays a brilliant Lightbringer before the free folk at Castle Black.

Stannis's possession of the enchanted blade is among the reasons why smallfolk continue to support him during the march on Winterfell.[17] Ramsay Bolton sends a letter to Jon in which he claims that he has defeated Stannis in battle and taken the magic sword.[18]

Instead of having Theon Greyjoy burned at the crofters' village, Asha Greyjoy advises Stannis to behead her brother with his sorcerous sword before a weirwood on a nearby islet.[19] 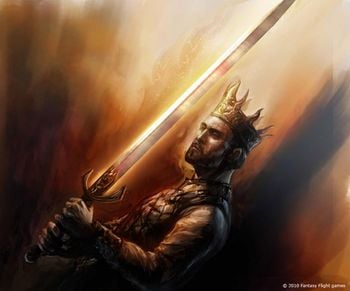 In ancient books of Asshai it is written that there will come a day after a long summer when the stars bleed and the cold breath of darkness falls heavy on the world. In this dread hour a warrior shall draw from the fire a burning sword. And that sword shall be Lightbringer, the Red Sword of Heroes, and he who clasps it shall be Azor Ahai come again, and the darkness shall flee before him. Azor Ahai, beloved of R'hllor! The Warrior of Light, the Son of Fire! Come forth, your sword awaits you! Come forth and take it into your hand![1]

Be glad that it is just a burnt sword that His Grace pulled from that fire. Too much light can hurt the eyes, my friend, and fire burns.[1]

Are you afraid I'll piss on your burning sword and put it out?[7]

Melisandre swears that she has seen me in her flames, facing the dark with Lightbringer raised on high. Lightbringer! It glimmers prettily, I'll grant you, but on the Blackwater this magic sword served me no better than any common steel. A dragon would have turned that battle.[11]

Samwell: It glows. As if it were on fire. There are no flames, but the steel is yellow and red and orange, all flashing and glimmering, like sunshine on water, but prettier. I wish you could see it, Maester.
Aemon: I see it now, Sam. A sword full of sunlight. So lovely to behold.[14]

Westeros has but one king. With this sword I defend my subjects and destroy those who menace them. Bend the knee, and I promise you food, land, and justice. Kneel and live. Or go and die. The choice is yours.[3]

—Stannis Baratheon to the free folk

Clydas: A sword that makes its own heat ...
Jon: ... would be a fine thing on the Wall. A pity that the sword that Stannis wields is cold. I'll be curious to see how his Lightbringer behaves in battle.[3]