The exiled Princess Daenerys Targaryen prepares to be presented to the Dothraki khal, Drogo, as her brother, King Viserys Targaryen, hopes to gain a Dothraki army by making such a marriage alliance.

For the past half year, the exiled claimant Viserys Targaryen and his thirteen-year-old sister, Princess Daenerys Targaryen, have been residing in the manse of Illyrio Mopatis, a magister of the Free City of Pentos. Viserys wishes to win back the Iron Throne of his father and is in need of an army, which he hopes to acquire by making a marriage alliance with a Dothraki khal who leads a large khalasar.

Viserys presents Daenerys with a gift from Magister Illyrio, a fine silk dress. Daenerys has to look like the princess she is, so Khal Drogo will ask for her hand in marriage. Although Daenerys is doubtful of Illyrio's motives, Viserys insists that the magister simply wants to earn his good graces. Afraid of angering her brother (which he calls "waking the dragon"), Daenerys keeps silent about her mistrust. Viserys warns Daenerys not to fail him, and twists one of her nipples to emphasize his threat. According to Viserys, when history of his reign is written, it will be said that his reign began that night. 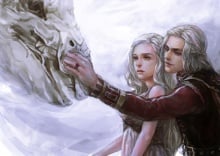 Daenerys and Viserys Targaryen, by aprilis420 ©

Viserys departs, leaving Daenerys alone with her thoughts. She dreads the feast she has to attend that evening, and her mind wanders to Westeros, the homeland she has never seen. She had been conceived shortly before her mother, Queen Rhaella Targaryen, fled King's Landing with Viserys, and born nine months later on Dragonstone. Yet she knows the stories Viserys has told her, the flight from King's Landing to Dragonstone; her eldest brother, Rhaegar Targaryen dying in battle against Robert Baratheon at the Trident; the Sack of King's Landing, the gruesome death of Prince Aegon Targaryen, and the murder of her father, King Aerys II Targaryen, in the throne room, committed by a knight of his own Kingsguard.

Nine months after the deaths of Daenerys's brother and father, her mother died giving birth to her (something for which Viserys has never forgiven her), during a summer storm which destroyed most of the Targaryen fleet which had been Dragonstone's last defense. When the garrison of Dragonstone was wiling to give Viserys and Daenerys over to Stannis Baratheon, who was on his way to take Dragonstone, Ser Willem Darry and four loyal men secretly took them to Braavos. There they lived in a big house with a red door. However, Willem died, leaving them without a guardian, and the servants stole what money was left. When Viserys and Daenerys were put out of the house not long after, they began to travel from city to city, never staying anywhere long, as Viserys feared the Usurper's assassins. Daenerys recalls how rich merchants, archons and magisters became less and less willing to host the Targaryens as the years went by, and how Viserys had been forced to sell their mother's crown. However, despite the lack of support, Viserys has become obsessed with recovering the Iron Throne. Daenerys knows that he is being called "the beggar king" behind his back, and wonders if people have given her a nickname too.

Illyrio's servants come to bathe Daenerys and prepare her for the feast given at Drogo's manse, where she is to meet and impress the khal so he will ask for her hand in marriage. The servants tell her how lucky she is to marry a man so rich that even his slaves wear golden collars. Once she is properly dressed, her brother returns with Magister Illyrio and commands her to stand up and turn around. Illyrio showers Daenerys with compliments while Viserys complains she is too skinny and too young. Illyrio reassures him that she is old enough for the khal, and he comments on her silver-gold hair and purple eyes, the hallmarks of old Valyrian nobility. When Viserys states that barbarians are said to have queer tastes such as boys and sheep, Illyrio warns him not to say these things to Khal Drogo, creating a flare of anger in Viserys's eyes. 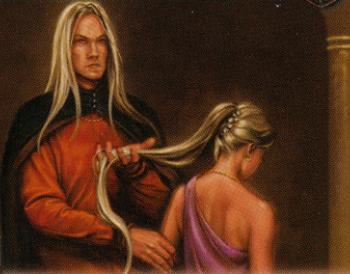 The three of them journey in Illyrio's litter to Drogo's manse in the pitch dark. Viserys states that ten thousand Dothraki "screamers" will be enough to overthrow the Usurper when combined with those in Westeros that are awaiting his return. He speculates on those who would join their cause: House Tyrell, House Redwyne, House Darry, House Greyjoy, and the Dornishmen. Illyrio assures Viserys that the people in the Seven Kingdoms secretly await his return, though Daenerys doubts him.

Illyrio says that Drogo's manse was a gift from the magisters of Pentos, to help win Drogo's friendship. They arrive at the mansion and are announced as King Viserys III and Princess Daenerys. Illyrio points out several prominent guests, including Ser Jorah Mormont, who had fled the Seven Kingdoms under sentence of death several years before, and has since spent much time among the Dothraki. Illyrio then points out Khal Drogo himself, who is as graceful as a panther, and younger than Daenerys had expected. Viserys notes his long braid, which means he has never been defeated in combat. Daenerys only notes his cold, hard face and is afraid of him. She asks to go home, provoking a rant from Viserys about how their home has been taken away from them. Daenerys only meant their rooms in Illyrio's estate, but none of the places they have stayed in have been Viserys's home. Viserys also assures Daenerys that he would let Drogo's whole khalasar, including their horses, rape her if it would win him back the Seven Kingdoms. He then tells her to stop crying, because Illyrio is leading Drogo over to meet them. Daenerys stops crying, stands up straight, and smiles.