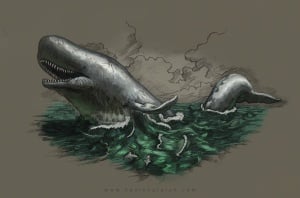 A leviathan is a type of enormous whale, usually grey in color.[1] They are described as the oldest and largest creatures living in the entire world, implying they surpass even dragons in size.[2]

Leviathans are found in the Shivering Sea and are known to gather and breed in Lorath Bay.[3] They also mate and birth at Leviathan Sound.[4]

According to ironborn legend, Nagga, the first sea dragon, was able to feed on krakens and leviathans.[5] A black leviathan is included in the sigil of House Volmark of the Iron Islands.[6] The longship Leviathan is part of the Iron Fleet.[7]

Ibbenese whalers hunt leviathans at Leviathan Sound from their strong ships.[8] The waters of the northern Sunset Sea are said to have leviathans as large as islands.[9]

In the Merman's Court, the great hall of the New Castle in White Harbor, there is a painting of a kraken and a grey leviathan locked in battle.[10]

Ser Eustace Hightower's Lady Meredith encountered a pod of leviathans and was damaged by a white bull while returning to Oldtown in 56 AC. The ship redirected for the Summer Isles, but would up in Sothoryos.[11]

Leo Tyrell insults Samwell Tarly of the Night's Watch by calling him a black-clad leviathan.[1]

Who shall be our king in Balon's place? Sing to me in the language of leviathan, that I may know his name.[12]

A fisherman may hook a grey leviathan, but it will drag him down to death unless he cuts it loose.[13]