Victarion Greyjoy is a member of House Greyjoy and is a younger brother of Balon Greyjoy, Lord of the Iron Islands. He is the Lord Captain of the Iron Fleet,[4] and his flagship is the Iron Victory.

Victarion is a large and powerful man, with a bull's broad chest and a boy's flat stomach. His hair is flecked with grey.[3] Theon Greyjoy considers his uncle to be an old man.[5]

Victarion is a capable commander and a fierce warrior in battle, but he has a calm demeanor outside of it, thinking of enemies who show bravery with great respect.[6] He is a religious man willing to wear plate armor while sailing because he has no fear of drowning.[7] According to George R. R. Martin, Victarion is "dumb as a stump"[8] and "a dullard and a brute".[9]

The Lord Captain wears heavy grey chain mail over boiled black leather.[3] When preparing for combat, Victarion also wears heavy plate.[10] He wears padded gloves underneath his iron gauntlets of lobstered steel plate.[7] Victarion's tall black warhelm is decorated with an iron kraken, whose tentacles coil down below his jaw.[3] He carries a longsword and a dirk,[3] but prefers to use his fearsome steel axe[11] with a shield.[7] Victarion's cloak is made of nine layers of gold cloth sewn like the kraken of his House, and its arms reach his boots.[3] 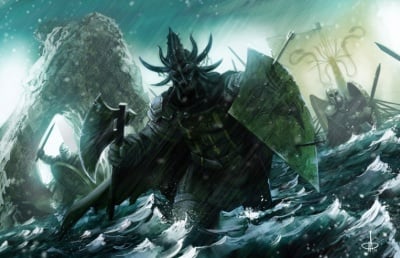 Victarion and his two eldest brothers, Balon and Euron, convinced their father Quellon, Lord of the Iron Islands, to join Robert's Rebellion, and they raided the Reach late in the war. After Quellon was killed in a battle at the Mander, however, the new Lord Balon returned to the Iron Islands with his younger brothers.[12][13]

Victarion recognized the greatness of Balon and followed him loyally. He commanded the great fleet constructed by Balon, the Iron Fleet, during Greyjoy's Rebellion. During the rebellion, using a plan Euron had concocted, they sailed into Lannisport and burned the Lannister fleet at anchor.[14] Victarion tossed the first torch onto the flagship of Lord Tywin Lannister.[3] Later in the rebellion, the Iron Fleet was smashed by Stannis Baratheon in a sea battle off Fair Isle, during which Victarion's younger brother Aeron's vessel, Golden Storm, was chopped in half by Stannis's warship, Fury.[12] After the rebellion's end, Victarion continued to serve faithfully as Lord Captain.

Victarion has wed three times: his first wife died in childbirth, birthing a stillborn daughter; his second wife was stricken by a pox; his third wife was seduced and impregnated by his brother Euron, which drove Victarion to beat her to death to retain his honor. Only the taboo against kinslaying kept Victarion from doing the same to Euron. He has not married since, nor has he forgiven Euron, who was forced into exile by Balon in 297 AC.[3][14][12] In addition to his third wife, Victarion has beaten four men to death with his fists.[3] Victarion thrashed Harras Harlaw on multiple occasions when Harras was young.[7]

In preparation for the invasion of the north planned by his brother, Balon Greyjoy, Victarion loans his steersman, Rymolf Stormdrunk, to his nephew, Theon Greyjoy. Victarion attends a feast at Pyke's Great Hall with his brothers, Balon and Aeron.[14] He is sent with the main strength of the Iron Fleet to take Moat Cailin by his king and brother, Balon Greyjoy.[14] Moat Cailin falls to the ironborn's surprise assault. Theon intends to hold Meera and Jojen Reed captive to prevent their father, Lord Howland Reed, from attacking Victarion's men, but the Reed children vanish from Winterfell.[15]

Robb Stark, the King in the North, is informed at Hag's Mire of Balon's death and the return of his exiled brother, Euron Crow's Eye. Robb thinks that Victarion will leave Moat Cailin to claim Balon's throne.[16]

Victarion wears mail and leather day and night for protection from crannogmen. He leaves a token force to defend Moat Cailin under the command of Ralf Kenning, and returns to the Iron Islands with his fleet to decide on the succession of the next iron king.[3]

Victarion makes a claim to the Seastone Chair as Balon's brother and second-in-command. He refuses the offer of his niece, Asha Greyjoy, to share rule with him as king and her as his Hand.[3] Victarion makes a strong claim at the kingsmoot on Old Wyk, but the crowd ultimately favors Euron.[11]

Despite his hatred for Euron, Victarion's obedient and dutiful nature keeps him following his king's orders. Victarion leads the taking of the Shields, slaughtering unarmored sailors and winning a duel with Ser Talbert Serry, the son of Lord Osbert Serry, but his left hand is wounded during the fight. After his victory, Victarion watches helplessly as Euron steals many of his trusted comrades away from him by giving them titles on the Shield Islands. Victarion also deplores the cruelty Euron displays toward the slain lords' women.[7]

Apparently oblivious to Victarion's hatred, Euron summons Victarion to a private meeting in Lord Hewett's castle and asks him to find Daenerys Targaryen and deliver Euron's marriage proposal. The new king explains that Victarion will receive the Seastone Chair once Euron claims the Iron Throne. Victarion agrees, but secretly plans on courting Daenerys for himself.[7] 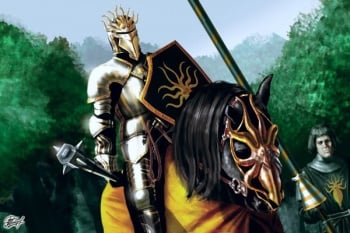 Victarion in plate armor - by Amok ©

After the yielding of Moat Cailin, Ramsay Bolton executes the small garrison left behind by Victarion.[17]

During the voyage, a red priest of R'hllor named Moqorro is discovered clinging to wreckage out at sea. The crew wants him killed, but Moqorro convinces Victarion to allow him to treat his wounded hand. Behind closed doors, Moqorro apparently uses magic on the lord captain; when Victarion emerges from his cabin, his left hand is charred and blackened.[18]

Moqorro, like Melisandre, can see the future in the flames, and uses the magic to aid Victarion in his quest. For instance, Victarion orders his crew to kill Kerwin, as Moqorro had a vision that the maester's death would bring the ship good winds.[18] The Iron Victory's crew live in great fear of Moqorro and call him the Black Flame. Victarion makes offerings to both the Drowned God and R'hllor. Moqorro also alerts Victarion that he has seen Daenerys married in the flames, but Victarion is unconcerned by this, stating "she would not be the first woman I made a widow."[19] Moqorro tells Victarion that in order to bind Daenerys's dragons to the Iron Captain's will, Victarion must claim the dragon horn Dragonbinder with blood.[19]

Just as the second siege of Meereen resumes, Victarion and the Iron Fleet arrive in Meereen's bay.[20] 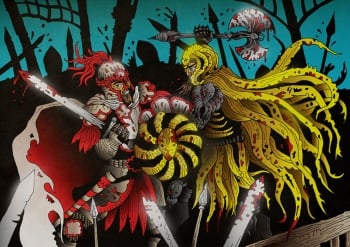 Words are wind, and the only good wind is that which fills our sails.[3]

—Victarion to his captains

When Balon was wed, it was me he sent to Harlaw to bring him back his bride. I led his longships into many a battle, and never lost but one. The first time Balon took a crown, it was me sailed into Lannisport to singe the lion's tail. The second time, it was me he sent to skin the Young Wolf should he come howling home. All you'll get from me is more of what you got from Balon.[11]

—Victarion at the kingsmoot

A wolf is not a a kraken. What the kraken grasps it does not lose, be it longship or leviathan.[11]

May he feast as he fought, in the Drowned God’s watery halls.[7]

Wizards may be well and good, but blood and steel win wars.[7]

—Victarion to the dusky woman

There is no wine so sweet as wine taken from a foe. One day I shall drink your wine, Crow's Eye, and take from you all that you hold dear.[7]

I beat her to death with mine own hands, but the Crow's Eye killed her when he shoved himself inside her. I had no choice.[7]

—Victarion's thoughts regarding his third wife

Euron: It is a fearsome thing to sail beyond Valyria.
Victarion: I could sail the Iron Fleet to hell if need be.[7]

The most beautiful woman in the world has urgent need of my axe.[19] 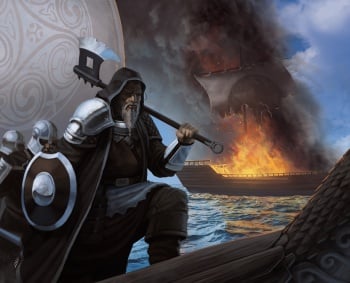 Lord Captain of the Iron Fleet, and a fearsome warrior. I have heard them sing of him in the alehouses.[14]

Victarion is like some great grey bullock, strong and tireless and dutiful, but not like to win any races. No doubt he'll serve me as loyally as he has served my lord father. He has neither the wits nor the ambition to plot betrayal.[14]

You ought to have no trouble catching our uncles. One is drunk on seawater, after all, and the other is a great grey bullock so dim he'll probably get lost.[14]

The king must be Victarion, or the storm will slay us all.[12]

He shall be our king. What man could look on him and doubt it?[11]