Cressen is a maester of the Citadel in service to Stannis Baratheon, Lord of Dragonstone. He is the POV character in the prologue of A Clash of Kings.[2] In the television adaptation Game of Thrones he is portrayed by Oliver Ford Davies.

At nearly eighty years old, Cressen is frail with a bad hip, causing him to have trouble walking. The maester has wrinkly, thin skin and trembling hands.[2]

Cressen loves Stannis Baratheon and is shameful of the sadness of Stannis's daughter, Shireen. He does not feel at home at Dragonstone, although he has grown fond of its gargoyle decorations. The maester is unable to climb to the rookery.[2]

Maester Cressen served as the maester of Storm's End. When Lord Steffon Baratheon and his wife Cassana Estermont died in the wreck of Windproud in Shipbreaker Bay, Cressen raised the Baratheon children. His favorite was Stannis, who needed Cressen more because he lacked the charm of his brothers. Cressen came to regard Stannis as the son he never had.[2]

Following Lord Steffon's shipwreck, Cressen helped identify the deceased. When the fool Patchface washed ashore three days after the shipwreck, Ser Harbert, the castellan of Storm’s End at the time, insisted the fool be put to death, but Cressen refused to agree. In the end, Cressen won the argument.[2]

Cressen was at Storm's End when it was besieged during Robert's Rebellion. When Ser Gawen Wylde and three other knights were caught trying to sneak out a postern gate to surrender, Stannis, who held command, prepared to have them hurled at the Tyrell host via catapult. Cressen convinced him instead to imprison the men, pointing out that the garrison might at some point be forced to eat their dead, and the four knights were "good meat".[4] Cressen attended the knighting of Ser Davos Seaworth by Stannis after the siege.[2]

When Stannis was named Lord of Dragonstone by his brother, King Robert I Baratheon, Cressen followed him to the ancient stronghold. In 297 AC, Cressen fell and broke his hip. In 298 AC, when Cressen fell ill, Stannis requested the Citadel to send him a replacement for Cressen. In response, Maester Pylos was sent to Dragonstone.[2]

As a result of his long service to Stannis, Stannis has always confided in Cressen.[5] 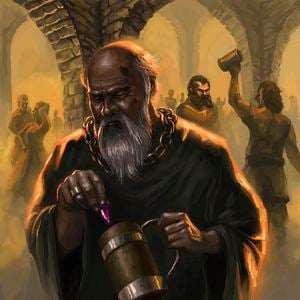 Cressen receives Shireen Baratheon and Patchface when they come to see the white raven the Citadel has sent to the island to announce the end of summer. He attempts to sooth her worries about being eaten by a dragon, and discusses the red comet with her.[2]

After Stannis Baratheon declares himself king he unsuccessfully sends messengers to gather support for his claim, with only the vassals of Dragonstone supporting him. The lords of the stormlands support Stannis's younger brother, Renly Baratheon, who has claimed the Iron Throne as well. Cressen advises Stannis to ally with the Starks and the Arryns, but Stannis insists that those crowning Robb Stark as King in the North are committing treason. Stannis's queen, Lady Selyse Florent, urges Stannis to rely solely on R'hllor and says that Renly will die soon, according to Melisandre, a red priestess. Cressen thinks that Selyse is suggesting fratricide, and is shocked when Stannis dismisses him to listen to Selyse's counsel. Blaming Melisandre and her "madness", he plans to kill her.[2]

Stannis commands Maester Pylos to let Cressen rest, but Cressen insists upon attending the feast that night. After Patchface collides with Cressen and causes the old man to fall, Melisandre places the fool's belled helm on Cressen's head, which the maester removes. Because of Cressen's age, Stannis announces he will now be taking counsel from the younger Pylos. Cressen is eventually seated beside Ser Davos Seaworth. He puts the strangler, a potent poison, in Davos's cup of wine, shaking off the knight's hand and protest. Instead, Cressen invites Melisandre to drink the cup with him. Apparently aware of Cressen's plan, Melisandre suggests he can still spill the wine, but Cressen insists that they share the cup. Melisandre drinks the majority of the wine and remains unaffected. When Cressen drinks the final sip, the poison kills him.[2]

After Cressen's death, the gossip on Dragonstone is that Cressen had challenged R'hllor and been struck down for his impiety.[6] When Davos meets with Stannis after the burning of Dragonstone's wooden statues of the Seven, Stannis admits that he had not wanted Cressen at the feast. Despite his anger at the maester's counsel, Stannis had not wanted the old man dead.[6]

Aboard the Bountiful Harvest Davos wonders if Melisandre can be killed by mortal weapons, recalling Cressen's attempt to kill her with poison.[7]

When climbing up the narrow twisted steps of Sea Dragon Tower, Davos is reminded of Cressen, who had a lot of trouble climbing the steps of the tower after he had broken his hip.[5]

When meeting with his the small group of king's men, just before Edric Storm is secretly shipped away, Davos reminds them that when Maester Cressen attempted to kill Melisandre she knew at once.[5]

In Oldtown, the elderly Archmaester Walgrave sometimes confuses the novice Pate with Cressen.[3] 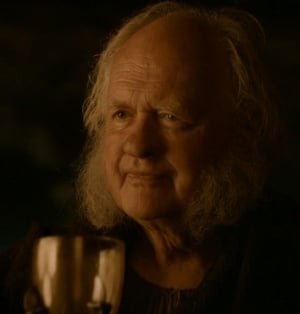 Oliver Ford Davies as Cressen in Game of Thrones

Talking gargoyles and prophecies in the sky. I am an old done man, grown giddy as a child again. Had a lifetime's hard-won wisdom fled him along with his health and strength? He was a maester, trained and chained in the great Citadel of Oldtown. What had he come to, when superstition filled his head as if he were an ignorant fieldhand?[2]

When a maester donned his collar, he put aside the hope of children, yet Cressen had oft felt a father nonetheless. Robert, Stannis, Renly ... three sons he had raised after the angry sea claimed Lord Steffon. Had he done so ill that now he must watch one kill the other? He could not allow it, would not allow it.[2]

Melisandre: Now here is a riddle. A clever fool and a foolish wise man. A crown to match your chain, Lord Maester.


Cressen: I need no crown but truth.


Melisandre: There are truths in this world that are not taught at Oldtown.[2]
—Melisandre and Cressen

Davos: My liege, Pylos is pleasant enough, but I cannot see the chain about his neck without mourning for Maester Cressen.
Stannis: Is it his fault the old man died? I never wanted Cressen at that feast. He'd angered me, yes, he'd given me bad counsel, but I did not want him dead. I'd hoped he might be granted a few years of ease and comfort. He had earned that much, at least, but—but he died. And Pylos serves me ably.[6]

Davos: Cressen had wisdom.
Stannis: I trusted in his wisdom and your wiles, and what did they avail me, smuggler?[6]

I had a maester on Dragonstone who was almost a father to me.[8]