The siege of Moat Cailin occurs during the War of the Five Kings. Northern forces under the command of Ramsay Bolton besiege the skeleton garrison left by the ironborn at Moat Cailin after the departure of Victarion Greyjoy and the Iron Fleet.

After the fall of Moat Cailin, the ironborn garrison holding the ruins prevents the northmen of Robb Stark, King in the North, from returning north of the Neck. The northmen march north to the Twins to attend the wedding of Edmure Tully to Roslin Frey, and Robb learns at Hag's Mire that Balon Greyjoy, the self-styled King of the Isles and the North, has died at Pyke. Robb's plan to recover Moat Cailin involves sending Galbart Glover and Maege Mormont into the Neck to find Howland Reed and alert his crannogmen. Greatjon Umber and Roose Bolton are to command the vanguard and rearguard, respectively, as they march from the Twins along the causeway to Moat Cailin. Meanwhile, the crannogmen are to guide the rest of Robb's forces through the swamps of the Neck, so that the ironborn at Moat Cailin can be surprised by Robb from the north while the Greatjon and Roose attack from the south.[2]

Robb's plan to recover Moat Cailin never develops, however, as the king and most of his men are killed at the Twins during the Red Wedding.[3] Roose Bolton, who conspired with Walder Frey and Tywin Lannister, is named Warden of the North by the Iron Throne for his part in Robb's death.[4]

When Lord Captain Victarion Greyjoy departs with nine-tenths of the Iron Fleet for the kingsmoot on Old Wyk, he leaves command of Moat Cailin to Ralf Kenning.[5] Unbeknownst to the garrison, however, Victarion is ordered by the new king, Euron Greyjoy, to lead the fleet to Essos after the taking of the Shields.[6] Reinforcements for Ralf's garrison at Moat Cailin never show up. To make matters worse, the already small garrison is then slimmed down by guerrilla attacks from the crannogmen, whom they call bog devils;[7] Harren Botley is among the victims.[8]

To allow the passage of his army without taking significant casualties, Lord Roose Bolton assigns his legitimized bastard son, Ramsay, with the task of capturing Moat Cailin from the north, where it is more vulnerable. The Ryswells and Dustins surprise and burn the remaining longships of the Iron Fleet in the Fever River.[9]

Ramsay Bolton gathers a large force of northerners, including Boltons, Hornwoods, and Cerwyns, as well three hundred Umber spearmen and a hundred archers led by Hother Whoresbane. Ramsay's force is to rendezvous with the Ryswells and Dustins and then take the fortress.[9] After Ramsay arrives, one of Lord Rodrik Ryswell's sons, Roger or Rickard, states the ironborn have withstood three northern attacks already.[7]

Ramsay sends his servant "Reek", actually the traumatized Theon Greyjoy, to the castle "disguised" as Theon, the son of Lord Balon Greyjoy and the garrison's prince. Theon is to offer the garrison terms of surrender: if the ironborn lay down their weapons and come to the Bolton camp unarmed, Ramsay will feed them and send them home to the Iron Islands. Theon is nearly struck by a crannogman's arrow while traveling to the ruins; blood-blooms flourish among nearby corpses.[7] Theon spots pale faces on the battlements of the Gatehouse Tower and along the broken masonry atop the Children's Tower.[7]

Once inside Moat Cailin, Theon discovers the garrison has been weakened by poisoned arrows and contaminated water. The cellar's vaults have flooded, so corpses are now left where they fall. All of the ironborn within the Children's Tower have died, save two cannibals eating the corpses, who were then executed by Dagon Codd. The nominal commander of the garrison, Ralf Kenning, is now incapacitated and near death on part of a poisoned arrow. Theon puts him out of his misery by slitting his throat before offering his terms to the leaderless remaining ironborn, many of whom are from the ill-regarded House Codd.[7] 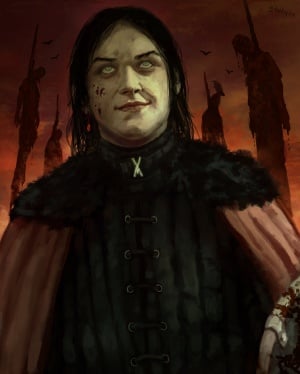 Ramsay has the surrendering ironborn flayed and displayed on pikes.

Dagon Codd is opposed to the plan and distrusts the Boltons. However, he is killed with an axe to the head by Adrack Humble, who is then convinced by Theon to accept the terms on behalf of the other soldiers. Theon learns there are a mere 65 ironborn left—18 at the Drunkard's Tower and 47 at the Gatehouse Tower—and only 58 of them are combat capable. The fortress is defensible enough that the defenders could have inflicted three to one casualties on the attackers if Ramsay tried to take the position by storm, however. The 58 able-bodied men carry out five who cannot walk, while leaving two who are near death to die, as there is no hope for them. They follow the directions and lay down their weapons before the Bolton forces.

Before allowing them to travel to the Stony Shore to seek transport, however, Ramsay reneges on the deal and has all 63 of the remaining ironborn flayed alive. He then puts their still-bleeding bodies upon pikes along the causeway.[7]

With Moat Cailin retaken, Roose's host, consisting of 4,000 northerners (almost entirely his own Bolton men) and 2,000 Freys, is able to march past the Neck and on to Barrowton.[7][10]

Moat Cailin has fallen, Reek realized then, only no one has seen fit to tell them.[7]

The Lord of the Dreadfort will bring his knights up the causeway, whilst his son leads his own men down on you from the north. No quarter will be granted. The ones that die fighting will be the lucky ones. Those who live will be given to the bog devils.[7]