The Dothraki refer to Westeros as Rhaesh Andahli, the land of the Andals.[2] Ser Jorah Mormont, a northman, is called "The Andal" in Essos,[3] even though the Andal influence is less in the north of Westeros.[4]

The Andals were a tall and fair-haired people[5][6] said to have originated in the Axe of northern Essos,[7] although some say they came from south of the Silver Sea.[8] They migrated and established Andalos in northwestern Essos, stretching south as far as the Flatlands and the Velvet Hills and engaging in conflict with the tribes that inhabited those lands, such as the so-called "hairy men".[7] Legend tells that they were visited by the incarnations of the Seven, who crowned their first king, Hugor of the Hill.[9] They learned the art of working iron from the Rhoynar who lived along the Rhoyne.[9]

Maesters generally believe that the Andals fled because of the expanding Valyrian Freehold.[7] The Valyrians established Myr in place of a walled Andal town,[12] and many of the Valyrian colonists of Pentos intermarried with local Andals.[13] Archmaester Perestan suggests that Norvos was originally founded by Andals.[14] Before the Scouring of Lorath by Valyrian dragonlords, the Lorathi isles were ruled by Qarlon the Great, who desired to be King of All Andals.[15]

Main article: Coming of the Andals 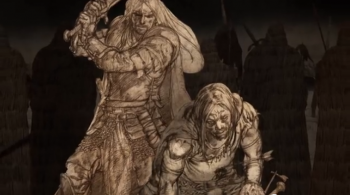 An Andal about to behead one of the First Men. Screenshot from Game of Thrones Blu-ray content.

After several hundred years of war, the Andals conquered or married into the southern kingdoms of the First Men and created their own. Only the Kings of Winter resisted the Andals successfully, stopping them at Moat Cailin.[5][7]

According to legend, at some point in time at the Nightfort, the Rat Cook served an Andal king, possibly Tywell II Lannister or Oswell I Arryn, a pie made of bacon and, unknown to the king, the king's son. 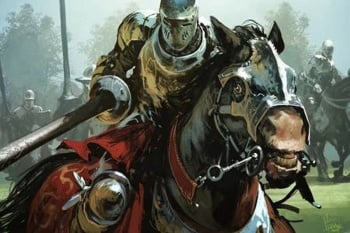 Andal culture is marked by the strong influences it has had on the culture of the Seven Kingdoms. The Andals brought the Faith of the Seven to Westeros and with it the warrior tradition of the knight. The Andals used iron, while the First Men used bronze. The Andals also brought a superior writing system that supplanted the First Men's runes.

Almost all of the early history of Westeros was written after the Andal invasions, causing it to have an Andal perspective.[18] Ancient Andal warriors painted and carved seven-pointed stars on their flesh.[5][19] They also carved stars into the stones of the Fingers when they first arrived in Westeros, although this practice declined as they expanded beyond the Vale.[7]

Despite their victory, the Andals were outnumbered by the native First Men of Westeros. The early Andal kings often tolerated worship of the old gods in godswoods to prevent religious turmoil,[7] although the Faith of the Seven came to dominate southern Westeros over time. According to George R. R. Martin, hardly any Westerosi are pure Andal or First Man after thousands of years of interbreeding.[20]