Generational warfare had occurred in Westeros between the First Men and the children of the forest, but the Pact between the two peoples led to four thousand years of peace and worship of the old gods by the First Men.[10] The Andals, the first new people of Westeros since the Pact, came from the hills of Andalos in western Essos. They were tall and fair-haired warriors who carried steel weapons and the seven-pointed star of their gods painted on their bodies.[6][10] Their religion, the Faith of the Seven, teaches that Hugor of the Hill and his Andals were promised kingdoms in a foreign land by the Seven, which led to the Andals sailing to Westeros. Maesters instead believe the Andals traveled west under pressure from the expanding Valyrian Freehold,[5] which conquered with dragons and forced subjugated peoples into slavery.[11] The Andals wielded iron in contrast to the bronze of the First Men, who were gradually defeated in generational wars over hundreds of years.[5]

The Fingers in what is now the Vale of Arryn was where the Andals first landed to wrest land from the First Men.[12] The First Men of the Vale were ruled by numerous petty kings, some of whom allied with the Andals instead of resisting them. The Shells and Brightstones were betrayed by Andal allies, and the Andal Corbrays claimed the Fingers. The Shetts of Gulltown allied with the Andal Graftons against the Royces, but their conflict ended with Gulltown controlled by the Andals.[13]

King Yorwyck VI Royce and his heirs led much of the resistance of the First Men to the Andals. King Robar II Royce gained the support of the Redforts, Hunters, Belmores, Coldwaters, and Upcliffs. These united First Men were able to successively defeat several Andal warlords, including the Corbrays, Graftons, and the Hammer of the Hills. However, Robar's army was routed in the Battle of the Seven Stars, and control of the Vale was claimed by the Andals of House Arryn.[13] Those First Men who did not submit to the Arryns fled into the Mountains of the Moon and became the Vale mountain clans.[5] The legend of Alyssa Arryn and Alyssa's Tears is said to be between six thousand[6] and two thousand years old.[9] 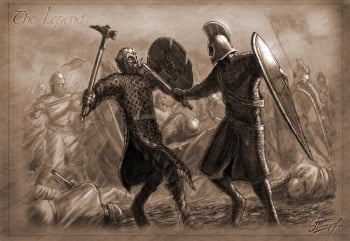 Tristifer IV Mudd is defeated in his hundredth and final battle. Screenshot from Game of Thrones Blu-ray.

After conquering the Vale, the Andal warlords continued west through the Bloody Gate or sailed up the Trident into the riverlands, where they established their own small kingdoms. Tales from the era include the Fall of Maidenpool and the death of its young king Florian V Mooton; the Widow's Ford where Lord Darry's three sons held off Vorian Vypren and his Andals for a day and a night, slaying hundreds before they were themselves slain; and the events of the night in the White Wood. The Blackwoods and Brackens allied to oppose the Andals, but were shattered by 777 charging Andal knights and seven septons, at the great Battle of Bitter River.

The greatest of the river kings to oppose the Andals was King Tristifer IV Mudd, whom the Tullys fought alongside in many of his campaigns. Tristifer is said to have fought one hundred battles, winning ninety-nine and losing only one. When Roland II Arryn, the King of Mountain and Vale, invaded the riverlands and won small victories over several petty kings, he found himself facing Tristifer, who smashed his forces and forced the Valemen into retreat. One of Roland's allies then betrayed him to the river king, and Tristifer beheaded Roland at House Mudd's seat, Oldstones.[9] Tristifer was defeated in his hundredth and final battle, when seven Andal kings attacked simultaneously and defeated him; the greatest of these conquerors was Armistead Vance.[14] His heir, Tristifer V was unable to stem the Andal tide and failed to hold his own people together, and so the Mudd kingdom fell to the Andals. To avoid being slaughtered, many of the First Men houses submitted and intermarried with the Andals.[5]

The Andals had mixed results when they invaded Crackclaw Point, which is now part of the crownlands. While the native Crackclaws had success fighting in their valleys and bogs, eventually, the Andals learned that what they could not conquer with swords they could through marriage.[15]

The Andals failed to conquer the Isle of Faces, leading to conjecture that some children of the forest survived on the Isle with the aid of the green men.[5]

After centuries of infighting between the Andal kings, House Justman was the first house to regain control over the riverlands.[2] 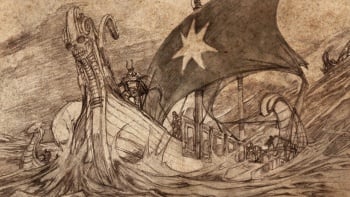 When the Andals first began crossing the narrow sea, Erich the Unready was the Storm King from House Durrandon of Storm's End. He took little interest in the invaders as he was embroiled in his own wars at th