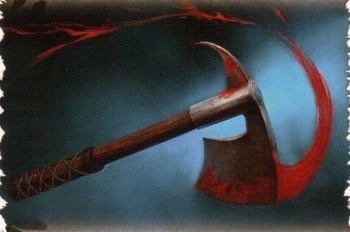 The finger dance is a traditional game and dance played by the ironborn of the Iron Islands. It is played by at least two people who throw a hand axe at each other. One must catch the axe or leap over it without missing a step. The name comes from the fact that the game usually ends with a dancer losing one or more of his fingers.[1] Fingerdancer is a longship of the Iron Fleet.[2]

According to ironborn legend, Harras Hoare, known as Harras Stump-hand, succeeded Rognar II Greyiron as King of the Iron Islands by winning the finger dance, losing two fingers in the process. Archmaester Haereg instead attributes Harras's selection as king to his marrying an Andal maiden and gaining her family as allies during the Andal invasion.[3]

Balon Greyjoy, Lord of the Iron Islands, was skilled at the finger dance by the age of thirteen.[4] During a finger dance between Balon's brothers, Aeron and Urrigon Greyjoy, fourteen-year-old Urri lost half his hand and later died of infection. The memory still haunts Aeron.[4]

During the kingsmoot, Eldred Codd loses the finger dance to Qarl the Maid when one of his fingers lands in Ralf the Limper's cup.[5]

Drunken ironborn play the game at Oakenshield Castle during the taking of the Shields.[6]