Prince Aemond Targaryen, also known as Aemond One-Eye[1][2][3][4] and Aemond the Kinslayer,[3] was a member of House Targaryen. He was the second son of King Viserys I Targaryen by his second wife, Queen Alicent Hightower, and the younger brother of King Aegon II Targaryen.[4][5][6] Like his siblings, Aemond was a dragonrider, and rode the dragon Vhagar.[3][4]

At birth, Aemond was said to be half the size his older brother, Aegon, had been, though he was twice as fierce.[4] At the age of ten, Aemond lost his right eye during a fight with his nephew Lucerys Velaryon.[4] Subsequently Aemond took to putting a sapphire in place of the missing eye.[3] Aemond was also known to wear an eye patch over his sapphire eye at times, apparently when he was in open court and did not want to frighten noble ladies with his scars (such as when he was in the Round Hall of Storm's End with Borros Baratheon's wife and daughters).[7]

As a child, Aemond was bold, wild, willful, hot-tempered and unforgiving, and grew to be a proficient and dangerous swordsman.[4] As a young man, Aemond wore night-black armor, chased with gold.[3]

Aemond was born in 110 AC to King Viserys I Targaryen and his second wife, Queen Alicent Hightower. He had two older sisters, Rhaenyra, Viserys's daughter by his first wife, and Helaena, and an older brother, Aegon. Aemond would later also have a younger brother, Daeron.[4][6]

The births of Aemond and his older brother Aegon were the cause of some strife at the court of Viserys I. The king had named Rhaenyra, his only surviving child by his first marriage, his official heir in 105 AC, but refused to change the order of succession after the birth of two healthy sons. This eventually led to the rise of the "queen's party" at the royal court, as opposed to the "princess's party". Additionally, Prince Daemon Targaryen, the younger brother of King Viserys and Aemond's uncle, was said to be notably cool towards Aemond and Aegon, as their births had pushed him back even further in the line of succession as well.[4]

The enmity between Aemond's mother, Alicent, and older half-sister, Rhaenyra, was passed on to their children. Aemond and his siblings became bitter rivals to Rhaenyra's three sons, Princes Jacaerys, Lucerys and Joffrey Velaryon, resenting them for stealing their birthright, the Iron Throne. The time the six boys were forced to spend together (e.g. attending feasts, sometimes training together at arms or studying under the same maester) only caused to increase this dislike.[4]

In 120 AC, when Aemond was ten years old, his brother-in-law, Ser Laenor Velaryon, died. Aemond accompanied his parents and siblings to Driftmark to attend Laenor's funeral. King Viserys had suggested traveling to Dragonstone after the funeral, and informed Aemond, who out of all his siblings was the only one yet without a dragon of his own, that he could claim a dragon egg or hatchling on Dragonstone for his own, if he was "bold enough". Annoyed by his father's comment, Aemond resolved to claim Vhagar, the eldest of the dragons, who had recently become riderless with the death of Laena Velaryon. Vhagar was present on Driftmark, and Aemond, who knew that his parents would not allow him near the dragon, went to make his attempt in secret.[4]

Aemond was caught by his three-year-old nephew, Prince Joffrey. In an attempt to keep him quiet, Aemond slapped and threatened the younger boy, before shoving him into a pile of dragon droppings. When Joffrey began to yell, Aemond climbed on top of Vhagar's back. The dragon broke free of her chains, and Aemond flew two circles before landing.[4] Joffrey, however, had alarmed his two older siblings, Jacaerys and Lucerys Velaryon. The four boys fought with wooden training swords, until Aemond called his nephews "Strongs". Jacaerys, old enough to understand the insult, attacked Aemond again. When Aemond gained the upper hand and began to beat Jacaerys savagely, Lucerys drew his dagger and slashed at Aemond's face, taking out his right eye. After the incident, Queen Alicent called for Lucerys to lose an eye as penance, which King Viserys refused, while Princess Rhaenyra demanded that Aemond was questioned, "sharply", until he revealed where he heard her sons being described as "Strongs" - as naming them such was suggesting they were bastards, and therefore that Rhaenyra was guilty of high treason by sleeping with Ser Harwin Strong. Forced by his father, Aemond eventually admitted hearing the name from his brother, Prince Aegon.[1][4]

While he was an unforgiving person, Aemond would later say that he considered losing an eye to be a fair trade in exchange for obtaining Vhagar.[4] Despite the loss of his eye, Aemond developed into a dangerous swordsman under the guidance of Ser Criston Cole, Lord Commander of the Kingsguard.[4]

On the first day of 127 AC, King Viserys held a feast to celebrate the return of his health. After the king had left the feast, Aemond toasted his three Velaryon cousins, speaking of their appearance, mocking them as "three strong boys".[4] 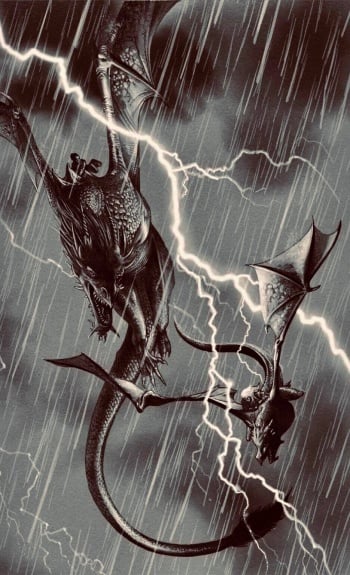 In 129 AC, when Aemond was nineteen years old, his father, King Viserys I Targaryen died. Aemond's older brother was crowned King Aegon II Targaryen, despite their older sister Rhaenyra having been Viserys's chosen heir, starting the war of succession known as the Dance of the Dragons. Aegon's supporters realized that Rhaenyra would likely resist against Aegon's coronation. As the previous Lord of Storm's End, Boremund Baratheon, had been a supporter of Princess Rhaenys Targaryen, Rhaenyra's mother-in-law and one of her supporters, the greens feared that Lord Borros Baratheon, the new lord, might side with Rhaenyra as well. Aemond was sent to Storm's End to convince Lord Borros to support Aegon by promising to marry one of his daughters.[3]

While Aemond was at Storm's End, Lord Borros received a visit from Prince Lucerys Velaryon, who had come to speak on behalf of Rhaenyra. Aemond attempted to provoke Lucerys, who ignored his cousin. When Aemond threatened Lucerys, stating he owed him an eye, Borros refused to allow them to fight under his roof. Borros's men restrained Aemond, allowing Lucerys to leave the hall and take off on his dragon, Arrax. When Borros's daughter Maris taunted Aemond, asking him if Lucerys had removed his balls as well as his eye, Aemond became enraged. When he asked Borros's leave, Borros told Aemond that he had no say about what Aemond did while not underneath Borros's roof, and allowed him to depart the Round Hall. Aemond mounted Vhagar and persued his cousin, avenging the loss of his eye by killing Lucerys and Arrax. Mushroom claims Aemond located the boy's corpse and removed both of his eyes to present them to Lady Maris on a bed of seaweed.[7][1][2][3][8] Aemond was known thereafter as a kinslayer among his enemies. Though his mother and grandfather despaired when they had learned of his actions, his elder brother, King Aegon II, was pleased and threw a great feast in Aemonds honor.[7] 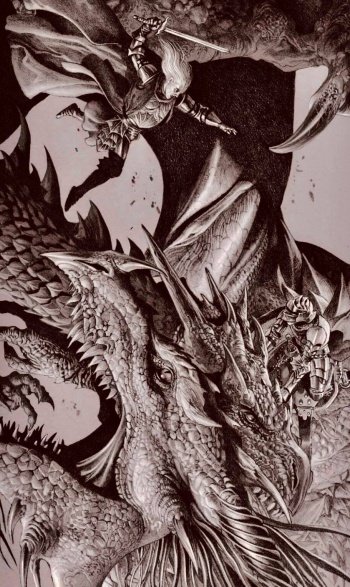 Battle Above the Gods Eye, Daemon killing Aemond as depicted by Douglas Wheatley in Fire & Blood

Prince Daemon Targaryen swore to avenge Lucerys, promising his wife Rhaenyra "a son for a son". Contacting Mysaria, Daemon arranged for Blood and Cheese to kill Aegon II's son Jaehaerys, which drove the child's mother Helaena slowly mad, eliminating her as a dragonrider.[3]

Aemond joined his brother and Ser Criston Cole in the battle at Rook's Rest, where the two brothers slew Princess Rhaenys Targaryen and her dragon, Meleys. While Aemond and Vhagar remained unhurt, Aegon was severely wounded. Aemond ruled in his stead as Prince Regent and Protector of the Realm for a year while Aegon recovered. He took up the iron and ruby crown of Aegon the Conqueror, and was said to have stated that it looked better on himself than it ever did on Aegon.[3][2]

As Prince Regent, Aemond gathered an army together with Ser Criston Cole, the Hand of the King. They marched against Prince Daemon at Harrenhal, but during their march King's Landing fell to Rhaenyra and Daemon. After recapturing Harrenhal, Aemond ordered the deaths of Ser Simon Strong and his kin. Alys Rivers was spared, however, and became Aemond's bedmate. Alys prevented Aemond from strangling the squire who informed Harrenhal of the greens' defeat in the Battle by the Lakeshore.[9] Aemond and Criston Cole split up, with Aemond taking Vhagar to burn numerous black-aligned settlements throughout the riverlands.[3] Lady Sabitha Frey seized Harrenhal and Alys, but Aemond eventually returned to rescue his lover.[9]

Prince Daemon and the dragonseed Nettles searched for Aemond and Vhagar throughout the riverlands, but were unable to find them. Eventually, Daemon travelled to Harrenhal, challenged Aemond, and waited for thirteen days with Caraxes by his side until Aemond arrived with a pregnant Alys. On the twenty-second day of the fifth month of 130 AC, Aemond and Daemon, mounted on their dragons, engaged in the Battle Above the Gods Eye. The duel ended with the two dragons crashing to the floor while Prince Daemon stabbed Aemond in his eye with the Valyrian steel sword Dark Sister. Aemond's body, chained to Vhagar's saddle, sank into the lake. His body (along with Vhagar's skull) was recovered years later, with Dark Sister still through his eye-socket.[3][2]

During the regency of Aegon III, Aemond's bedmate Alys Rivers ruled Harrenhal as a "witch queen". When Ser Regis Groves and Ser Damon Darry demanded her submission, Alys claimed that she was Aemond's widow and presented a young boy as their trueborn son and the rightful king.[10]

I have never known any one so strong as my sweet nephews, so let us drain our cups to these three strong boys.[11]

You only lost one eye, how could you be so blind?[7]